PSST - The best of the Coachella Valley and beyond, Palm Springs California 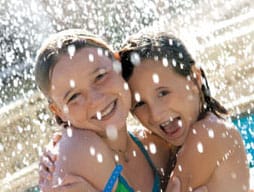 Something in the water

In addition to flagstone decking and a courtyard with a fireplace, the resort in Indian Wells has installed five luxurious private cabanas. Each waterside abode has lush designer furniture, a ceiling fan, and a volume-adjustable sound system that plays adult contemporary music. Personal attendants serve refreshments and items from a poolside gourmet menu that offers everything from fruit plates and salads to paninis and wraps. Flat-screen televisions will be installed by December. The cost: $150 per day. (The pool makeover was part of the resort’s $16 million renovation completed last February.)

Summer can be cool in the desert.

Lori Kirchner, a Palm Desert opthalmologist, plans to turn the nonprofit organization she founded into “a destination.”

Since 2000, Desert Paws has raised money solely to help local animal welfare groups and shelters. It was her husband’s idea to create the Animal Discovery and Education Center. Kirchner, her husband Peter Spiegel, also an opthalmologist, Harold Ball, and Barry Manilow — the Desert Paws board of directors — want to expand the nonprofit foundation’s reach. “We think [an education center] can have a huge impact not only on our community, but the world,” Kirchner says. “We want to set an example. Nothing like this has been done.”

“This” is a 22,000-square-foot center that would not house animals; rather, it would educate people about animals and their environment. “Our goal is to teach people — kids and their families — to have respect for all living creatures,” Kirchner says. “Seventy-five percent will be hands-on, interactive stuff for kids. We will [also] have classes and lectures and meetings for adults, everything related to animals and their environment.” Animals will only be brought in for educational purposes.

“We are also focusing very strongly on the well-known connection — which we are trying to make more well known — between animal cruelty and human violence,” Kirchner says, noting that children who torment animals often turn their aggression on humans as they grow older.

Desert Paws is looking for three to five acres of land (“hoping it can be donated, obviously,” Kirchner says), but it has developed a budget and plans to begin raising $15 million for the center, which will include a gallery, theater, classrooms, administrative offices and conference room, café with a deck, and gift shop

“We have met with many interested individuals and parties and have consulted with many people,” Kirchner says. “It’s not just a whim and a dream. This is what we are going to do.”

A pioneer on El Paseo in the early 1970s, Neil’s Apparel stands out as a desert classic. But as times change, so must retailers: Karen Billings, who recently purchased Neil’s, has begun making refreshing changes to the desert’s old friend.

“I’ve added all sorts of stuff,” says Billings, of Indian Wells. “I have gift items and accessories that were never here before.” Wallets, candles, hats, jewelry, picture frames, and purses have all been hits since she added them to the mix.

“I loved the location, loved the connectivity, loved the community,” Billings says. “I want to update the look of the store to something more contemporary, and the customers are loving it.”

The store carries the clothing lines that have supported Neil’s all along, but Billings has introduced several designers, including David Josef, Isabella, Harari, Not Your Daughter’s Jeans, Alberto Makali, and Joseph Ribkoff.

“I originally came to Neil’s for one particular line,” says Barbara Hochberg, a customer of Neil’s for the last four years. “They still carry the line, Darue, but so much more has been added. I go now to the jewelry.”

Hochberg adds, “Their people are great; they really accommodate [clients], and Karen is appealing to a lot of different price ranges. Even her displays are very creative; she gives a touch to the store.”

Indeed, Billings says that she wants the “look” of Neil’s to be more modern. “As far as restoration, the work is superficial. I put in new countertops and repainted the store, but mostly I’ve added new merchandise.”

One thing she’s keeping is the name. “Neil’s has been here forever and has such a great reputation,” she says. Changing the name, “I think would be like shooting myself in the foot — a big mistake.”

Angels in the Dust, a film co-produced by James Egan of Palm Springs and screened at this year’s Palm Springs International Film Festival, won the VARA Audience Award at the Amnesty International Film Festival in Amsterdam. The documentary about AIDS orphans in South Africa and the couple who devoted their lives to helping them made such an impact at the Santa Barbara Film Festival that residents there held private screenings in their homes to raise money for the orphans. Information: www.dolfilms.org

Cool on the course

When the umbrella shading an ailing Annika Sorenstam at this year’s Kraft Nabisco Championship broke, a volunteer rushed to her with a cooling Blubandoo necktie filled with a polymer gel that keeps the cloth moist. After the tournament, Blubandoo president and part-time Palm Springs resident Cindy Benedict gave Sorenstam another Neckbandoo to match her pink-and-chocolate outfit. Blubandoo had supplied the cool neckties to tournament volunteers. Information: blubandoo.com.

Ready for commercial space travel, Orbital Outfitters (which has operations in Los Angeles) has created the Industrial Suborbital Space Suit-Crew. Don’t worry about buying one; they’ll be supplied by your carrier. XCOR Aerospace in Mojave placed the first order. While the suits use a cooling system similar to that for auto race drivers, they have something the land-based speedsters don’t: life-support functions for “30 minutes or more” at 1,640,420 feet.