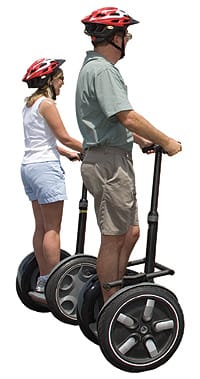 Victor Blumenthal, who owns Segways of the Desert, approached Imber about a joint venture after a visit from Blumenthal’s son, an engineer in Amsterdam, The Netherlands.

“I have [Segway] tours in Palm Desert,” Blumenthal says. “My son came out, was interested in Palm Springs and the architectural front, and suggested I get together with Robert Imber [of PS Modern Tours].”

“It’s really the [comprehensiveness] of the tour that is different and the amount of ground we can cover,” Imber says, pointing out that his minivan tour encompasses 35 miles. Additionally, about a half-hour of the Segway tour time is used for training on operating the personal transporters.

Nevertheless, the new tour costs $60 more ($125 versus $65) in order to cover Segway rental costs. But Imber reports that people are willing to pay the difference for the two-wheeled version.

“It’s not just a tour, but it’s an experience of the one-on-one, the open air,” Imber says.

Segway tours are offered the second Saturday of the month and by appointment by calling 318-6118.

One day you could walk from Palm Springs to the Salton Sea — the point being not that you could walk the 50-some miles in a day, but that there could be a trail connecting the east-west ends of the Coachella Valley.

That’s the mission of the nonprofit Coachella Valley Community Trails Alliance, whose executive director has established alliances to develop a valleywide system of paved and earthen paths for bicyclists, hikers, joggers, equestrians, and the mobility impaired.

“No public entity has the resources to plan, advocate, and build an urban regional trail system,” says LeGrand Velez, CVCTA’s executive director and only paid staff member. “You need someone to keep the focus, to coordinate with all the jurisdictions, and to keep the pressure and advocacy on a regular basis.”

“It’s interesting that the genesis of this is coming out of the development community,” says Velez, who holds a masters degree in natural resource management and has held public works positions that involved planning, constructing, and managing parks and trails. While visiting with family, he met Palm Desert developer Michael Granum, who, upon learning Velez’s background, told him about his idea for a regional urban trail system. Granum and Sam Belzberg, a developer from Canada and part-time Rancho Mirage resident, provided seed money to establish CVCTA.

Velez, who sits on the Riverside County Parks and Open Space District Trails Committee, says money to build the trails will come through city and county funds and developer contributions through conditions of building permits. “And there are federal and state funds that we can apply for,” he adds. He anticipates the project will take 25 to 30 years. “We hope to start building some sections within the next two years, probably starting in La Quinta and then Coachella.” The East Valley, he points out, is an easier starting point because it is not as built out as the West Valley.

Meanwhile, the CVCTA worked with Riverside County on a map of existing bike lanes and urban trails.