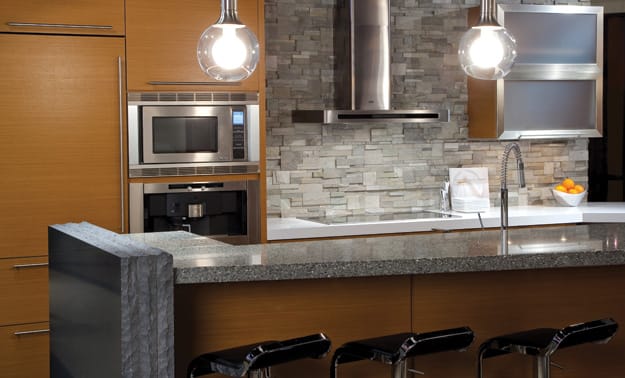 Cambria, the only producer of natural quartz surfaces in the country, made an unusual debut in the Coachella Valley: on the catwalk.

Less than a month after opening a design center in Palm Desert, the Minnesota-based company showed off a few of its colors and patterns at Fashion Week El Paseo in an art deco-inspired dress and matching handbag made with dangling pieces of stone. The company provided furnishings for the Fashion Week lounge and even brought one of its oversized bathtubs to the tent (for display purposes only, mind you).

Cambria proved itself an early supporter of the community as presenting sponsor of Fashion Week and by donating countertops to Olive Crest’s four Coachella Valley homes for abused and at-risk youth.

The Cambria Dress, designed by Candice Knox, opened the Association of Interior Designers’ Project Runway show in which local designers created couture outfits with materials of their trade. But the company earlier connected with local ASID members to create kitchen and bath vignettes for its 4,000-square-foot showroom on Cook Street.

The stone is quarried mostly in Canada and crushed in Minnesota. In fall 2008, the family company (founded in 2001) opened a distribution center in Ontario, Calif. The design center is the only one beyond Minnesota.

“[Cambria quartz] really elevates the look and feel of a high-end home,” says Summer Kath, director of marketing. “Therefore, Palm Desert was a perfect fit for a such a luxury product.”

Cambria recycles and recovers 100 percent of the water used in its production processes. The surfaces are Greenguard certified, which helps projects achieve points toward LEED certification.

Cambria will use the dress shown at Fashion Week El Paseo as a promotional tool in television appearances and other marketing efforts.