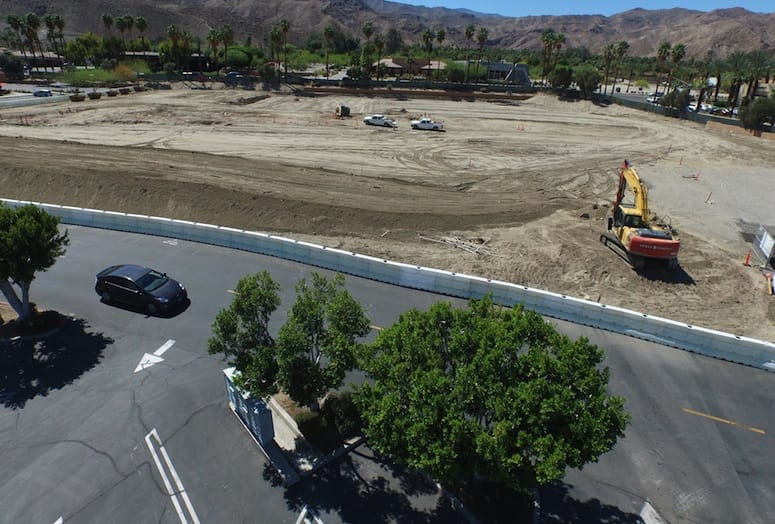 A view of the future site of CVS Pharmacy at the corner of Highway 111 and Bob Hope Drive and the Rancho Las Palmas Shopping Center in Rancho Mirage.
Photo courtesy of Paragon Commercial Group, Inc.

Despite its prime location just behind The River in Rancho Mirage, the Rancho Las Palmas Shopping Center may be the city’s best kept secret.

The main reason for that dubious distinction is its rather small, awkward entrance tucked away back on Bob Hope Drive with no access to Highway 111.

That’s about to change in a big way.

Access to the center will be improved with the ability to turn in and out from Highway 111, along with a new signal allowing a left turn on to Bob Hope Drive.

“Access is going to be significantly improved with a right in/right out on Highway 111 and a new signal allowing a left out on to Bob Hope,” says Erwin Bucy, principal of Paragon Commercial Group. “In addition, there will be new public plazas, outside patios for various tenants, enhanced drought-tolerant landscaping, and Electric Vehicle Charging stations.”

The new access way is being accomplished by demolishing five buildings on the Highway 111 frontage and replacing them with a freestanding CVS with a drive-thru and a future restaurant pad. “This not only opens up the visibility to the anchors but also to our shop tenants,” says Bucy.

“We have a neighborhood-serving tenant mix with a specialty grocer, Greens International Market, and a CVS Pharmacy," Bucy says. Stein Mart is also on board and will occupy 30,000 square feet, while Hobby Lobby's store will house approximately 48,000 square feet.

Paragon is known for its socially-responsible approach to development. “Paragon prides itself in not only working with the communities where we operate, but also creating great shopping centers,” says Bucy. One of the anchor tenants will be Stein Mart, which is expected to open in June 2016.

Paragon also spent a significant amount of time enhancing the elevations, signage, pedestrian links, access, common areas, and landscaping. “We want people to not only shop, but spend time enjoying the pedestrian-oriented spaces that we are creating,” says Bucy.

The project is expected to be completed between June 2016 and January 2017, with CVS and Stein Mart opening in the first phase followed by Hobby Lobby.

“On behalf of the City of Rancho Mirage, we are very excited to see the Rancho Las Palmas Shopping Center come back to life,” says the city’s Mayor Pro Tem, Ted Weill. “The corner of Bob Hope and Highway 111 is the second highest traffic count in the Valley and is the commercial window into our city. Our residents will enjoy the shopping experience of the new stores and dining in a new restaurant. The center will [also] make a significant sales tax contribution to the general fund.”