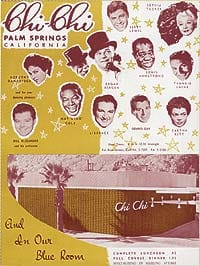 In the 1940s and ’50s, the Chi Chi was “a hip little place to come for wealthy people,” Bill Alexander says.

The Palm Springs resident should know. He saw a lot during more than 15 years he played drums and served as musical director at the Palm Canyon Drive supper club. A Chi Chi promotional piece floats faces of stars appearing at the Chi Chi, including Jerry Lewis, Sophie Tucker, Louis Armstrong, Edgar Bergen, Nat King Cole, Dorothy Dandridge — “and for your dancing pleasure, Bill Alexander and his orchestra.”

Alexander played the Starlite Room, so named for the dome with twinkling lights above the circular stage. He started in 1947 at the age of 20, fresh from the Army. From 1950 until the club closed in 1965, he held sway seven nights a week, 10 months of the year.

In season, affluent world citizens wined, dined, and danced at the Chi Chi. “It was just a very, very high-class, sophisticated audience,” Alexander says. “It was a tough room in a some ways.” But Lena Horne, whom Alexander says gave one of the best shows he ever played in his life, “cast a spell on the audience.”

From Christmas to Easter, customers were dressed to the nines. “The hat check girl would have a million dollars of fur coats,” Alexander says. “It was fun to just go by and look at the furs. They were so beautiful.”

From Labor Day until the Fourth of July, the Starlite Room hosted those in the movie industry — from actors to directors and producers to studio heads such as Jack Warner and Cecil B. DeMille, a lot of real estate professionals entertaining clients, and wealthy Los Angeles businessmen.

Shows started at 9 p.m. and midnight. “I used to stall the shows for 15 or 20 minutes if we had a big crowd,” Alexander says. “That way, they would drink more for the boss.” He would have the band warm up or he would go to the maitre d’ station and pick up the phone. So long as the audience saw something happening, they were content to wait.

“The boss” was Irwin Schulman, whom Alexander calls “a very gracious guy” with a lot of friends and connections, including Howard Hughes, a frequent Chi Chi guest. A paranoid hypochondriac who rented three homes in Palm Springs, Hughes would call Schulman before coming to town and ask him to have Mary, a Chi Chi employee, disinfect one of the houses.

When Hughes came to the Chi Chi with lovely young starlets, “the boss” ordered the band to play until he left. While they normally quit at 1:30 a.m., Alexander says, they would have to play another hour or more while Hughes seduced his female companion in a back booth.

The Chi Chi also attracted notable Mafioso, such as Sam Giancana and Mickey Cohen. Two plainclothes cops came in at least three times a night, and “the help” would inform them of hoods who had been in or “anything suspicious,” Alexander says. In the summer, a cop might come to the Chi Chi in uniform. “He would sit at the bar have a drink. Nobody thought anything about it,” Alexander says.

Schulman generally got name acts at a discount. “We used to break in a lot of Vegas revues,” Alexander says. “Sometimes we had to rehearse two days because they would have new music.” Rarely did a show bomb, but when it did — as in the case of a New York opera star — Schulman would “pay them off.”

Alexander recalls when the Chi Chi closed. “We hired the Milton Berle Revue for nine days for $45,000. I had a 25-piece orchestra, which cost around $8,000,” he says, noting that Berle “packed the joint.” But after the show, Schulman summoned Alexander to his office.

“He said, ‘Bill, I am going to have to close the joint. You saw what we did. I really didn’t make any money. I took a helluva chance. What if they hadn’t stormed the gates to see Berle? I would have lost a fortune.’” During the last few years of the Chi Chi, Schulman built the Riviera hotel, and that’s where his friends visited him after the club closed.

“It was an entirely different atmosphere than you get in show business today,” Alexander says wistfully.  “It was like Camelot.”