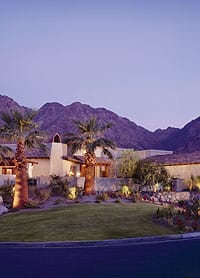 Fifteen years ago, La Quinta was a sleepy resort town of little more than 10,000 residents. It was the perfect escape for a secluded vacation, as it had been for decades. La Quinta Resort in particular catered to those who thrived in anonymity and embraced the visage of shifting sand for miles.

Today, the resort remains a hallmark of exclusivity, albeit one with massive development all around it. There’s SilverHawk Apartment Homes, an ambitious campus of resort-style rentals targeted toward young professionals (each unit comes equipped with high-speed Internet access, common areas, and a media center); Legacy Villas, a 280-unit luxury complex adjacent to the resort that aims to please with its attractive townhouse and villa plan that features a synergistic relationship with the resort (it already has a waiting list 400 deep without a single model in place); and the burgeoning middle class of the Cove, which has no central builder but continues to reflect La Quinta’s statistical makeup: young, moderately wealthy, and professional.

Why this sudden shift from a resort locale to a residential haven?

“The other cities simply built themselves out,” says Mark Weiss, La Quinta’s assistant city manager. “The eastern expansion was something we anticipated all along.”

While the city expected growth, it could not have predicted the land rush that occurred. In 1996, the city issued 1,561 building permits, of which 465 were for new homes — statistics that were fairly flat for the years directly before and after. But by June of this year, 2,655 permits had been issued, 728 slotted to home builders, putting the city on track to crush last year’s expansion of 4,051 and 1,032, respectively. More and more people are calling La Quinta their permanent home, and builders have noticed.

Many of the new home sales are for the richest 1 percent in the country, with million-dollar homes at golf destinations like The Quarry and Rancho La Quinta and the upcoming, sprawling SilverRock Resort are boosting new and previously owned home prices.

But Weiss sees La Quinta as a place where families will live. “Part of the growth had initially to do with affordable home prices,” he says. Athough the median resale home in La Quinta hovers around $400,000, Weiss thinks that may still be the case, especially with new middle-income developments like Park Place at Centre Pointe. Those developments will be one of the community’s first forays into city-style living, incorporating hotels, homes, shopping, and office space.

Perhaps what draws most people to La Quinta is the retail and leisure demands of a working population have been met in spades: there are five Starbucks outlets within a few miles (two within walking distance of each other!), a multitude of grocery stores for every budget (and more on the way), fine family dining, massive big-box shopping, boutique pedestrian opportunities in Old Town and near SilverRock, 18 parks, and golf, golf, and more golf.

Population projections suggest that La Quinta will be home to 10 percent of the entire valley by 2010, a staggering consideration, really. But happily the planners of La Quinta were wise enough not to pave paradise to put up a parking lot, opting instead to create the valley’s most vibrant city.