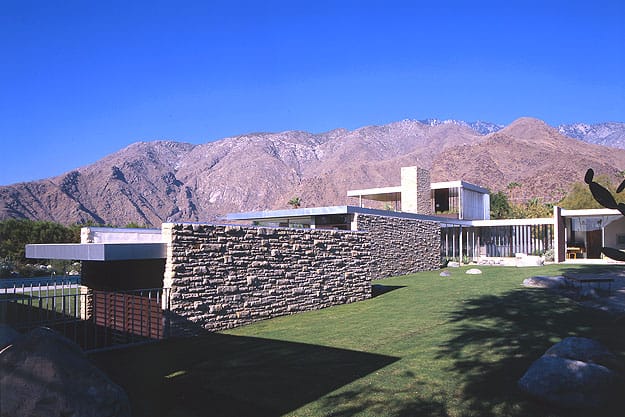 Great creative partnerships can seldom be masterminded, plotted, or planned. They often evolve in a casual, almost organic manner. And sometimes it comes down to timing — being at the right place at the right time. That’s how it was for Leo Marmol and Ron Radziner, co-founders of Los Angeles-based architecture firm Marmol Radziner. They met as students at California Polytechnic State University in San Luis Obispo. After graduation, they worked for other architects. “But we’d come across little things on the side that we could do together,” Marmol says. “We were very compatible, and slowly, over time, things developed, and we had the opportunity to work with great clients.”

Since forming in 1989, Marmol Radziner has become integral to the restoration of classic midcentury modern architecture in the Greater Palm Springs area and leaders in building new, sustainable structures that integrate indoor/outdoor spaces that define desert lifestyle.

“We’re fortunate to practice in California, where there’s a great history of architecture and a true appreciation of great architects, from Rudolf Schindler to Frank Lloyd Wright to the present,” Radziner says. “And we work in a wonderful climate that allows us to look at indoor and outdoor spaces as equally important.”

The firm designs residential, prefab, and commercial structures and often takes on the interior and landscape elements as well. “Even when our role is limited to being the architects, we still feel a strong commitment to the overall design, and that includes complete and disciplined construction documents and good details,” Marmol says.

Design integrity and attention to detail prevail in their restoration projects, which include landmarks such as Richard Neutra’s Kaufmann House; Ship of the Desert, designed by Earle Webster and Adrian Wilson; Albert Frey’s Loewy House (all in Palm Springs), and the E. Stewart Williams-designed Palm Springs Art Museum Architecture and Design Center — as well as new structures, such as Desert House in Desert Hot Springs and the Ross Residence in The Madison Club in La Quinta. This was our introduction to Palm Springs — and a glorious introduction at that,” Marmol says. Completed by Richard Neutra in 1946, the original 3,500-square-foot residence had grown larger than 7,000 square feet. “Palm Springs is so fortunate that Beth and Brent Harris purchased the house,” Marmol says. “They showed a love and commitment to history and modernism that didn’t exist at the time.” Marmol and Radziner began a five-year restoration on the house in 1994. Most of the house’s finishes had been removed, but the architects used the Neutra archives at the UCLA Special Collection Department in the Young Research Library to determine the original materials and where they were procured. “We were very inspired by the quality and commitment to building materials,” Radziner says. “Neutra had a client in Kaufmann who was willing to experiment. The floors, for example, are a very delicate, elegant white surface that’s a hybrid between concrete and terrazzo. There are many materials like this that Neutra used to express a kind of modern clarity and, from a materials perspective, it allowed us to learn a lot about that period.” Marmol Radziner also designed and built a 1,200-square-foot pool house. “It’s a beautiful place to be and to look out and view this historic home,” Radziner says Albert Frey designed this house in 1946 for industrial designer Raymond Loewy, who created 20th century icons such as the body for the Studebaker Avanti, the shape of the Coca-Cola bottle, and Shell Oil logo. The house sits directly west of the Kaufmann House. Its owners, Jim Gaudineer and Tony Padilla, approached Marmol and Radziner while they were working on the Harris’ restoration. “The two places are completely different,” Radziner says. “While Kaufmann is a pristine, perfect machine in the desert, Loewy is much more organic. It’s a rougher form of modernism and is unusual in that it sits among boulders in a natural way.” Boulders spill into the living room — the swimming pool was designed around them, and you can swim under the doors and into the room. Marmol Radziner restored the two-bedroom house and added a master bedroom suite. “Frey was alive when we were working on this project,” Marmol says. “We were able to meet him and learn about his traditions in the desert. It was our introduction to the living history of Palm Springs modernism.” SHIP OF THE DESERT
Palm Springs

Completed in 1937, this Streamline Moderne house was built for the Davidson family, owners of an East Coast department store chain. Mrs. Davidson was an early supporter of the construction of Desert Fashion Plaza in downtown Palm Springs. Fashion designer Trina Turk and her husband, photographer Jonathan Skow, purchased the house in 1998, but a fire destroyed most of the structure and delayed their restoration. The original architects, Earle Webster and Adrian Wilson, are not as well known as some others, and Marmol and Radziner were unable to turn to an archive for reference. “We did have the burned-out hulk that could be studied and documented,” Marmol says. Other elements, such as the living room’s brick fireplace and metal mantel, were preserved. One of the original house’s unusual features was a set of curved windows that slid down and disappeared into a pocket in the floor. Marmol and Radziner had them reengineered and remade by a cabinet and metal shop they opened several years ago to support their preservation work.

The new, 6,000-square-foot house — which goes into construction in March at The Madison Club in La Quinta — was designed around a series of courtyards and has a large central great room to accommodate the kitchen, dining, and living areas and an open fireplace that helps define the spaces. Bronze-colored windows, limestone floors, and 16-foot ceilings covered in cedar will create an earth-toned modern residence. “In the desert, using wood on the ceiling is a wonderful way to bring warmth into the architecture,” Radziner says. “On the floor or walls, it would get a lot of sun exposure and deteriorate over time, but the ceilings are nicely protected.” The exterior walls will be composed of ramped dirt (a mixture of earth and cement). “It has a striated effect and almost looks like the side of a stone or portions of the Grand Canyon where water has been rushing by for years.” This Desert Hot Springs prefab home built for Marmol and his wife, Alisa Becket, showcases the firm’s approach to indoor/outdoor living. Its 2,000 square feet of indoor living space is matched with 2,000 square feet of outdoor decks. The two form an L shape that surrounds and shields a pool and fire pit. “It was our first prototype in the prefab development of our office,” Marmol says. The modules are made from recycled steel, and solar panels supply the house’s electrical power. The house cantilevers over the edge of its foundation — a practical and an aesthetic consideration. “It has the illusion of floating over the landscape and sitting very lightly on the desert,” Radziner says. “But this also meant that the foundations, which were built by masons, didn’t have to align perfectly [because] the modules were going to hover over them. The house very much draws from the modern tradition, as well as pragmatic aspects, so you’re able to satisfy both those needs and have an outcome that’s more than mere materials.” The historic Santa Fe Federal Savings and Loan building, designed by E. Stewart Williams in 1960 at the corner of Palm Canyon Drive and Baristo Road, was a departure from other banks being built at the time. Instead of a solid, impenetrable fortress, the bank’s large glass walls offered a strong visual presence on the street and helped it become a part of the community. This spring, Marmol and Radziner begin a pro-bono renovation to transform the structure into the Palm Springs Art Museum Architecture and Design Center. “Part of our involvement stems from our history in Palm Springs and the support we’ve received from the museum over the years, plus we personally knew Stew Williams,” Marmol says. “It’s also a nice way to give back to a town where we’ve done a lot of work.” The firm will restore the exterior to its original appearance, which had been altered over the years with the addition of ATMs, the removal of decorative solar screens, and landscaping changes. “Our goal is to make it look the way Stew Williams originally intended, even though it will have a different use,” Radziner says. Their approach will provide the museum with the public face that the bank once had by opening it to the street. “It’s a great parallel back to the original building and a great example of public architecture.”