Rick Steves Says It's Never Been Safer to Travel in 2019 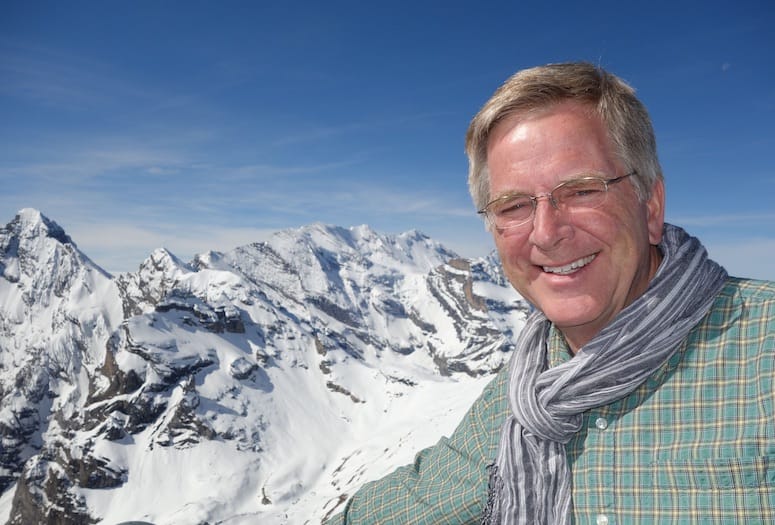 Rick Steves: " I just feel like I have an important role to play for Americans to get a grip about the rest of the world.
PHOTOGRAPH COURTESY PALM SPRINGS SPEAKS

The celebrated guidebook author and travel TV host has traveled hundreds of thousands of miles and is considered America’s most revered authority on European travel. He’s seen it all. In the 50 years since Steves took his first trip to Europe, where he visited piano factories with his pop, a successful piano importer, the man has built a travel empire with more than 100 employees in his Edmonds, Washington lair.

Now he continues to share his joy of European travel with the world. “I teach what I enjoy,” Steves says. “It’s my nature.”

Steves, who headlines a Palm Springs Speaks event March 3, dives deeper into the subject of travel in a candid conversation with Palm Springs Life.

What is it about traveling that initially generated a spark within you?

For me, it’s just very stimulating and rewarding way to spend your time and money if you’re curious. Some people aren’t. They’ll have gone to their graves having traveled to Orlando many times and seeing Disney World, and wearing a bib and doing really good barbecue, which is fine. But some people are curious about the world. To me, the world is our playground. And Europe is the springboard for me.

You note that the need for travel is even greater now. Why?

It is greater than ever right now with all the fear and ethno-centrism and confusions Americans have about the other 96 percent of humanity. I just feel like I have an important role to play for Americans to get a grip about the rest of the world. That’s the topic of my talk.

On that note, what are one or two misconceptions about traveling?

That people think it’s dangerous to travel. It’s so silly to me. It’s never been safer to travel in 2019. There’s never been a safer time to travel than right now and still people no longer say, “Bon voyage.” They say, “Have a safe trip.”

When somebody tells me to have a safe trip, I’m inclined to say, “You have a safe stay at home. Because where I’m going is, statistically, safer than where you are staying.” The most dangerous thing to do in the long term is to not travel and stay home, and let the media tell us who and what are enemies are. Fear is for people who don’t get out very much. That’s why I am passionate about my teaching.

You educate people about travel. How has that changed over the decades?

In the 1980s, it was “pack light, get a roof over your head, catch the train. Book Europe through the backdoor.” In the ’90s, it occurred to me, OK, we can catch the train, but what we really travel for is the art, cuisine, history and the culture, and I started teaching about that. Then, after 9/11, I realized that the pinnacle of travel hierarchy needs is when we get out of our comfort zone and we get to know the other 96 percent of humanity, and we are able to come home with the most beautiful souvenir and that’s the broader perspective — that’s the reason we travel. That’s why I work harder than ever to remind Americans that we celebrate the diversity of this planet. The world is filled with beautiful people. Some Americans get that, some don’t. It’s joyful to share the message.

Can you share one or two things you’ve learned about humanity while traveling, or culture for that matter?

That’s an insightful distinction to make.

We torture people because we have 9/11 baggage. We have to take care of ourselves. We lost 2,800 people 19 years ago. America. Get a grip. I don’t mean to belittle that but we have to empathize with other countries whose baggage makes our baggage look light. And it’s not a very popular thing to say, but sometimes the truth is not something people want to hear. I’m happy to share this broader perspective. I was just in El Salvador. They lost as many people as we lost in the Vietnam War in their civil war. It was basically funded by the United States because we were afraid they were going to be communists. They lost 60,000 people in a country of 5 million people. When we travel we gain that empathy.

That broader perspective is important.

You also learn about your own country by leaving it and looking at it from a distance. That’s valuable. We have a choice for travel. You can go to Mazatlan or you can go to Managua. In one, you’re going to get cheap drinks and a nice suntan. In the other, you’re going to get a better understanding of what’s south of border. And, you know, you don’t need to always wallow in heavy missions on your travels but you can combine those things. You can have the beach and the heavy reality experience. They work nicely together actually.

Is there one destination that you love most or that stands out for you?

India. It’s my favorite country. It rearranges all of my cultural furniture.