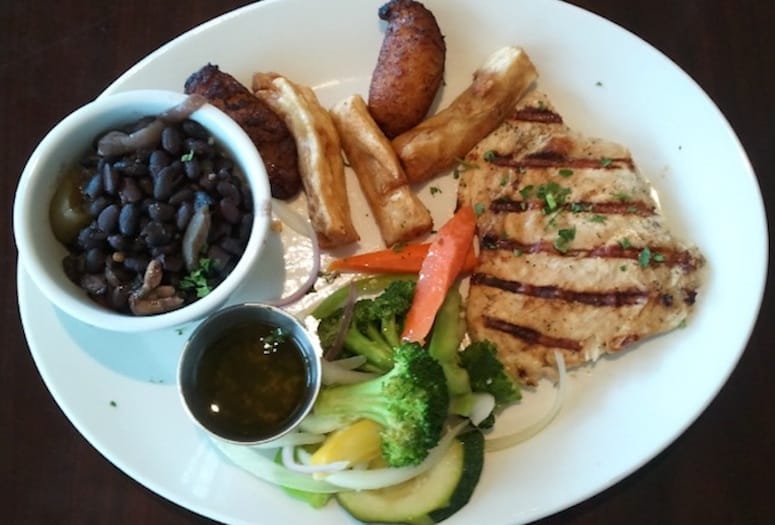 Are you looking for somewhere fun and inexpensive to dine that has a touch of old Palm Springs, but with a Cuban spin?

No, that’s not a trick question. It’s a preview of what you’ll find at Rick’s Desert Grill.

The original Rick’s Restaurant in Palm Springs has been serving breakfast and lunch for more than 28 years just a few blocks north of the Desert Grill, which serves dinner and opened about 3 1/2 years ago.

Rick’s son, Nick Seidner, explains that the Cuban-inspired menu is built off the recipes of his grandmother, who was born in Cuba.

“She had just passed away when the Desert Grill opened,” he says. “So it was kind of an ode to her. The menu includes a lot of her recipes with little twists to make them more American.”

Seidner says the ideal place for a first-time diner — or anyone else for that matter — to gain a quick introduction to the dishes you’ll find throughout the menu is to start with the Cubano Trio Stuffed Tostones appetizer.

The dish has three of the different meats featured at Rick’s starting with picadillo, or braised ground beef in a tomato sauce. You’ll also get to try lechon, a roasted pork, and ropa vieja, shredded flank steak served in a tomato Creole sauce.

“Each one comes in what we call tostones bowls, which are plantain bananas that we make an edible bowl out of,” says Seidner. “This appetizer is a good base to start things off since you get to try three meats that are in traditional Cuban dishes.”

“In terms of entrées, our most popular dish by far is the Lechon Asado [roasted pork]. It comes with Caribbean rice and black beans, sweet plantains, and yucca.”

All of Rick’s entrées also include a choice of soup or salad, accompanied by a deviled egg.

I can personally recommend the Cuban Marinade Chicken Breast, which, like the Lechon Asado, was served with Caribbean rice, and black beans, yucca, and plantains —so sweet, they were like a guilty little pleasure in the middle of the meal — along with mixed vegetables and a mojito sauce (olive oil, garlic, parsley, and cilantro).

How you use this tangy sauce is up to you, but I thought it was the perfect accompaniment to the chicken as well as a great dipping sauce for the vegetables and yucca.

While all these Cuban-inspired dishes will have you feeling like you’ve been transported out of the desert, the restaurant’s decor is firmly rooted in old Palm Springs.

Large format black-and-white photographs fill the walls and feature classic images of well-known local celebrities such as Lucille Ball at the El Mirador in 1938, and Frank Sinatra in the cockpit of his private airplane.

They are dozens more and they’re definitely worth a closer look — I felt like I was at an impromptu photo exhibit. Just go early so you can walk around and examine all the images without peering over the shoulders of your fellow diners.