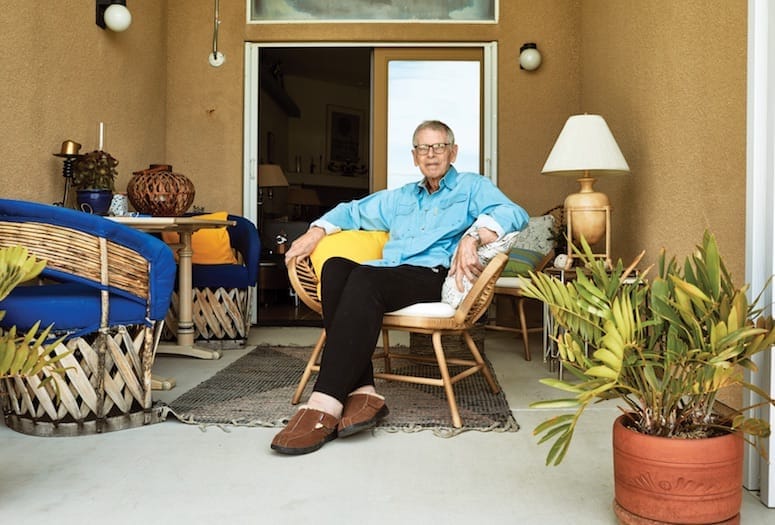 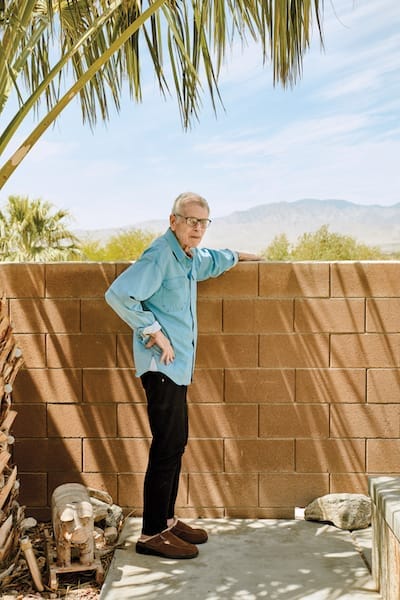 After obtaining his MFA, Cumming taught studio art at the University of Wisconsin in Milwaukee and pursued his genre-bending conceptual art. He made sculptures of an illogical nature that appeared to be utilitarian but had no utility at all; explored the possibilities of mail art, sending eccentric packages of unruly materials through the postal system and letters to randomly chosen addresses; and worked as a performance artist with elaborately designed skits. Over time, however, he grew eager to find a thriving art community where new ideas and opportunities were in the air, and he finally chose Los Angeles, primarily for its art scene but also its pop culture pedigree and gorgeous environment.

At that point, photography was becoming his medium of choice, and he has often given credit to the photo-books by Ruscha and the film industry’s continuity photographs (used to ensure exact transitions between scenes) for helping set the direction of his work. He loved the deadpan documentation of familiar sites in Ruscha’s books and was intrigued with the visual duplicity of the studio photos.

He collected the latter, struck by their quiet beauty and technical excellence as well as their strange relationship with reality. They laid claim to depicting real scenes but were actually fabrications based on the artifice of constructed sets. 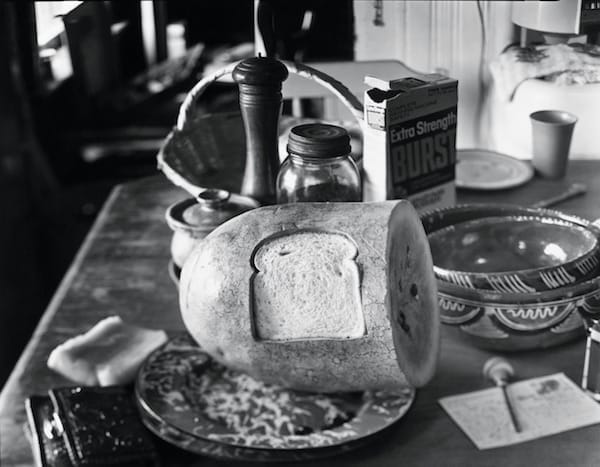 Cumming’s most famous photographs, Watermelon/Bread (1970) and Decorator Test (1974), well represent the character of the work that followed. Those who first encounter photos such as these generally find themselves in a head-scratching state of confusion as their minds race for some semblance of meaning and clarity. In Cumming’s worldview, however, meanings are fungible, truths are rarely stable, perceptions can deceive us, and photography has a slippery relationship with reality.

Watermelon/Bread presents a conventional kitchen still life, but one anchored by the odd construction of a watermelon with a slice of bread implanted in its flank. First thoughts may be of surrealist paintings that traffic in provocative imagery with jarring juxtapositions and mysterious meanings. Cumming’s photograph has the same jolting effect. Careful viewing reveals an awl beside the watermelon at the lower left, an implement used for woodcarving. Does this tool emblemize hand-wrought sculpture, referencing in turn the absurdity of a sculpture made of watermelon and bread? Under the awl lies a postcard, a reminder of Cumming’s interest in mail art and, in this ambiguous context, possibly a hint of the futility of verbal communication. Meaning is illusive here, just as, Cumming might say, it is in life. 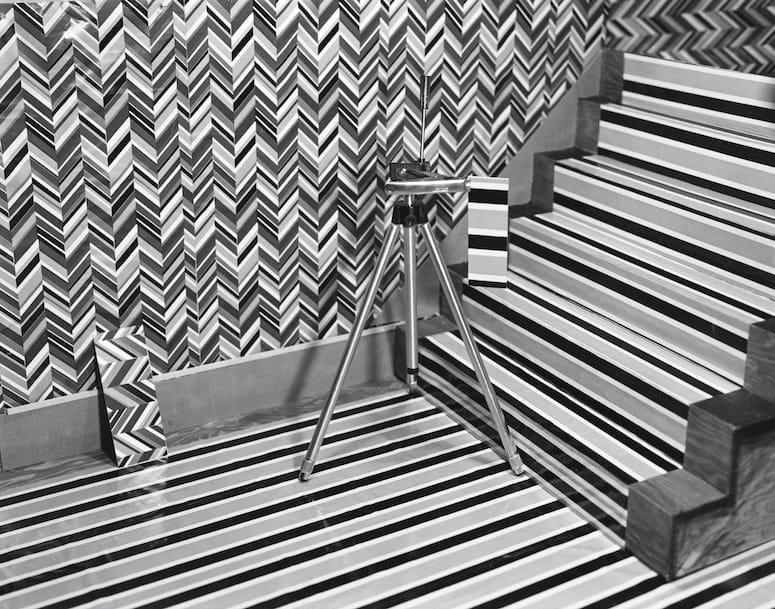 In Decorator Test, we have a visually loaded image of juxtaposed patterns with two sample patterns pulled out, one leaning against a baseboard and another hanging from a tripod, as if auditioning for the titular decorator. It seems, at first, like a creditable reality, just like the Hollywood continuity photos feel like real scenes, until clues like the truncated baseboard and the differently constructed sides of the steps announce that the atmosphere is total fantasy. Cumming typically spent a great deal of time constructing sets for his photographs. He thought of them as sculptures, and they often started as small drawings that incubated in Cumming’s mind for a few weeks until he decided which renderings would function best as sets. He once said that he sometimes wondered if he was making sculptures to be the subject of photographs or taking photos to record sculptures. 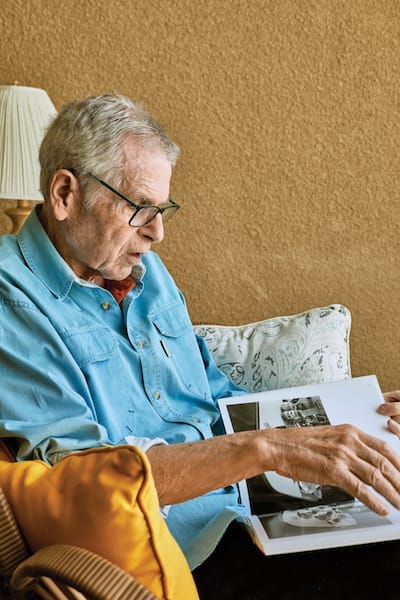 The artist flips through his monograph. 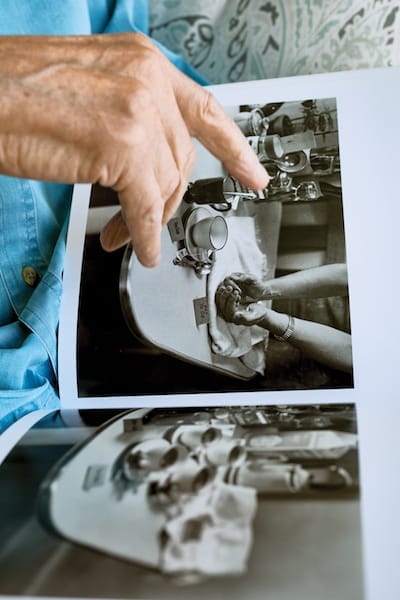 Other photographs sample aspects of Cumming’s practice. Quick Shift of the Head Leaves Glowing Stool Afterimage on Pedestal (1978) exemplifies one of his studies of positive–negative contrasts. A line down the center of the photograph divides the pictorial space into two zones: On the left is a metal stool in strong daylight, and on the right, a painted image of that stool presented as a photographic negative, thus setting up a ricocheting dialogue between painting and photography as well as reversed relationships. A can of spray paint sits atop the painting, as if crowning the winning version.

Submarine Cross-Section: Feature Film, “Gray Lady Down’ – Stage #12 (1977) resulted from what Cumming calls his documentary work, for which he was invited by different organizations to embed in their inner sanctums and record scenes as reportage. In 1977, a Universal Studios executive asked him to explore the back lot stage sets, photographing what struck his interest and hence, working from “found” sets rather than his own constructed tableaux. With this photo of a gigantic cross-section of a submarine hull, he seems to have been dazzled by immense scale and the complex environment of horizontal, vertical, and diagonal linear elements that the scene presented. His use of a large camera and 8-by-10-inch negatives allowed him to capture such scenes in stunning clarity and detail. As he did with his own constructions, he balanced on the thin edge between reality and illusion. 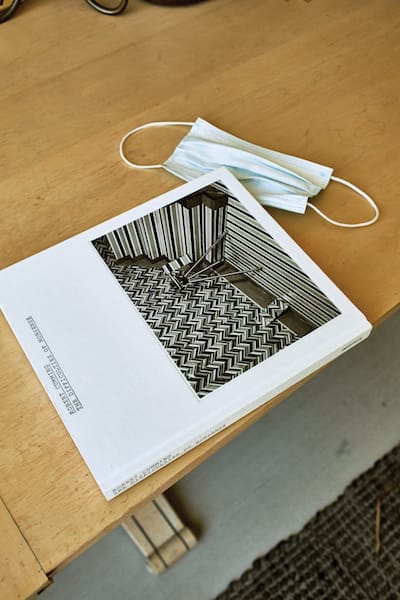 Cumming’s respect for the technology and history of photography helped to separate him from many of the other photographers working with a conceptual bent at the time. In New York in the 1970s, a number of young artists, including Sherrie Levine and Cindy Sherman, were creating their own conceptual codes. Cumming noted that, unlike himself, they and other contributors to what has been dubbed the Pictures Generation showed little interest in the history of photography and the process of picture-making, concentrating not on formal issues but instead on the radicalization of such concepts as originality and authorship. He takes pride in his dedication to craft and pictorial values. 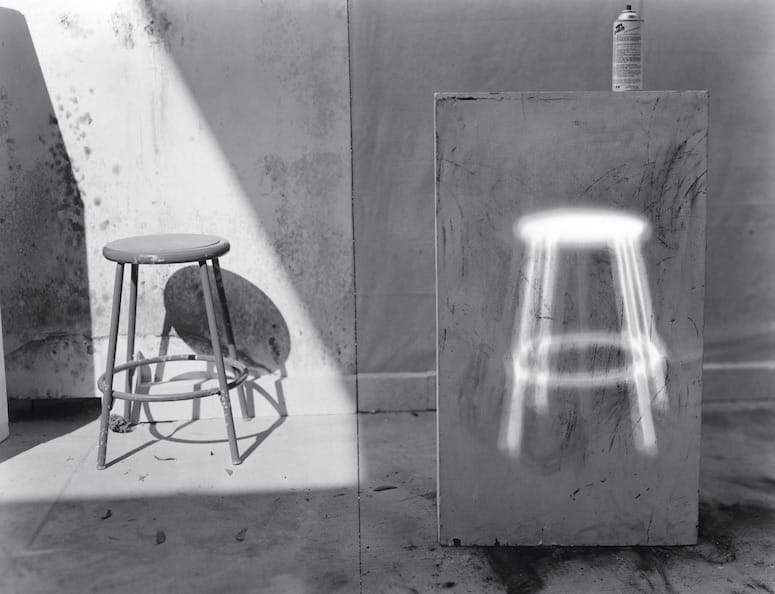 By the end of the ’70s, however, Cumming began to drift back into painting and drawing. He says that he missed the tactile pleasures of these media, the sense of making things with one’s hands. In 1978, he took a teaching job at the Hartford Art School in Connecticut, rekindling his early appreciation of charcoal, pencil, and paint. He did not abandon photography altogether but started working with color film and smaller cameras while also accepting other documentary commissions. Cumming’s move to the East Coast had another major consequence: It led to meeting the woman who would become his life partner, and who would eventually provide the reason for his return to California.

Margaret Irwin-Brandon, known to friends as Meg, was teaching in the music department at Mount Holyoke College in Massachusetts. Her specialty was Baroque music. After leaving the school, she remained in New England and founded a period instrument orchestra, Arcadia Players, for which she was both harpsichordist and director. Having grown up in California, and with a daughter and family in L.A., she was motivated to head west. She did so in 2013, and Cumming followed a few years later. The two of them made occasional visits to Palm Springs. A friend who settled in Desert Hot Springs raved about it, so Irwin-Brandon made a daring move. She bought a home there online without laying eyes on it. She loved the climate, friendly atmosphere, and coziness of her house filled with harpsichords and pianos.

In the four years since Cumming joined her, he has been a secret treasure in Coachella Valley culture. Health problems limit his ability to move around easily and have made painting and drawing impossible. But he is pleased with his relatively new setting and happily surrounded in their home by artworks from all eras of his long career. When asked if he pays much attention to the art world these days, he answers with a sly smile, “Not much!” He is excited, however, at the new prospect of enlarging select photographs and mounting them on aluminum. He says he is glad he worked with large negatives capable of reproduction in monumental sizes, as he enjoys the latest chapter in a storied career.