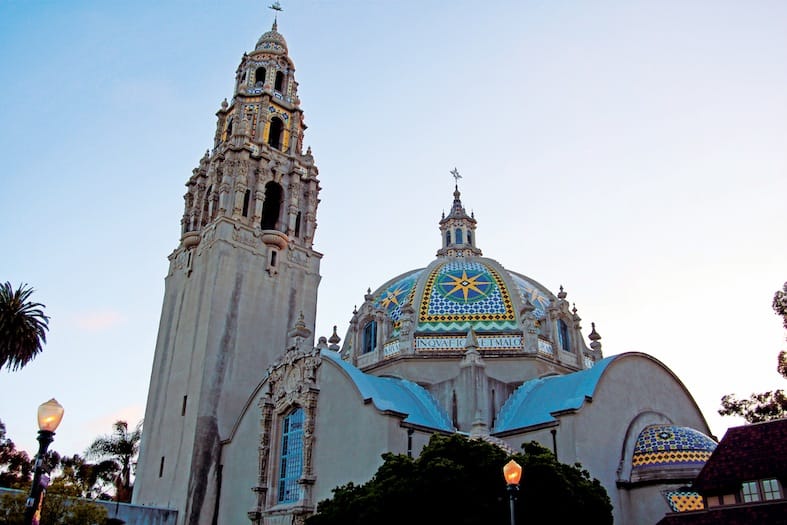 San Diego’s famed Balboa Park covers 1,200-acres to make it the largest urban park in the U.S. – even bigger than Central Park.

As the park marks its 100th anniversary this year, sometimes lost in that vast space are the architectural gems that provide context to the park’s history.

Balboa Park offers docent-led walking tours beginning with the California Building, home to the San Diego Museum of Man (pictured at right/Photo by Lydia Kremer), which was designed by noted architect Bertram Goodhue as a design hybrid, blending Plateresque, Baroque, Churrigueresque, and Rococo details to present a unique Spanish-Colonial façade.

The California Building, with its three-story tower and colorful tiled dome, is the most iconic architectural landmark in San Diego. The California Tower was opened to public tours just in time for the centennial after being shuttered for 80 years. Climb the 160 stairs to the top and you’ll be rewarded with a 360-degree bird’s eye view. Balboa Park's Botanical Bldg (1915-16) is one of the largest lath structures in the world.

The park was originally constructed to host the 1915 Panama-California Exposition commemorating the opening of the Panama Canal (apropos as San Diego was the first U.S. port of call on the Pacific). photo courtesy of the lafayette hotel

The Lafayette Hotel was built in 1946 and hosted some of Hollywood's elite.

The Colonial architecture of the Lafayette Hotel, built in 1946, is a surprise and was a frequent getaway for Hollywood A-listers like Bob Hope and Ava Gardner. The hotel’s restaurant and bar pays homage to Mr. Hope with its name — Hope 46. The lobby of the Lafayette boasts a retro chic design.

Once you settle in to this retro chic outpost, no reason to venture far for entertainment – they host monthly jazz concerts and show classic films al fresco. Also you can enjoy Normandie Wilson, a featured singer/pianist who performs in the lobby and looks like she was caught in a 1960s time warp. Around the corner to the hotel is the San Diego Improv Comedy Club, an intimate setting featuring local comedic talent.

For a retro cocktail or dining adventure, the property’s piece de resistance is the classic Red Fox Room right next door. The piano bar and restaurant with its low lighting and red leather booths look like Don Draper might drop in any minute. Johnny Weissmuller, star of Tarzan moves of the 1930s and '40s, designed this Olympic pool at the Lafayette.

Another of The Lafayette’s notable claim to fame is its Olympic-size pool that was designed by Johnny Weissmuller, six-time swimming Olympian and starred in the early Tarzan films of the 1930s and 40s. Today the pool is still a lively scene with weekend concerts. You can luxuriate in your own private cabana and enjoy the fun with poolside food and cocktail service.