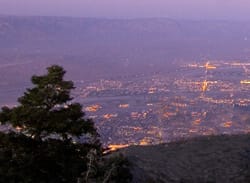 Will a million people live here by the year 2050? That’s what experts predicted at a mid-November conference in Rancho Mirage sponsored by (among others) the Urban Land Institute —Inland Empire. It’s a scary thought, but it is probably true. An estimated 410,000 year-rounders live in the valley now; add 140,000 current part-timers and you’re already at 550,000 folks — and that’s not counting tourists! Is there enough infrastructure, water, etc. to handle another half-million residents? No way. So we’d best get to work … either that or panic.

Election addendum. Michael Duran, president of the Desert Sands Unified School District Teachers Association, won a seat on his own district’s school board by defeating veteran board member Jim Koedyker. Fret not. Mr. Duran must officially resign his union job (nudge, nudge; wink, wink) before negotiating with himself on salaries and such. Cynics now see the Desert Sands board as a union shill, more about employee perks than educating kids. Mark Twain got it right: “In the beginning God created idiots. That was for practice. Then he created school boards.