From the moment he stepped on stage, Sandy Reed had found his home.

“Sandy was actually a quiet guy, kind of introspective, but when he was on stage he completely lit up,” says his mother, Catharine. “Some people just struggle learning a new craft like that; it came so natural for him.”

Next week’s Palm Springs International ShortFest will be the Palm Desert actor’s latest film on the big screen in front of his family and home crowd, but the 25-year-old will be missing after a pedestrian accident in June 2020 took his life. Reed plays David, a gay man coming home with his boyfriend in the dark horror short, Forgive Us, which screens at 7 p.m. June 24 at the Palm Springs Cultural Center as part of the Thrills & Chills category.

The festival, featuring nearly 300 short films from across the globe, opens June 22 and runs through the 28th. It is the first film festival in the state to conduct all of the screenings in person.

She has already seen the film, but Catharine will be in attendance June 24 for the ShortFest screening. "Sandy would share a little bit about the film with me," she says. "He wasn't sure how the movie was going to end. He'd have long chats with Duncan (director Duncan Hodges) on how it was going to end. When I saw it, I had a little background and I knew a little bit about where it was going. I had some chats with Duncan and producer Alex Woodruff. I'm so grateful to Alex and Duncan for seeing a light in Sandy and giving him this opportunity.” 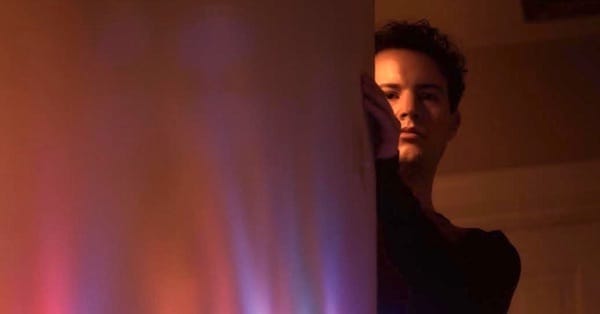 Sandy landed the role in Forgive Us through a video audition, says Hodges, and even through that medium he saw the actor he wanted to play David. “I had a conversation with (co-writer) Jono Mitchell, and we just knew his performance was super emotional and tied to the character,” Hodge says. “There was no other David for me.”

Hodges says that impression stayed true once the cast gathered for filming. “I’ll never forget how quickly I fell in love with Sandy on set, and how much energy he had,” Hodges says. “How I got a lot of questions from him, but I was also able to have more one-on-one conversations with him. I think that made me most comfortable with being able to just talk with him on the sidebars and experience the film together, instead of overthinking things by myself in my head.”

Sandy Reed first showed an attraction to acting when he was 5 years old, his mother says. “I think at that point he knew, and we all knew this would be his passion,” Catharine says. “He just completely lit up and controlled the stage. I didn't actually know where we were going, but I knew it certainly made him happy.”

While growing up in Palm Springs, he was a regular cast member in local plays produced by Children's Playtime Productions, and eventually secured bigger roles including the lead in Peter Pan and the part of Link Larkin in Hairspray at the McCallum Theatre. “I think that (playing Larkin) was kind of a turning point where we realized that he had talent and it wasn't really just going to be a dream,” Catharine says. “Now it was really becoming a reality.”

Sandy attended USC and graduated with a double major in Dramatic Arts and Cinematic Arts, and remained in Los Angeles to pursue his acting career and worked as a waiter. While working on a play in Sherman Oaks, California, Sandy decided he wanted to further grow his craft and moved to Atlanta where he joined Mornell Studios.

“Sara Mornell became a real mentor in his life,” Catharine says. “This was the last two years, and she became a real loving friend.”

While acting consumed much of his life, Catharine believes her son’s legacy will be the people he touched along the way. “Sandy led with kindness and inspired others to go the extra mile, to make someone feel acknowledged and heard,” she says. “Sandy created an amazing network of friends that became family. I think his heart is his legacy and all the other things he did were just something that he absolutely loved.”

Palm Springs Life spoke further with Duncan Hodges about the short film, Forgive Us, and making his directorial debut.

How did this opportunity come about to direct the short film “Forgive Us”?

I had a sit down conversation with the writer, Jono Mitchell. I wanted to talk to him about the opportunity of creating a film, and the world that I wanted to create. He was super onboard with it. We got work together, writing the script and ended up pitching that internally to Pineapple Cut Pictures. Everyone was super motivated, onboard, and excited about the idea. Everything came together super fast. I was really lucky. I had such creative people around me.”

What did you take away from your directing experience?

I think the biggest thing I took away was making sure that I had individual moments with each member of the cast, and making sure to focus on their character development in the film. Also being able to answer questions when they come up, but also being able to ask them questions, and gaining perspective on how they see their character versus utilizing your own internal direction was very important. I had a so-called vision for the film, but I think the performances in the film are very much a give and take of what I wanted. It was very eye opening. I was nervous a lot of the time, but I couldn't ask for a better casting crew.

Was there anything that surprised you about the experience?

I come from a military background, which helped me to be able to adjust things on the go. Being flexible was one; I didn't know how many roadblocks you're going to run into when you make a film. You've got to be prepared for pretty much anything. It's important to be able to make decisions. But you just don't know how many. I guess the surprising part was, you just don't know how many you're going to run into. It was interesting the first day to see how the run of the day was going to be. Then the rest of the film, kind of smoothened out when we got used to it.

What is the message of the film?
I wanted to talk about acceptance and make it a priority to make people think. I don't think I'm waking anybody up. That wasn't my goal. I certainly attached some violence to it. Growing up, I had a lot of anger and resentment in my personal life with my siblings. And I tried to jam all that in there as well. To answer your question more directly, I think it is just about acceptance and David (Sandy Reed’s character) working through that and coming to terms with the fact that his whole goal was to forgive his family and see if there could be this peace. And in going through that journey, we find that it doesn't always happen.