For her 41st birthday last January, Sarah Shahi’s boyfriend surprised the actress and her children by planning a Joshua Tree getaway for the brood. It was Shahi’s first time to the Southern California desert. She was instantly enamored with the juxtaposition of undulating mountains surrounding a grounding expanse, as well as a climate that reminded Shahi of her home state of Texas.

The timing was perfect, too. Shahi just wrapped production on her oh-so-steamy Netflix series Sex/Life and was gearing up to film the Warner Bros. superhero flick Black Adam starring Dwayne “The Rock” Johnson as the titular antihero from DC Comics. Mostly, Shahi notes, she simply loved “the fact that I was having cake for breakfast and tequila to wash it down.”

It’s seven months later, and Shahi is in an equally celebratory mood when back in the desert for a Palm Springs Life photo shoot. The day before, she finished the physically demanding Black Adam production in Atlanta, and Sex/Life has become one of Netflix’s most talked-about new shows since debuting in June.

However, what’s making Shahi beam the most is her mother’s reaction to a certain someone gushing about her online. “My mother is very proud,” Shahi says while perched post-shoot by a pool in Palm Springs. “She’s seen Sex/Life. She knows about Black Adam. The thing that tickled her most is that Kim Kardashian recently tweeted about me. I could come home with a bunch of awards or be praised by critics for my work, and it wouldn’t affect her, you know? She’s so grounded. But the Kardashians? That took the cake.” 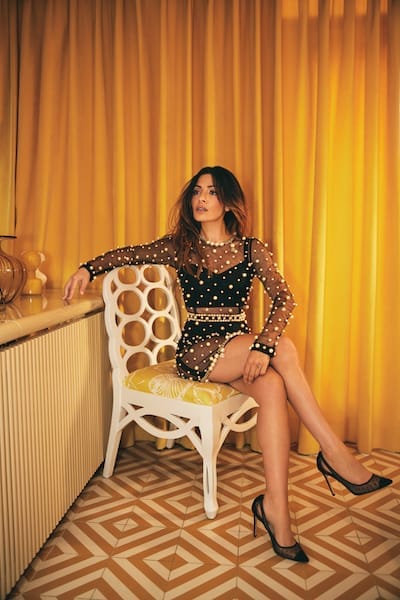 After retiring as a Dallas Cowboys cheerleader and being encouraged by filmmaker Robert Altman to pursue a full-time acting career while playing a small role in his film Dr. T and The Women in 2000, Shahi has become — as her Twitter bio cheekily points out — “that chick from that show.” For years, she hustled in Hollywood, booking guest appearances on hit series such as Dawson’s Creek, The Sopranos, and Alias then later starring in shows like The L Word, Person of Interest, and Fairly Legal.

Despite a lengthy list of credits, it’s Shahi’s portrayal of leading lady Billie in Sex/Life that’s inspiring Kim Kardashian and many others to take notice of the actress, as well as declare that the jaw-dropping drama is, in Kim K’s words, their “new fave show!!!”

VIDEO: Go behind the scenes as Sarah Shahi feels at home at The Establishment. 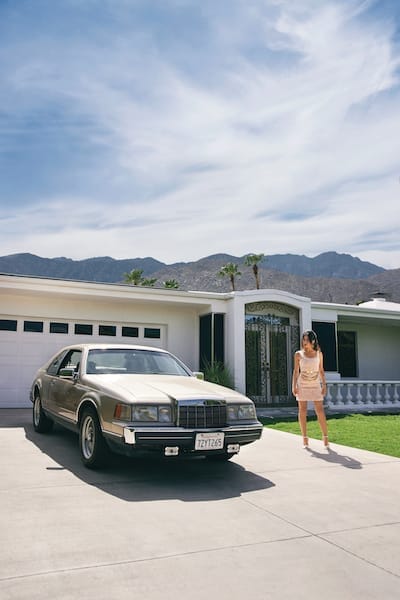 “Billie is a character I’m quite in love with for many reasons,” Shahi says. “She’s so brave. I think it takes a lot of courage to be able to say you’re not happy with something that — on paper — looks like you should be happy. She’s going through this identity crisis and awakening. I mean, in one of the opening monologues, she says, ‘My husband hasn’t gone down on me in 18 months.’ That’s a story that’s
so relatable.”

The other reason everyone is talking? Shahi is now in a relationship with her Sex/Life co-star, affable Australian actor Adam Demos, who plays Billie’s hot-to-trot ex-beau Brad. For the record, it’s serious. Very serious. “We do use the L word,” she confirms with a sly smile. “What I will say about him is that he is one of the greatest humans I’ve ever met, and it’s a privilege to be his partner in this lifetime.”

Professionally, Shahi also feels honored to star opposite Johnson in Black Adam, which features a massively multicultural cast. She plays a freedom fighter named Adrianna who’s battling a hostile takeover of a fictional nation called Kahndaq. In the comics, the influential character traditionally weds Black Adam and transforms into the superhero deity Isis, gaining power over the forces of nature thanks to a prized piece of jewelry. 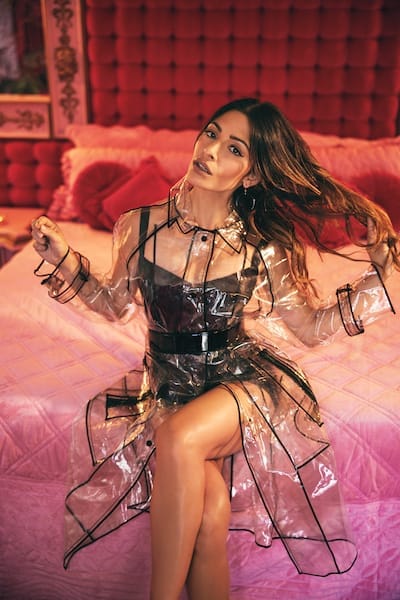 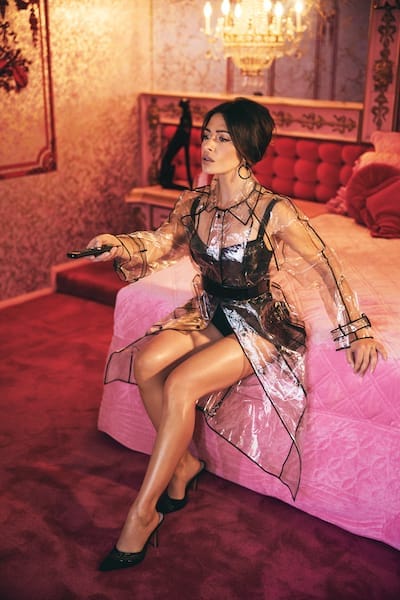 As an Iranian-American actress — Shahi’s birth name is Aahoo Jahansouzshahi — she was particularly inspired to work on a big-budget film where Middle Eastern actors aren’t just playing bad guys this time around. Growing up in small-town Texas, Shahi says she was the only Persian kid in school and frequently faced bullying for looking different.

“Those kinds of roles, especially for Middle Eastern actresses, don’t come around often, so it’s a privilege to not only be this incredibly strong woman on screen but also be able to represent the Middle Eastern community,” she says. “A lot of times we’re hired for roles that are The Terrorist or, if you’re a woman, The Terrorist’s Wife or The Finger-Shaking Girlfriend, and your story solely relies on the man.” 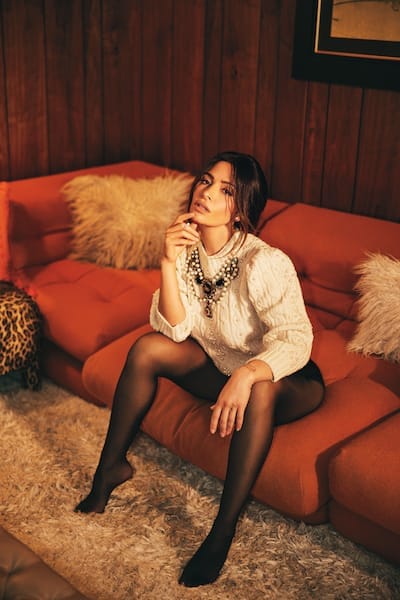 Shahi overcame several fears during the grueling shoot, which mostly took place on Atlanta soundstages. It was her first time acting in a CGI-heavy project where green screens are de rigueur and stunt work is as important as line delivery. Dangling in the air for hours by wires was a particularly challenging assignment for the actress.

“I thought I was going to die when I had to do this one stunt up there,” Shahi says. “I was actually in my trailer crying, but I did it — and I nailed it. Now, I’m going to be so proud when the movie comes out, and I can sit there and say, ‘I did all of my own stunts. I did everything myself.’”

Unlike the racy Sex/Life, which features every cast member in various states of undress over the course of eight episodes, Shahi is jazzed that Black Adam is a project that will be safe for all three of her children — 12-year-old William and 6-year-old twins Violet and Knox — to watch when it’s released in theaters July 29, 2022. 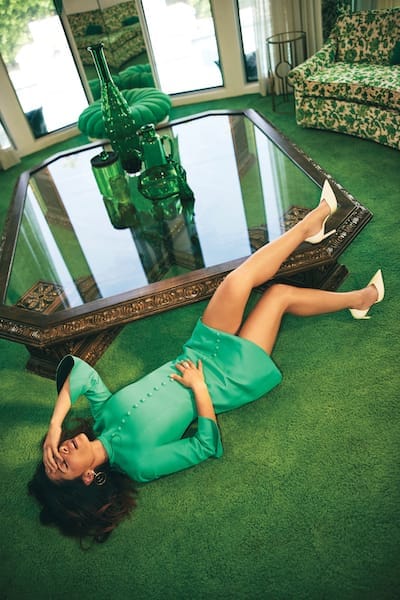 Shahi won’t spoil whether she actually dons Isis’ iconic goddess garb in the movie, but she teases that Adrianna’s wardrobe is more relaxed than the pearl-studded Chanel dress and transparent Prada trench coat she rocked while posing at The Establishment, a Palm Springs vacation rental that’s been frozen in time with its original 1969 furnishings.

“It was not like the September issue of Palm Springs Life!” she says of her Black Adam wardrobe. “That’s for sure. My character lives in this fictional Middle Eastern desert world, so I was wearing utility boots, cargo pants, tank tops, and motorcycle jackets when I needed to get a little rough. It was earthy and comfortable.” 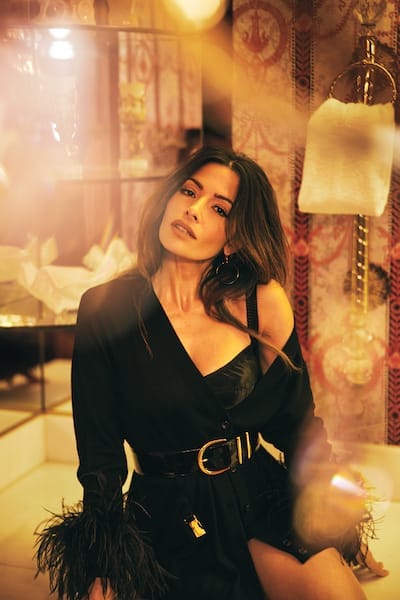 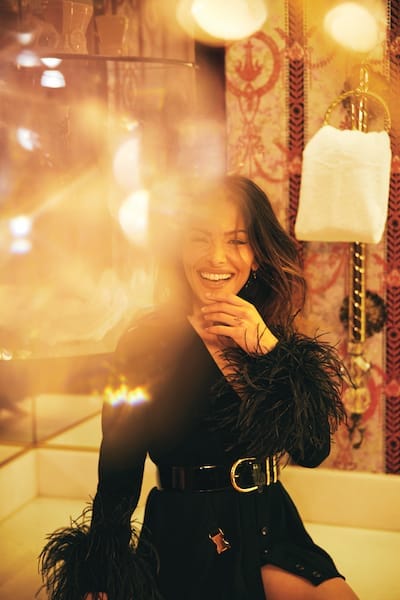 When it comes to her own style, Shahi similarly likes to keep it comfy — and kooky. “I’m a very mercurial dresser,” she says. “I’ve put together outfits that people can’t believe I’m walking around in, but I feel confident as long as I’m able to express myself.” Her favorite item in her wardrobe is a pair of Christmas pajamas featuring a pattern of beer-drinking, sunglass-wearing Santas. She’ll unashamedly wear them all year long. With cowboy boots. “They call it gas station fashion,” she jokes. “It looks like the majority of my clothes came from a gas station — and I like it that way.” 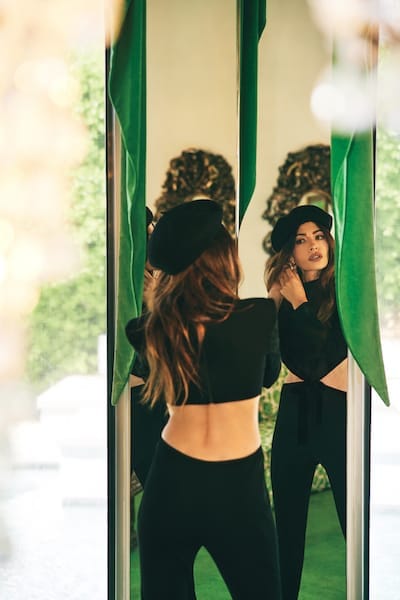 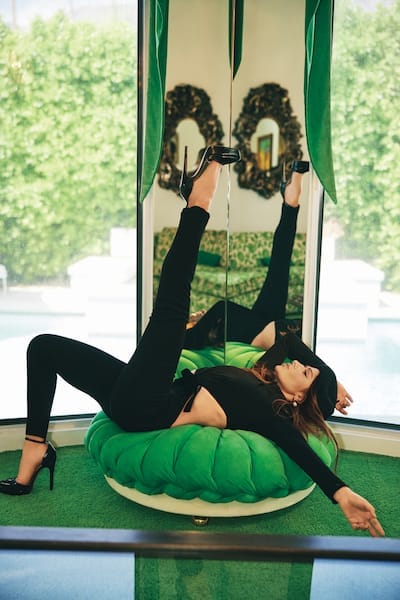 Now that she’s back in California, Shahi admits she isn’t feeling totally cozy in her personal life. Despite enjoying the biggest buzz of her career with Sex/Life and being on the precipice of superhero stardom with Black Adam, her future is hazy. While she definitely hopes to return to the desert for more cake and tequila, she’s not certain she wants to continue residing in L.A. after working outside the Golden State for most of the pandemic, missing her family in Texas, and falling in love with an Aussie.

“I’ve felt kind of displaced for a while,” she acknowledges. “I’ve felt like a man without a country. It’s been interesting. I do feel very unsettled physically, but I feel very settled with my heart. My heart is very full. My family is healthy. My children are happy. I’m happy. I have a great partner, so I’m very fulfilled in a lot of ways, but I do need to figure out where I’m going to land.”

• READ NEXT: Sydney Sweeney Gets Away From it All in Greater Palm Springs.