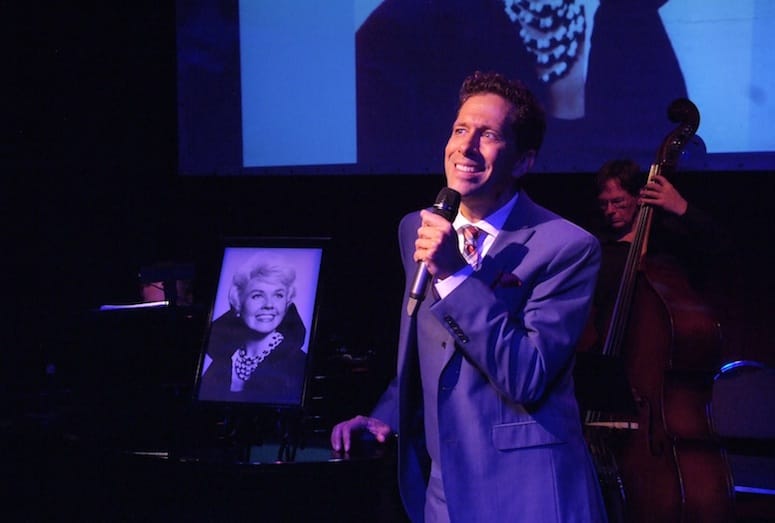 One of Scott Dreier’s favorite films is The Thrill of It All starring Doris Day and James Garner.

“There’s just something about it,” he says. “I love Doris Day in this movie because she makes me happy.” “My family is wonderful, but Doris Day felt normal to me,” Dreier says. “Because I had little exposure to pop culture, she resonated with me. She sang and danced and could become different characters while showing a version of herself. To me she was a mother figure, friend, sister…Doris Day encouraged me to become an actor.”

Dreier will pay tribute to the star in Doris and Me, June 19-21, at Coachella Valley Repertory in Rancho Mirage.

“I’ve had this obsession with her (Doris Day) since I was a kid, and I always wanted to write a show to celebrate what she means to me and her impact on my life,” Dreier says, “In the show I try to tell her history, her life, fun backstage stories, and interweave songs from her songbook. The thing I love about the show is it has it’s own Doris Day Happy Ending.“

Dreier, who is currently working on a CD, The Music of Doris Day, has made a living as a professional performer in theatre, TV, commercials, voiceover, film, recording, and cabaret.

• He’s won the DTL Award, 2006 Best Lead Male for Side by Side by Stephen Sondheim.

• He’s appeared on TV’s General Hospital, Malcolm in the Middle, and The Suite Life on Deck.

• His cabaret theater show, Doris and Me, is a winner of the 2013 and 2014 Eddon Best of LA Theater Award – Best Solo Show and Critic’s Pick in Broadwayworld.

While the real Doris Day has not seen the play, she is well aware of it, and Dreier has had the opportunity to meet his idol not once but twice. The first time he met her, he says he was young and so “star struck” that he wasn’t able to articulate what she meant to him.

At the legend’s 90th birthday benefit, Dreier was in attendance ready for his secret wish for a “redo” 20 years in the making. To find out what happened at this momentous occasion, see him tell it at the first of CV Rep’s Summer Cabaret Series.