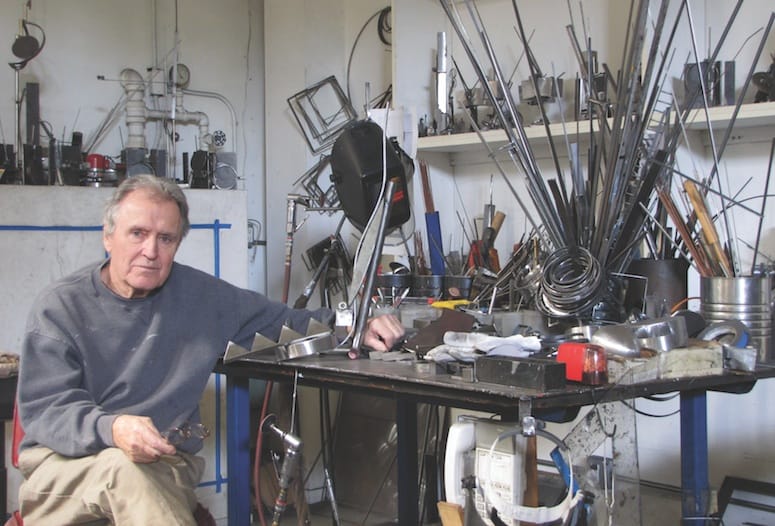 Spry and witty — he turns 84 at the end of this month — and one of the most collected, commissioned, and published artists in America, Benton has five monographs, four honorary doctorates, and a résumé boasting the Met, MOMA, Smithsonian, and Whitney museum collections. But he recounts with pride his first solo show at age 12 at a county fair near his hometown of Jackson, Ohio.

Benton is known for his geometry-based steel and bronze abstract sculptures, ranging from human-scale to towering monument. Though the artist is adamant about the non-objective nature of the work, insisting that the forms more or less “just resolve positive and negative spaces,” their language of circle and line, rhomboid, trapezoid, and sphere, arc, and angle inevitably evokes open doors, futuristic totems, and posed figures — and he is fine with that.

But it’s not really there in the image. What his compositions do frequently contain, some more explicitly than others, is evidence of the time back in Ohio when Benton made his living as a sign painter and became obsessed with reading between the lines.

Look,” he explains, “lettering is all about the negative space between the characters, and that became very important to me and stayed with me. More so than positive space, the negative really contains the summary of the form. When you ask how I get my ideas, it all comes from handling issues of positive and negative space that I learned in that job.” When he became a fine art painter — a discipline he still practices — those issues of spatial organization migrated to the canvas. But it wasn’t long before the trappings of two-dimensionality felt constricting, and he devised an approach to engaging both space and movement into works in the genre of kinetic sculpture. An important trend in mid century avant-garde boundary-blurring, Benton had his first show of those pieces in 1964 at Los Angeles’ Esther Robles Gallery. He became emblematic of the movement, but before a decade had passed, he was over it.

“Kinetic sculpture made my career,” he says, “but I had gone as far as I wanted to go with it. It was not satisfying to me.”

Switching to more conventional, stationary mediums, he nevertheless continued to take movement into account — designing work intended to be viewed from all angles. Series in this style include the Folded Squares, which feature the subseries Alphabets and Numericals, in a clear throwback to those early years in the sign-painter’s workshop.

Besides brief sojourns in Paris (1959) and New York City (1960), Benton has been living, working, and teaching in the Bay Area some 50 years now. Yet with his work for Austin Art Projects and especially Imago Galleries, his connections to the Palm Springs area are decades long as well. One theory about the area’s affinity for his work is a resonance with how positive and negative geometrical space plays against the desert landscape in midcentury architecture.

But the artist is clear that he does not “make work for any specific location or another. It’s not about anything other than the spatial relationships. Like elements in a happy marriage, it’s not an intellectual process. In a way, it’s about love. Finding what belongs together, that’s the way it is.”