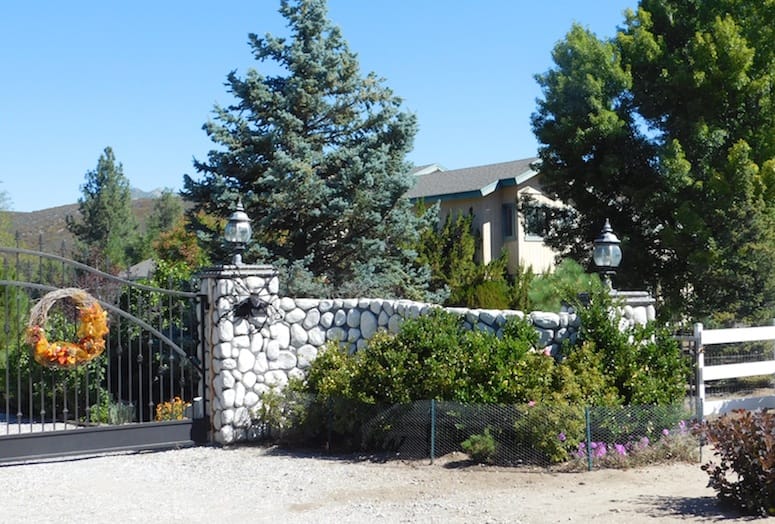 Although Doug Howard doesn’t own any horses, or even a dog, he bought a four-bedroom, five-acre home in Garner Valley because he liked the wide-open spaces. It’s also a short 35-minute drive to his architecture business in Palm Desert.

“I grew up in San Diego, but our family is originally from the Arkansas and Oklahoma border, so this feels like home,” he says.

This is only the third annual tour, says Judy Sherman, president of Garner Valley Gals, the nonprofit organization that hosts the event. Although there are more than 200 homes in the area, most residents decline due to privacy. The home tour is not held every year, consequently. The first was held in 2011 and the second in 2014.

Howard says he doesn’t mind opening his doors to a few hundred houseguests. “Home tours and open houses are where you get the best ideas,” he says.

“Most people don’t know that Garner Valley is a beautiful little community in the middle of Riverside County,” adds Sherman. “This tour gives us a chance to show off our community.”

Howard originally planned to build a home from the ground up in Pinyon Crest, but bought the “distressed” four-bedroom, three-and-a-half-bath home on Tool Box Spring Road because of a great price and its “good bones” for renovation. At the entryway of his home, during the tour, Howard plans to show before and after pictures on an easel.

“Many people have already seen my home because two of the former owners were very social,” Howard explains. “But I just want to show how I’ve updated this old house to look modern without moving any walls. 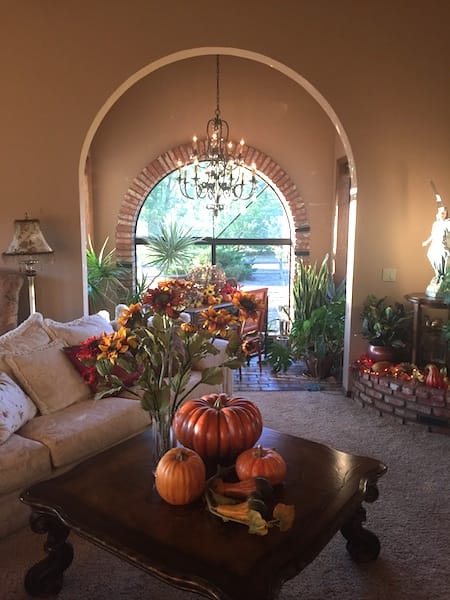 PHOTO COURTESY OF DOUG HOWARD
The Great Room at Doug Howard’s home has been updated with the original brickwork maintained.

“When I bought the place, there was dated wallpaper with green stripes and roses all the way up,” Howard says, gesturing to the vaulted ceilings in the living room.

He stripped off the paper, textured the walls, and added neutral paint and spot lighting. He also centralized the sound system. The green shag carpeting got replaced with stone floors and he completely renovated the kitchen, adding a large center island and three ovens.

“For Thanksgiving, there’s 30 of us,” Howard says, “and my sisters are happy to have an oven just to warm up the casseroles.”

Howard, who often does landscaping for his clients, made plenty of renovations to the outside of his property as well. He had to remove a wall of dead and dying cypress trees that were set up as a privacy border. “The good thing is that I can now see the views, and I’ve never had to buy firewood,” Howard says. 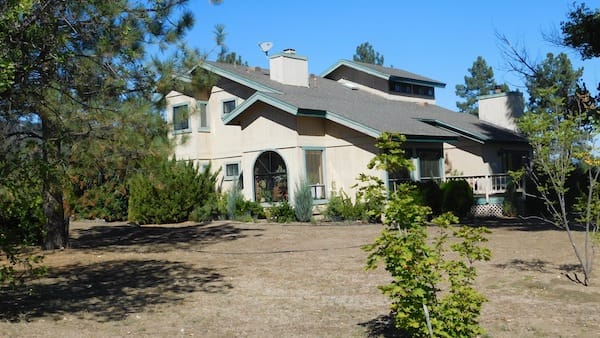 PHOTO BY MARCIA GAWECKI
The exterior of Doug Howard’s home in Garner Valley.

After finding out that watering his garden took nearly three hours, he laid out drip lines from large trees to small pots on his deck. To save the junipers, yuccas, and the rest of the cypress trees from gophers and ground squirrels, Howard dug down and put chicken-wire cages beneath them all. Then he added mulch, gravel, and rocks. For the home tour, Howard’s grounds are decorated for fall with scattered scarecrows, skeletons, flowers, and pumpkins.

He says his Garner Valley house is too large for one person, but he grew up in large houses. “I tell my friends that I have room to walk around my furniture,” he says.

The Garner Valley Home Tour, 10 a.m.–4 p.m. Oct. 14, features five homes and ranches in an equestrian setting in the San Jacinto Mountains, just 28 miles from Palm Desert. Tickets are $20 each and can be purchased the day of the event at the Garner Valley Commons, 61600 Devil’s Ladder Road. (Follow the signs to Pathfinder Ranch and turn right at the end of the road.)

Call 951-659-9894 for advanced tickets. Proceeds from ticket sales help fund donations to equestrian and animal shelters in the area. 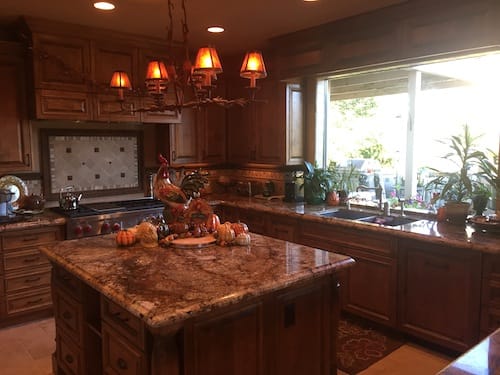 PHOTO COURTESY OF DOUG HOWARD
The kitchen at Doug Howard’s home has been completely redone, including cabinetry, lighting, new appliances, and countertops.