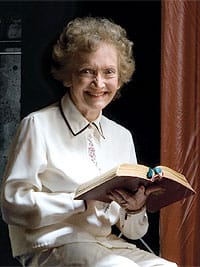 Annette Salvesen seeks someone to continue a project she has been working on since 1943, the year she knocked on Laurence Olivier’s door and asked him to sign her treasured volume of Shakespeare plays.

Salvesen has since collected another dozen autographs of those who have spoke the Bard of Avon’s words with an acting skill to equal the writing. She hopes her 1935 edition of The Collected Works of William Shakespeare finds its way back to England, where she grew up, and is displayed under glass. She has written a companion piece, 15 Trips to Shakespeare, that tells the stories behind each of the signatures she acquired (with two to go). Mostly, she sees it as a way to encourage young, would-be thespians to strive to be the best.

As a young girl in boarding school, Salvesen herself dreamed of a life on the stage, but her mother forbade it, citing World War II as a reason she should instead go to secretarial school.

“She didn’t realize she was putting me next to Laurence Olivier’s home,” Salvesen says, referring to the fact that the Triangle Secretarial College was evacuated to “the relative peace of the countryside.”

“I was a very plump little girl,” Salvesen recalls. “My mother said, ‘You have got to get thin if you want to wear pretty clothes. Go for a walk in the morning.’ So I walked past and up [Olivier’s] drive one morning.”

Even as a World War II coder and subsequently moving to the United States, Salvesen continued her passion for Shakespeare and the theater. In Palm Springs in 1970, she acquired her seventh signature: that of Richard Burton. Once again, she simply walked up to his front door and knocked.

One of her favorite encounters occurred in 1989 when she handed her book to an usher at the Doolittle Theatre in Hollywood and said she would be honored if Derek Jacobi would add his name. The usher returned with Jacobi’s request to meet Salvesen backstage after the play. She recalls their exchange:

“Olivier’s signature? Let me have a look at it,’ he replied. “I have got to sign it.”

“Neither of us had our glasses on,” Salvesen recalls. “We both had our noses to the book, and the fumes from his whiskey were around us like a friendly cloud.” In 1996, Salvesen not only scored the signature of Anthony Hopkins (pictured), but also enjoyed a private breakfast with him on a patio at the Miramar Sheraton Hotel in Santa Monica.

After securing the signature of John Gielgud, Salvesen consulted a book conservator at the Huntington Library in San Marino about having her book restored. The conservator said that would deplete the value of the book, but took it upon herself to custom-make a box to protect it. When Antiques Road Show made its appearance in Palm Springs in June, the appraiser valued Salvesen’s book at $4,000, noting that Olivier’s signature alone was worth $1,000.

Although she is looking for her 14th and 15th signature to complete “15 Trips to Shakespeare” (possibly Ian McKellen or Ian Holm), Salvesen has set her sights beyond that milestone.

“It would be so wonderful if after my demise someone would carry on,” she says, noting that she would sell it to someone “who is really interested in Shakespeare” or an appropriate organization.

She smiles wistfully at the thought.

“If only the very, very best of the Shakespeare people sign, in a hundred years time, can you imagine what it would be like then?”

Signatures in Annette Salvesen’s 1935 edition of The Complete Works of William Shakespeare:

Excerpted with permission from Annette Salvesen’s 15 Trips to Shakespeare

In 1943 the Triangle Secretarial College was evacuated to Gerards Cross and the relative peace of the countryside, far from the fury of Hitler’s bombs raining down on London. There I was installed as a plump teenager.

My mother forever warned me that if I did not diet I would never be able to wear the beautiful clothes for which I yearned, and without exercising seemingly morning, noon and night, I would never look attractive. She impressed upon me that early morning walks would do the trick. So, almost before the sun was up, I dragged myself out of bed, donned walking shoes and suitable attire, tiptoed along deserted passages, past closed doors behind which my fellow students slept in peace, crept down stairs that squeaked, on through the deserted hall and out through the heavy front door. Holding my breath — the door had a tendency to slam — I made my way onto the gravel drive leading to the road.

The air was crisp and fresh those early mornings as the sun rose. Mist hung about the hedgerows and country roads down which I walked at a “good brisk pace” — as instructed by my dear mama — past open gates leading to other country homes where people were folded in the comfort of sleep, happily oblivious to my crazy quest for a “decent figure.”

One gate was always open. The short, curving drive led to a pretty house that lay back from the road. It belonged to Laurence Olivier, who at that time was working on his masterpiece at Two City Studios: the movie of Shakespeare’s Henry V. How true it was I never knew, but rumors told of battles enacted on the golf course, much to the chagrin of disgruntled members of the local club!

Passing the house each day was a constant reminder of my ambition for a stage career despite my mother’s efforts to quash the idea. It still remained my ultimate goal to someday enter the world of the theatre. I slowed down as I reached the gate just on the off chance of catching a glimpse of the great man himself, perhaps rising early to go to the studio.

My idle daydreams of future aspirations helped break the monotony of the mundane, day-to-day routine of secretarial college, and it was then that I discovered a fellow student was in turn a friend of the famous couple: Laurence Olivier and Vivien Leigh. Knowing my passion for the theatre — she herself having perused my precious volume of Shakespeare — she offered me an introduction. This, of course, I eagerly accepted. So it did not come as a complete surprise when a plump, wide-eyed young lady strolled up the drive one early morning — book in hand, heart pounding with excitement and anticipation. Indeed, it was I who was surprised and thrown into complete confusion when the great man himself opened the door! I stood speechless for what seemed an eternity before offering a stumbled explanation, only to be drawn inside.

His friendly charm soon put me at ease, and I plucked up courage — though shyly — to explain my ambition to join the world of theatre. He seemed to understand a young girl’s longing to enter a profession so hopelessly out of reach and was impressed by my choice of literary reading material as I handed him the works of Shakespeare. Curious, he turned and placed my precious book on a table in the hall and carefully turned the flimsy pages. I saw him smile as picture after lovely picture came into view.

After a while, searching through the reproductions of colored plates, Laurence Olivier chose one and signed his name on the back of Cleopatra seated in her barge like a burnished throne from a painting by L. Alma-Tadema. When the ink was dry, he smiled and put the book into my outstretched hands. With a polite “thank you” and “goodbye,” I turned, little realizing I had just met what was to be one of the greatest in the world of theatre as the door closed behind me.

Embarrassed by the sound of my feet crunching their way back down the gravel drive on the otherwise soundless air, I pictured the laughing eyes of Vivien Leigh gazing through the paneled window overlooking the neat flower beds, at my disappearing figure on that early misty morn.

Turning right beside the grassy verge of the narrow country road, I returned to college walking on air, filled with overwhelming pride and delight. I gladly refrained from partaking of breakfast that day; indeed, I was far too excited to think of food, and could barely keep my attention focused on my class work. Olivier’s words kept running through my head: “Annette, take what you can get and then look around for what you want!” The secretarial course, however dreary, took on new meaning for me, especially when short notes of encouragement from the great man himself arrived in the mail.

This book became one of the main sources of relaxation. Pitman was banished to the far recessed of my mind, bookkeeping classes forgotten as the small print captured the imagination — lost in the adventures of Antony and Cleopatra. Whenever the page turned opposite Olivier’s name, pride of ownership swelled in my heart and took possession as I read on in peace, knowing that nothing and no one would ever take this treasure from me.