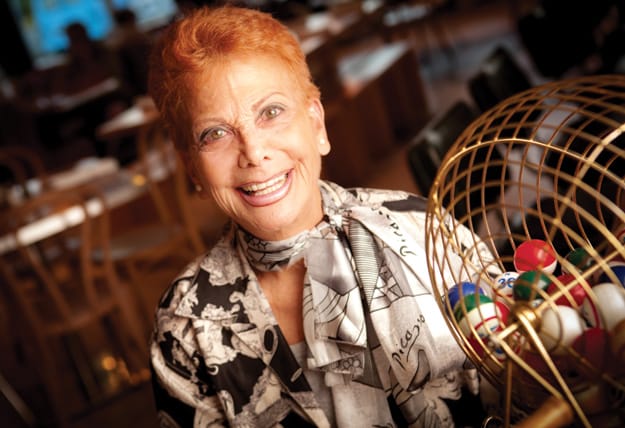 Peering through sunglasses that resemble two pineapples (they’re prescription), Linda Gerard greets and later surprises guests during Sissy Bingo at Ace Hotel & Swim Club’s King’s Highway restaurant in Palm Springs. She adds to her fan base every Monday night, when she picks numbers, breaks into song, and reveals memorable moments from a stage career that included starring in her most beloved Broadway musical on the day Barbra Streisand was unable to perform.

Did you imagine yourself in the role?
Opening night 1964, I was at the Winter Garden Theatre and saw Barbra do the show. I saw it with my husband, and I nudged him and said, “Jerry, I will be up on that stage performing that role some day.” He said, “Yeah, right. You’re a girl from Trenton, New Jersey, who sings in nightclubs.” I knew when I saw it that the part [Fannie Brice] was written for me. I had the same accompanist that Barbra and Lainie Kazan had, and he played for me at my audition.

At Sissy Bingo, do you flash back to the Winter Garden?
No, it’s so different. First of all, I’m in a restaurant and there is no spotlight on me. I wear street makeup and street clothes. I look around and I see young and old, fat and thin, gay and straight, and the first thing I sing is “Forget your troubles, come on get happy, you better chase all your cares away.” And people ask, “Is that the woman who sat us for bingo?” Some of them don’t know they’re coming for a musical night. So it’s fun to get them to like me; and toward the end, I will give them a glimpse into who I am. Sometimes at the beginning they ask, “Are you a professional singer?” And I nod my head.

Would you do anything differently?
Yes. Mimi Heinz [who eventually took over the role of Fanny Brice when Streisand left Funny Girl] asked me to go to Las Vegas with her and do the matinees and Sundays. And everybody who did that went on to be a major star. I said no and didn’t become a major star. But, in retrospect, I have a wonderful life and did things that they’ll never do and couldn’t have done. I’ve jumped out of a plane. I became a lesbian. And they ask, “You did what?” I did, I jumped out of a plane at 50.