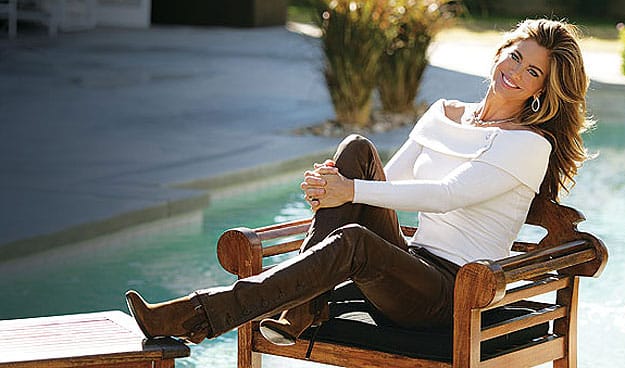 The aerobics instructor asked Kathy Ireland to leave and not come back because she was distracting the class. The distraction to which she referred related not to Ireland’s model looks and celebrity status, but rather to her lack of rhythm.

“If you saw Dancing With the Stars, I didn’t last too long,” Ireland says of her 2009 star turn on the TV show. “But I love a good challenge.”

So, aerobics instructor aside, she proceeded to make her own exercise videos, the first of which was filmed in the Coachella Valley. That’s hardly her only connection to the desert. Since 2005, she has owned a house in the Las Palmas neighborhood of Palm Springs. And, though her primary residence is in Santa Barbara, the headquarters of her kathy ireland Worldwide branding empire is in Rancho Mirage. Furthermore, the first photo shoot for her inaugural product was shot in the desert. “In many ways, our brand was born here,” she says.

These days, the brand encompasses everything from clothing, jewelry, wigs, and skin care to home and office furniture, rugs and carpeting, and home décor. Previously known primarily for more than a decade of gracing the cover and inside pages of Sports Illustrated’s annual swimsuit issue, Ireland could have come out with her own line of swimwear. But, she says, what would have been “too obvious.” Instead she chose the humble sock as her first product.

“I was OK as a model. I wasn’t all that great,” she says (though a plethora of media outlets has preceded her name with “supermodel”). “I knew my customer was far too savvy to buy something simply because it had my name on it. If she does, it’s because I have worked hard to gain her trust … If women embraced something as basic as a sock, that would tell us if we had the beginning of a brand.”

Ireland began modeling at the age of 17 and before long became recognizable to anyone scanning the magazine racks. In addition to Sports Illustrated, she appeared on the covers of Glamour, Cosmopolitan, and Harper’s Bazaar. But if you think she parlayed beauty and fame alone into a thriving enterprise, you’re mistaken.

“I started working when I was 4 years old, selling painted rocks from a wagon. They could be used as a paperweight, objet d’art, or for self-defense,” Ireland says, exhibiting the kind of entrepreneurial thinking that leads to success. At age 11, she had a paper route. “I had people yell at me, ‘It’s a boy’s job!’ But each year, I won carrier of the year for my district,” she says.

“Modeling exposed me to the best designers and people of all different cultures, but I always knew I belonged on the other side of the camera. When I modeled, I saved my money. A lot of people thought I was cheap. I was saving to invest in people.”

Ireland constantly refers to the team she has built and uses the word “we” more than the word “I” when discussing her company.

“We have been together 20 years, so we know where we can support one another,” she says. “Our team is helping me to be very efficient with time. … The brand appears in my name, but it’s the result of thousands and thousands of hours of work performed by many people.”

The company employees about 40 “team members.” On a typical day, a dozen of them work in the Rancho Mirage office.

“I don’t have a formal degree in design,” Ireland says, “but we have team members with a master’s in fine arts.” Nevertheless, she sketches and takes photographs of objects and patterns that serve as inspiration. “I get involved every step of the way,” she says. “Sometimes it’s a concept; sometimes it’s a photograph or sketch. Sometimes it’s extremely creative; and other times it’s pretty precise.”

She had to be persuaded to use her name for her corporate identity, but she separates her personal self from the brand by lowercasing the “k” and “i.”

“I don’t get confused and think that’s my name, because it’s a team effort,” she explains.

As often as she talks about her team, however, she also talks about her customer, always as “she,” since her focus — and, indeed, her company’s trademarked tag line — is “finding solutions for families, especially busy moms.”

“She’s the most critical part of our design team,” Ireland says. When Ireland has been asked, because of her celebrity, whether she needs security detail, she replies, “What — from the mom who’s going to ask me, ‘I bought a rug; what lamp will go with it?’”

Ireland expresses no qualms about mentioning she was kicked out of aerobics for a lack of rhythm or admitting that, while she loves sports, she is “not very good” at golf or surfing. “One of these days, I am going to get good at golf, but it’s not today,” she says. Her foray into surfing came after her husband gave her a surfboard on their first anniversary. “I go out and try not to run anybody over,” she says. “And when I don’t, it’s a good day.”

As open as she is personally, Ireland guards information like corporate profits. “One of the beauties of being a private company is not having to reveal income,” she says. “We were able to quietly operate under the radar for quite a while. Forbes [in 2006] outed our brand as a billion-dollar business.” In its Feb. 27, 2012, cover story, Forbes refers to her as a “$350 million mogul” with $2 billion in retail sales.

In addition to running her branding empire, Ireland writes books (Solutions for Busy Moms: Your Guide to Success and Sanity and Powerful Inspirations: Eight Lessons That Will Change Your Life) and is a motivational speaker.

“Speaking publicly is something I never thought I would have done,” she says. “Critics said I had a voice that could kill small animals. I had to decide if I would let the cruelty of the comment silence me.” She didn’t, of course. “When people don’t like our ideas, it’s OK. I will come back tomorrow. Criticism is a gift, though maybe in a nasty package.

“I think we all prejudge people a little bit. We put people in boxes,” she continues. “I don’t fit in anyone’s box.”

Among her most recent product launches are bridal gowns, intimates, nursery furniture, and quick-to-assemble office furniture (“Not cutting edge,” she says.  “We have to be on trend, but not avant-garde. It has to make her day better.”)

Ireland refrains from putting her name on anything that would conflict with her family-solutions mission statement. “You are not going to see kathy ireland handguns,” she says. In fact, she goes further regarding the integrity of her brand.

“I don’t put my name on anything,” she says. “I give my heart to everything.”

After meeting Kathy Ireland through mutual friends 20 years ago, Andre Carthen agreed to appear — with Ireland’s mother — as a student in her fitness videos. Now the Cathedral City resident is the design ambassador for kathy ireland Worldwide — providing cooking and entertaining solutions for families and “especially for busy moms.”

“It was through Kathy that I met Janet,” Carthen says. “It was a dream come true. … She was working on her nutrition program and Kathy said, ‘What about Chef Andre?’” Working with Jackson’s personal trainer, Carthen not only provided recipes for the pop star’s recent book, True You, but also for fitting into her tour schedule. He also is working as chef consultant on the Chef’s Council of Nutrisystem in conjunction with Jackson’s role as spokeswoman for the weight-loss program.

In addition to supplying cooking and entertainment content for the company’s solutions-oriented website, Carthen collaborates with Ireland on products, including candles that smell like food, such as oatmeal raisin cookie and pecan pie, and they are introducing cookware and kitchen knives. As for edible food products, Carthen says, “It’s all in the works.”

People in Her Life

Kathy Ireland spends much time surrounded by a team of business colleagues and meeting with partners in the kathy ireland brand. In November, she launched her bridal gowns collection at Desert Bride in Indio. In addition to helping narrate the runway show, she spent time greeting guests and posing with guests and models for pictures. That same day, she stopped to visit stores carrying her products: D&D Carpet in Cathedral City and Lamps Plus in Rancho Mirage.

Ireland also has favorite recreational spots in Palm Springs (Koffi, El Mirasol, and Le Vallauris) and likes hiking and biking near her home. In addition to residences in Santa Barbara and Palm Springs house, she owns two houses in Honolulu and one in West Hollywood. All except her main house can be rented for weddings or vacations through www.oasisworldestates.com. In each is hung Andy Warhol’s portrait of Elizabeth Taylor.

“She is my hero,” says Ireland, who was close friends with the actress before her death in March 2011. “In the early ’80s, when the AIDS epidemic was on the horizon, she was so angry that nothing was being done. Her friends hung up on her when she asked them to get involved. Her people pleaded for her to leave it alone. But she was so brave. She was never about being popular or doing what was popular. She just moved forward.”

Taylor also served as a mentor. “She was always encouraging me to go bolder [in design],” Ireland says.

Family obviously takes front and center for Ireland. She and her husband, Greg Olsen (an emergency room physician and commercial lobster fisherman), have three children: Erik, 17; Lily, 13; and Chloe, 9.

“I am encouraging each of them to figure out their path, their gifts, and to develop those gifts; and my hope is to be supportive no matter what it is. They have all expressed interest in design and photography, and they are all musical. Erik is thinking about going into the ministry. Lily is really creative; her art teacher is bringing out the artist in her. Chloe, I think she’d like to run the world; she has lots of passions.”