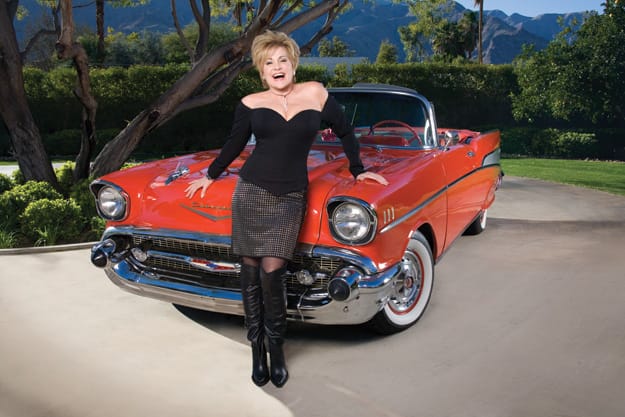 After 17 years crisscrossing the ocean between jobs and houses in London and Los Angeles, Lorna Luft relaxes in the warmth of the desert.

“This is paradise, says the multitalented daughter of singing legend Judy Garland and producer Sidney Luft. “And I mean ‘Paradise’ with a capital P.”

Luft and her husband of 17 years, musician and musical director Colin R. Freeman, have leased a house in Rancho Mirage and have been preparing for a tribute to her mother this month at McCallum Theatre in Palm Desert. On a sunny day in January (as most of the country bundled up to keep warm in record-cold temperatures), she changes from one designer outfit into another during a photo shoot at Frank Sinatra’s Twin Palms house in Palm Springs. The location is apropos.

“Frank Sinatra was my godfather,” Luft says. “When I was a child, I thought he went to everybody’s house.”

Despite the glamour, the fun, and an extremely successful career of her own, Luft has remained relatively unaffected by fame.

“I think when you have incredibly famous parents, you have to realize that just because you are the son or daughter of someone well known, you have to keep your feet on the ground,” she says. While other celebrities seek the privacy of exclusive estates, Luft and Freeman live in a gated community built around a park.

“I’ve met new people; there is a great sense of community,” Luft says. “I love the park. I tell my Dalmatians, ‘Let’s go! Let’s take a walk in the park!’”

Before settling in Rancho Mirage, Luft and Freeman divided their time between the United Kingdom and Los Angeles.

“I moved to England when I was 8,” she recalls. “I went to school there and in later years starred in a series of plays and musicals in London. I met my husband while we were on tour with Hollywood — Broadway. … Colin was musical director. I was coming out of a marriage, and he was coming out of a relationship. I truly believe that if something is meant to be, it will be.”

Every year, they spent part of their time in Beverly Hills; but the environment had changed.

“It wasn’t the L.A. or Beverly Hills that I had known as a child,” Luft says. “I felt depressed. My husband said, ‘We don’t have to live here.’ We looked at each other and said, ‘What are we doing here?’” That is when they came to the desert to visit pal Barry Manilow and discovered their new home in Rancho Mirage. “When I come back to the house now, instead of being over-anxious and depressed, I never want to leave,” she says. However, she adds, “I will always think of London as a second home.”

Manilow and Luft have been friends since 1972 when she went to see Bette Midler perform at a small nightclub in New York. “Barry was at the piano, and I thought he was terrific. We were all just starting out, and we have been friends ever since.” Manilow and Freeman produced Luft’s CD based on her concert, Songs My Mother Taught Me, in 2007. “No one knows music more than Barry,” Luft says. “Barry is like my brother. We’ve been friends so long. He is as close to me as my family. He is one of the most generous and giving human beings I have known.”

Luft has been a shining star in every phase of show business. At 11, she made her singing debut on her mother’s television program, The Judy Garland Show, and at 16 shared the bill with her mom at the legendary Palace Theatre in New York for one month.

Despite starring on Broadway and in London’s West End, performing in concert halls and theaters around the world, acting in films and on television, appearing on major talk shows and variety programs (including a dynamic duet with sister Liza Minnelli on the 2007 Tony Awards), her greatest achievement and honor came when her critically acclaimed memoir, Me and My Shadows: A Family Memoir, was made into a four-part television miniseries starring Judy Davis as Garland. Luft was co-executive producer of the series, which won five Emmys and ranked as the most watched television miniseries of 2001.

“Producing is very difficult,” she says. “It means raising money and asking people to let go of their money. It means getting people to see your vision. Life With Judy Garland: Me and My Shadows was hard for me. I was so close to it. It was personal to me and an incredible struggle to get made.” She pauses and then adds softly, “It was a joy the way it was received, not only by the public, but the critical awards. If I ever produce anything else for television, it would have to be something I was passionate about.”

Luft recently closed her holiday tour in the musical White Christmas. She created the stage role in London and re-created it in the United States over the holidays for the past two years. Her tour ended in January, and she is delighted that she can stay home for her next performance.

Songs My Mother Taught Me melds one of the most familiar songbooks with the personal memories of a loving daughter. Variety calls it “a rousing, dramatically riveting musical event.” The Los Angeles Times calls her performance “heart-stopping and thrilling … an incandescent revelation not to be missed.” The show was awarded two Los Angeles Theatre Alliance Awards.

“I come from a tradition of backyard musicals — you know, the Judy Garland/Mickey Rooney musicals where they would put on a musical in someone’s back yard. I always wanted to do one.” She pauses. “The McCallum isn’t exactly a back yard; but because I live here now, and so close to the theater, I feel like it is in my back yard!”

Performing on stage was not so simple when her two children were young. “When I was doing the national tour of Guys and Dolls, it was tough,” she says. “They would fly to meet me when school was out. We’d meet all over America. Finally, my son said, ‘Don’t do that,’ and I didn’t tour again until they were grown.”

Luft is close to her children: Jesse, 25, and Vanessa, 19. Neither is following their mom, grandma, or Aunt Liza into show business. “My son is a stockbroker,” Luft says. “Someone has to know about money in this family.”

Still in school, Vanessa is considering a career in culinary arts. She comes by her interest in food naturally.

“My husband is one of the greatest cooks ever!” Luft exclaims. “It is his hobby. He’s a musician and so creative. He is amazing!”

The family gathered in Rancho Mirage on Jan. 11 to enjoy a belated Christmas and New Year’s. “On Christmas, I was on the road traveling,” Luft explains. “So the kids said, ‘Let’s wait and celebrate the holidays together after you get home.’”

Some of the stories about her and her sister amuse her. “Liza and I talk on the phone,” she says. “She lives on the East Coast, and I live on the West Coast. But we talk, and she sends me flowers on my birthday. Because we are who we are, it is just different. It gets into the paper. It sort of makes me laugh.”

Growing up in a famous family, Luft learned one lesson that she tries to share with industry newcomers: “Stay away from ‘moth people.’ You have to be incredibly careful of ‘moth people’ who are attracted to fame just as a moth is attracted by light. They say they are only interested in you, but they are not. I have seen this so often, and I want to say to people starting their careers, ‘Be careful.’ She pauses and then adds, “One thing I have learned: You drive the bus. You are in control. You can let on who you want.”

Luft says the most important lesson she learned from her mother was this: “Give back. Never be a taker. I have instilled that in my children. I tell them, ‘Don’t wait for the holidays to do something for someone else. If you give back, you can go to bed happy at night.’”

LORNA LUFT
‘Songs My Mother Taught Me — A Celebration of the Music of Judy Garland’
March 26 at McCallum Theatre
1-760-340-2787
www.mccallumtheatre.com