Sarah Hunley may not have been present to hear the raucous laughter coming from the Camelot Theatre March 10 during the premiere of A Very Sordid Wedding in Palm Springs, but the late actress made her final curtain call her funniest.

Hunley, who passed away in October 2016 in Los Angeles, brought the character of Juanita Bartlett to the original Sordid Lives in 2000.

“I was worried she would not get to do (the sequel),” Director/creator Del Shores said. “I am so glad we got to memorialize this amazing human being.”

In A Very Sordid Wedding, Hunley had many scene-stealing moments that caused her to pause one day durign the film’s production and tell Shores, “Lord, had I known I had been working with Del all these years and he would just feed me lines, I could have saved a fortune on acting school,” Shores recalled.

The film is slated to screen through March 26 at Camelot Theatres before moving to other cities.

Hunley’s antics were not relegated to just on screen. Producer Emerson Collins, who also had a role in the film, recalled in a post screening Q&A before a packed house that Hunley took extra measures to ensure she would not misplace her passport for the 12 days of shooting in Winnipeg, Canada.

“Four days later, she came to us and said she could not remember where that very safe place was,” Collins said. “At the end of production, one of our crew drivers had to drive Sarah with a copy of her passport to the border in North Dakota to get her across to an airport so that we could get her home. The very next morning the cleaning crew found the passport.”

Three assistants and both Shores and Collins had gone through her room to try and find the passport after she initially lost it. The maids discovered it tucked it into the end of her bed in a Clinique bag.

“So I called her and told her they had found her passport,” Collins said. “She said, ‘So where was it?’ And when I told her, she said, ‘Oh, I remember that now.” 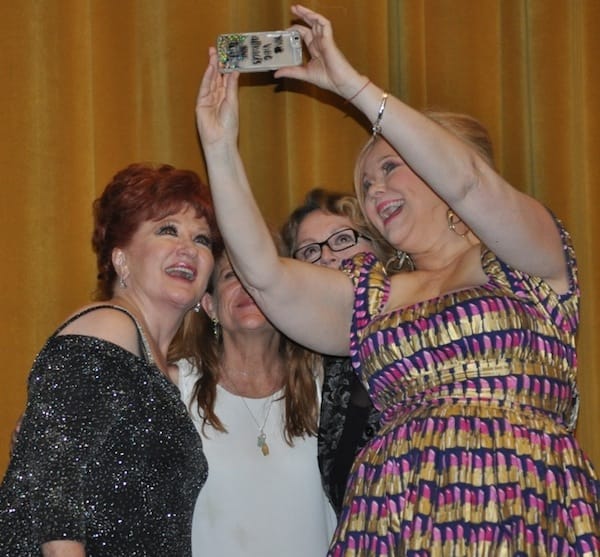 PHOTO BY JIM POWERS
Caroline Rhea uses her phone to take a group shot with (from left) Ann Walker, Dale Dickey, and Bonnie Bedelia during the post Q&A at Camelot Theatres.

Shores added three days later, Hunley called him and said, “Del, you have got to call the maids in Winnipeg, I remember where I put my passport.” Shores responded, “I told you where you put your passport!”

Shores doesn’t expect to revisit another version of Sordid Lives again. “I feel like this is it,” he told the audience. “I feel it was a good completion to these characters. I love them dearly, but this is the last incarnation.”