Sowing Seeds: TV on the Radio Debuts New Album in the Desert 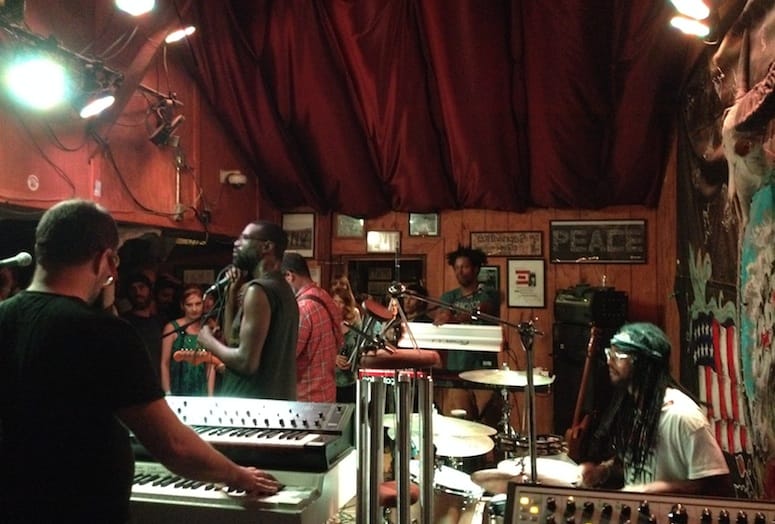 As I was driving to Yucca Valley on the evening of Oct. 24, I was filled with excitement and anticipation — I mentally went through all of the songs that TV on the Radio might have performed later on at Pappy and Harriet’s. In fact, despite TVOTR being one of my favorite bands, I had never seen them live, and I was extremely happy to catch them in an intimate setting, such as Pappy’s outdoor area.

Once I parked and walked towards the venue, I noticed that there was no equipment on stage, no people, no merchandise booth, no bouncers and I panicked, wondering if the show was just a cruel hoax. I kept walking through Pappy’s back patio and made my way towards the restaurant where all my worries faded away: The whole show was going to take place inside. I breathed a sigh of relief but I still wondered how the restaurant could accommodate all of the people that flocked to the high desert to see this Brooklyn-based band.

This thought dissolved the minute the opening act, Natasha Kmeto, started her trance-inducing set filled with trip-hop and R&B tunes. She charmed the crowd with her sultry, powerful voice and infectious dance sounds that she played on her keyboard and laptop computer. Everyone had the space to dance and to admire this one-woman show.

However, when TVOTR took the stage it was a riot! The whole place got packed really quickly and I found myself struggling to reach the front, but once I did, I was basically on stage, a few inches away from the trombone player. And boy, what a show!

The band dove into the songs from the new album, Seeds, coming out next month. Happy Idiot, Careful You, and the classics Wolf Like Me and Young Liars were big crowd-pleasers, but the whole set from beginning to end was an energetic blend of indie rock, a melodic wall of sound defined by post-punk and even R&B moments.

After the show, I had the chance to speak with singer Tunde Adebimpe and guitarist Kyp Malone — they are genuinely nice guys and shared how much they like the desert. They were interested in knowing more about the “desert sessions” at the legendary Rancho de la Luna recording studio. I have never been there but I suggested they should go, because great, magical things always happen in the desert!