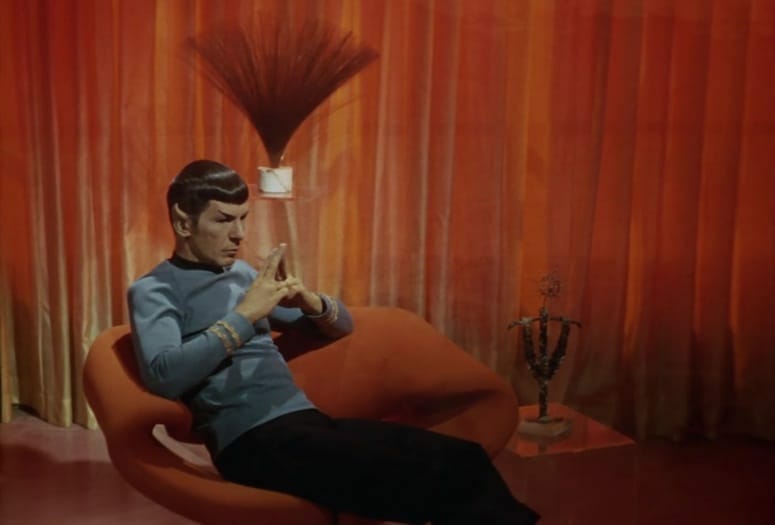 Dr. Spock, played by Leonard Nimoy in the TV series, Star Trek, sits in a Ribbon Chair designed by Pierre Paulin — one example of the midcentury décor used in the '60s show.
PHOTOGRAPH COURTESY VIACOMCBS

Even before the pandemic, Dan Chavkin engaged in what a lot of us do now — he binge-watched shows on a streaming service.

But unlike the rest of us, his led to co-authoring a book, Star Trek: Designing the Final Frontier, that he and Brian McGuire will speak about during a Modernism Week program on Feb. 20. Their chat is sold out, but they will be available for questions when they sign copies of their book after their 10 a.m. chat at the Hyatt Regency Palm Springs, and again at noon the same day at The Shops at Thirteen Forty-Five - also in Palm Springs.

Chavkin, who has niched a career photographing midcentury houses in Greater Palm Springs, noticed the Star Trek series available on Hulu. He had no agenda when he set out to watch the original Star Trek show, which aired for only three seasons from 1966-69.

“I had never seen the entire show before, all three seasons, so why not watch it now when it's available?” Chavkin says. “So I began watching and I almost immediately noticed placement of not just generic midcentury furniture, but midcentury modern furniture by known names, by designers. The light bulb sort of went on and since I was going to watch the show anyway, if I see anything else while I'm watching it, I'll just screen-grab it and then just sort of go from there, and by the time I finished watching all three seasons, about 75 episodes, I had amassed a pretty decent and impressive collection of midcentury modern furniture.”

Well after Star Trek went off the air and came back in other iterations, it’s the original shows that led to Star Trek conventions, extended the careers of actors William Shatner, Leonard Nimoy et al, and drew a whole army of Trekkies. However, no one had ever touched the furniture angle.

Chavkin knew if the book was going to have legs, he needed someone with knowledge of the shows to complement his midcentury acumen. He and McGuire had actually met by chance when Chavkin was knocking on doors of cool midcentury houses asking if he could photograph them. In 2006, McGuire owned one of the all-steel houses designed by the late Donald Wexler.

“Brian is just an absolute diehard Trekkie,” Dan says. “And, I'm not. Again, I didn't come at it as a Trekkie. I just came at it as someone who is passionate about midcentury modern, modern architecture and design, and furniture. That's my background. And so I thought, "Well, in order to successfully complete this project, I really need someone who can offer that appropriate insight into the project."

The co-authors chat further with Palm Springs Life about the book, the challenges in getting permission from CBS, and how midcentury modern pieces wound up on the set of a TV space show. 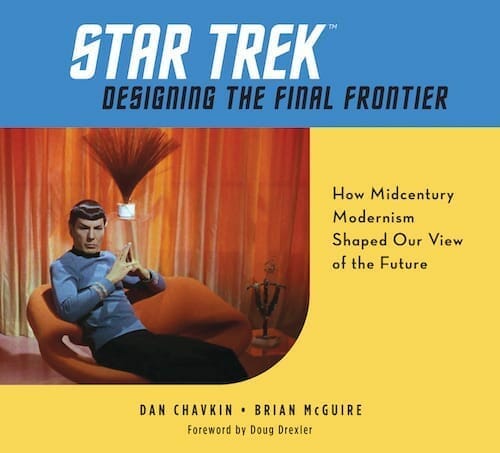 What was your biggest stumbling block in getting the book idea off the ground?

And that sort of put the project to rest. So it laid dormant for several years until I finally, through a friend who had met someone at a party who knew someone at CBS, I was able to contact the right person. I pitched it to her and she loved the idea, and she said, "On your behalf, can I pitch it to some of the publishers that CBS works with?" And I said, "Yeah, of course." That’s when the book found its home to our publisher.

Brian, had you made a connection between Star Trek and midcentury design prior to Dan coming to you with the idea?

I’m old enough to have grown up with Star Trek. I watched the original series back in the ‘60s. At that time I knew nothing about midcentury design and furnishings. It took Dan's very keen eye when he was doing his binge watching to pull all that stuff out. So I probably would've missed it all together.

What research did you conduct for the book?

Dan: I think that the first bit of research involved my locating any living creative on the show, specifically the prop department, and I was fortunately able to locate, contact, and then eventually visit the original prop master on the show. His name is John Dwyer and he got involved in the second season in 1968 and finished the rest of the show until its completion in '69.

By then I had already identified what the pieces were on the show that I knew I wanted to showcase in the book. And so then it was just a matter of finding examples of that piece, so that, like it is in the book, you have an isolated photograph of the piece itself, and then you have the still from the show to support it. So basically I dealt with dealers from around the world who are largely on an online marketplace called 1stDibs. And fortunately I was able to find most of the examples through these dealers and they were gracious and kind enough to allow me to use their photographs of these pieces.

Did Dwyer make any mention as to why they picked midcentury for the set?

Dan: It wasn't planned out to the extent that anyone would say, or the art director, Matt Jefferies, would say, "Well, I'd like this tulip chair." It wasn't like that at all. It was just a matter of probably John Dwyer reading the script and also probably looking at Jefferies' set designs, which we have a lot of in the book, and then just basically visiting various stores throughout Los Angeles, contemporary stores, stores that specialized in contemporary furniture, because at the time, you know, it wasn't called midcentury modern furniture. And furniture that felt futuristic and would be the right fit for the show.

What function does the midcentury furniture and décor play in the show?

Brian: In the introduction to the book we remark that the objects almost function as guest stars in the episodes. How they articulate with the characters and advance the plot and provide context and texture to the alien cultures that are being represented. So it's significant what they contribute to the storyline and to the atmosphere.

Dan: I think with the inclusion of these pieces by known designers, it really elevated the look of the show. The show was on a very small, tight budget, and without being too disparaging, the sets, the overall sets would sort of reflect that budget. They weren't totally high-end, high-tech, highly polished, expensive looking sets, but with the inclusion of these pieces, it really elevated the whole look and feel of the set design of the show.

Did you find any surprises in your research?

And, by the way, there are examples of pieces that are not attributed to any particular designer. They are generic contemporary furniture and we make note of that as well. But if it had just been all no-name pieces, I don't think that would have been substantial enough for a book. But the fact that you have this great fraternity of designers who are both domestic and foreign designers is pretty special.

Why has Star Trek remained so relevant that a book like this can be produced 50+ years later and still resonate with audiences.

Brian: I think people latch onto it for different reasons. Some people because of the themes about our culture and diversity and living in harmony with each other. Some of them just due to the science fiction aspect. I was drawn to the chemistry of the characters. How they interacted, how they spoke with one another, how they argued and I just thought it would be so cool to live and work in the midst of such interesting people. And so for me the attraction was just the chemistry of the main players.