Start the Music! Light the Lights! 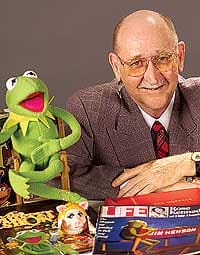 When The Muppet Show made its television debut in 1976, the global wave of laughter changed family programming forever. It also made household names of those wonderful cloth and foam rubber characters — Kermit the Frog, Miss Piggy, Gonzo, and Fozzie Bear. I was fortunate to have been a part of those wonderful years — especially knowing and working with the Muppet master himself, Jim Henson.

Memories of the fun times in the mid-1970s became clear last February, when Henson’s five adult children sold the Muppets to Walt Disney Co. (Jim had been gunning for a similar deal with Disney when he died in 1990.)

I WAS WORKING IN MANHATTAN as a production administrator for ABC-TV in 1973. One morning, I was invited to a meeting in at the network’s headquarters on Sixth Avenue to meet Jim Henson of Sesame Street. ABC had signed Jim to do a Valentine’s Day special that was actually a “backdoor pilot” for a half-hour Muppet series. This was daring at the time — a family-oriented show with puppets in prime time.

I had heard of Jim, having seen Muppet clips on the famous PBS children’s series, but I had not seen him in person or on television. He was always behind the scenes as Kermit the Frog or other characters that he personally performed were “on camera.”

I quickly found out why.

Into the meeting walked a tall (6-foot-3-inch), thin man, 38 years old, with long brown hair and a gray beard. He wore leather trousers and what looked like a handmade tan frontier shirt, a leather brim hat, and a leather strap attached to a small pouch draped over one shoulder. With a shy smile and clear blue eyes, he extended his long arm to say hello to each person at the table.

He spoke little during the meeting, but listened carefully without writing a single note on the yellow pad provided to him (although he doodled continuously). When he finally spoke, it was with a quiet, clear voice.

“Folks,” he began, “I just want things simple, but they have to be right for the characters and Mia.” (Actress Mia Farrow was to be the only human guest star.) He continued to explain what he needed to produce: A Muppet Valentine Special.

“We need a stage with a cyc [cyclorama for an infinity background], and the characters will require lots of light. They come alive in light and movement. All of the Muppets are real, you know.” He wasn’t kidding.

He was a shy man who avoided being the center of attention, which made him even more fascinating to observe.

With a host of newly created Muppets to carry the show with Mia, there would be lots of music, skits, and wildly wonderful Muppet humor. And Kermit was not to be included.

We discussed all the elements of the script — music by Sesame Street composer Joe Raposa, studio size, sets, shooting dates, and delivery of the show for broadcast on Valentine’s Day 1975. Jim was to direct as well as perform several characters with his puppeteers. The puppeteers included Frank Oz (now a director), Jerry Nelson, Richard Hunt, Dave Goelz, and actress Fran Brill.

I scheduled a follow-up meeting a week later at the Henson offices at 227 E. 67th Street — on the top two floors of a turn-of-the-century carriage house. On his own turf, Jim was more talkative and playful with his staff of 12, not counting the freelance puppeteers; he had created a most friendly, warm, creative atmosphere. Muppet photos, props, a couple of Emmy Awards for Sesame Street, and framed record album covers filled the offices. There was also a 1965 Academy Award nomination certificate for Timepiece, a short film Jim had produced and directed.

Later, we walked down the street to the Muppet workshop located on two floors of loft-type space off Lexington Avenue. If the business office was the creative engine of this operation, “the shop” was where all the ideas came alive.

The more I worked with Jim on the show, the more I liked him. He had clear ideas and solutions to production problems. He knew how each puppet and its human co-stars should be photographed, and he also knew how to keep an eye on the budget.

The show was produced without a hitch. Mia Farrow sang and performed with the different characters, and Jim made sure she always looked great without revealing to the audience that she was pregnant.

The ratings showed that a large family audience was there, and the word from “upstairs” was that ABC had decided against ordering a series. However, the network did order a second special. There was still hope.

AS THE HENSON organization prepared the second TV special, Jim’s co-producer left the team. I nervously called Jim and asked if he would consider me as his associate producer. He was surprised that I was interested in leaving ABC and suggested we discuss it over lunch.

Jim ultimately asked me to join his team. He said I did not have to worry about the second pilot succeeding. “Why would ABC spend so much money on two pilots if they were not going to finally give The Muppet Show a time slot?” he said.

I agreed. Jim finished his lunch and ordered a slice of apple pie — his favorite dessert, and mine.

Weeks flew by as I worked with Jim on the new ABC special, The Muppet Show: Sex and Violence. Robert Burns wrote, “The best laid plans of mice and men often go astray.” Well, it was not to be. The ratings were low again, and ABC passed on the series.

Jim brought his staff together and said, “Don’t worry. This one got away, but the next opportunity won’t. Let’s keep moving forward.”

Meanwhile, Jim’s agent, Bernie Brillstein, pitched the idea to NBC and CBS. Both passed, while the Muppet staff continued with Sesame Street and skits for NBC’s upstart Saturday Night Live in 1975.

Finally, the Muppets’ break came after Bernie talked the largest CBS-owned-and-operated stations — New York, Los Angeles, Chicago — into ordering a half-hour Muppet series for a prime-time slot once a week without the series being a network show.

Bernie then talked British producer Sir Lew Grade into funding the show. A very wise Sir Lew Grade insisted that the series have Kermit the Frog as the host, and the show was to be shot at his Elstree Studios, just outside of London.

We were suddenly in the syndication business!

I learned later that Jim had dreamed up Kermit while in high school in Hyattsville, Md., and made Kermit out of one of his mother’s old green felt coats. Jim added half ping-pong balls for eyes, and a star was born.

Miss Piggy was a minor character at the beginning but took center stage within the first few weeks of the series, whether anyone liked it or not. Jim (Kermit) and Frank Oz (Miss Piggy) were solid gold together, repeating their Bert and Ernie success.

The Muppet Show premiered on Sept. 20, 1976, at 7:30 p.m. Early on, it struggled with low ratings and booking guest stars. Jim’s friend Rita Moreno was the first guest star, and she won an Emmy Award for the performance.

By the second season, the series was breaking syndication records and broadcasting in more than 100 countries. And it won several Emmy Awards

By early 1979, the company moved to  larger headquarters and hired Warren Hansen, a young and innovative interior designer. The result was spectacular: lots of color and light, and a huge skylight over the first floor puppet workshop. I tipped Sherman Emery, editor of Interior Design, an upscale magazine for business interiors, and he ran a cover story on the design in February 1980.

I stayed with the Muppets for six years, through the five seasons of the original series and the first feature film, The Muppet Movie. I moved to Los Angeles as the company ballooned to 112 employees in offices and “creature shops” in New York and London.

When the tragic news that Jim had died from pneumonia on May 16, 1990, I had the flu and was unable to fly to New York. I had to watch the services on television.

During my Muppet years, Jim came to work regardless of how he felt. It was obvious that in the final weeks of his life (at age 53), he must have continued to work and probably waited too late to seek medical attention.

Jim Henson was the closest to a genius of anyone I have known. He was a tireless, creative person who gave constantly of himself to his family, staff, friends, and his art. And he did that always without ever raising his voice. He always spoke politely, with a warm smile. This made all of us who worked for him work twice as hard; we wanted his approval. To this day I think of him often, but never more than when I have a piece of good ol’ American apple pie.