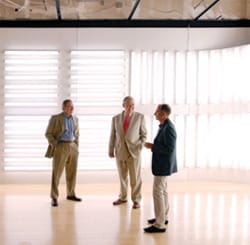 Our annual Progress Issue typically bursts with colorful pictures and renderings of exciting new commercial ventures jutting into all corners of the Coachella Valley — and celebrates the bright minds behind the innovations. This year, we would be hard pressed to find a fresher, more inspiring story than the one unfolding at the 70-year-old Palm Springs Art Museum.

After Meyerman became chairman in 2006, he articulated a mission for the museum to become “a great museum.” “I asked every stakeholder — the trustees, board committees, councils, and staff — what each of them can do to be better,” he says. “It gave every individual an opportunity to find ways to execute better. We put an end to layoffs to allow our staff to focus on the job at hand.”

The harbinger of the museum’s transformation came in 2005, when the museum dropped “Desert” from its moniker in favor of “Art” — a signal to visitors, enthusiasts, and other art institutions that more change would follow. “It was clear that we could be great in art,” Meyerman says. “And with our refurbished Annenberg Theater, we could adjust programming and become great in the performing arts.”

Next came the announcement that Nash, former director of the Nasher Sculpture Center in Dallas, would replace the retiring Janice Lyle, who had a 22-year tenure, including 13 years as director, ushering the museum through the transition from being an institution that included natural science and Native American heritage to one that emphasizes fine art. Nash, the former deputy director and chief curator of the Dallas Museum of Art and associate director of the Fine Arts Museums of San Francisco, proved to be the perfect fit.

“To become great, we must be perceived as a successful institution that manages its business well,” Meyerman says. “Almost all of our supporters are business people; they expect the museum to be managed well. If we are successful at that, we can attract financial support for the short and long term.

“None of this would have been possible if we had not been able to attract an amazingly qualified, widely recognized and highly respected executive director,” he continues. “Dr. Nash, in turn, attracted Dr. Daniell Cornell, who has added greatly to our curatorial strength and reputation inside and outside the Coachella Valley.”

Meyerman and Nash have been rethinking the museum’s layout and design and fine-tuning the way it raises and spends money and selects and promotes its programs. With art prices breaking records against the general economic current, few museums can afford to purchase art from operating revenue. Most rely on donors.

“Once you have your financial house in order, it instills confidence and encourages giving,” Nash says. “This requires a higher endowment (which will be part of our 75th anniversary campaign), reaching out to more foundations, and improving efforts on our annual fund.

“We went from 0 to 100 [mph] very rapidly in long-term planned giving,” Nash continues, referring to the museum’s Legacy Circle composed of patrons who include the museum in their estates. “There was a realization that this is a huge component now — for money and art.”

The museum also doubled its membership in the past two years. As Meyerman says, the museum “began reaching out to virtually every constituent in the region, with a particular focus on younger audiences. It is becoming a great place for people from all walks of life to meet and share common interests.”

Expansion into the East Valley also factors into the museum’s long-range planning and 75th anniversary. Recognizing the shifting demographics in La Quinta and Indio, in particular, Nash and the board of trustees are assessing what expansion could mean to the museum — and how to do it while enhancing its Palm Springs presence.

Meanwhile, Nash says, “We’ve done some reorganizing and promoted some people. The staff is excited. They get the spirit. More delegation of authority encourages people; they’re empowered. You can see it in our Insight [member] magazine, on our new Web site, and in the building itself.”

Benefactors Jim and Jackie Lee Houston donated $1 million to the renovation, a vital contribution that encouraged others to trust and give to the grand vision.

The second phase of the E. Stewart Williams-designed structure’s interior renovation was completed this summer. A year earlier, hardwood floors replaced carpeting over nearly half of the main level, and the Annenberg Theater was restored in bright-orange fashion, true to its original design, from the carpeting to the upholstery on the 433 seats. This summer, hardwood replaced tile in the Houston Atrium and Sinatra Sculpture Court, as well as the carpeting on the mezzanine level. Walls came down, spaces opened, and the sun now shines through the windows. “The natural light and views change the perspective and the experience of the building,” Nash beams. “Finally, you can see what Stewart Williams was talking about: The building takes advantage of the light and natural surroundings.” The Wells Fargo and Annenberg foundations, as well as the trustees, funded these renovations. Next summer, the makeover will reach the third floor.

Last season, one of the two renovated wings showcased Picasso to Moore: Modern Sculpture from the Weiner Collection, which included works by Alexander Calder, Henry Moore, Isamu Noguchi, Jacques Lipchitz, and many others on long-term loan to the museum. In the other wing were the groundbreaking 1996 video/sound installation Bill Viola: The Crossing, the photography exhibition Julius Shulman: Palm Springs (paired with a book by Rizzoli), and a 35-year retrospective of paintings and drawings by local favorite D.J. Hall.

Nash’s interest in sculpture — demonstrated in world-class style when he curated the Picasso to Moore exhibition — will become more punctuated with the reinstallation of the sculpture gardens flanking northeast and southeast ends of the building. The plan also calls for new lighting and revitalization of the landscaping.

“Our main focus is modern and contemporary art,” Nash says, adding that photography, architecture and design, and studio glass programs also will flourish. “And we will always retain allegiance to Western art. It’s a natural for us.”

The season opens with Enrique Chagoya: Borderlandia, the first comprehensive exhibition of the mid-career California artist’s politically and pop culture-infused paintings, drawings, and prints. In November comes Against All Odds: Keith Haring in the Rubell Family Collection, followed by a Robert Mapplethorpe exhibition organized by Palm Springs Art Museum and a 70-year retrospective of paintings by Wayne Thiebaud.

Nash intends to cultivate relationships with public and private art institutions, such as the one with the Rubells in Miami, to elevate Palm Springs Art Museum. “This will bring us quality-wise into the L.A. art scene, part of a constellation of museums in Southern California,” he says.

Cornell, the former director of contemporary art projects and curator of American art at the Fine Arts Museums of San Francisco, joined Palm Springs Art Museum last spring as deputy director for art. He now leads the curatorial team and spearheads exhibitions and acquisitions, especially photography and contemporary art. Longtime chief curator Katherine Hough and curators Christine Giles and Sidney Williams each have a specific focus, with Hough sharpening the studio glass program and working with the Contemporary Art Council, one of the museum’s largest membership groups.

Councils reach into a variety of communities and help raise money to acquire art, subsidize exhibitions, and affect other programming. In addition to the one for contemporary art, councils include Western Art, Museum Associates, Architecture and Design, Artists, Annenberg Theater, Docents, and Museum Service.

Williams, the curator for architecture and design, works with a complementary council, as architectural drawings, models, and archives become a key sub-theme of the museum’s research, exhibitions, and acquisitions.

Cornell, who held curatorial posts at Yale University Art Gallery and the New Museum of Contemporary Art in New York, will guide a new Photography Council.

A bright mind for photography comes at a perfect time: The museum received an anonymous gift of 543 photographs and limited-edition books with original photography dating from the mid-19th to the late-20th centuries encompassing a range of important artists and styles. The collection spans from early views of Egypt and the Holy Land by Francis Frith and photographs of Rome by James Anderson from the 1850s and ’60s to contemporary work by artists such as Duane Michals, Milton Rogovin, Jock Sturges, Joel Peter Witkin, and Arthur Tress. It also includes examples of work by early 20th century pictorialists, including Heinrich Kuhn, Julia Margaret Cameron, Alvin Langdon Coburn, Alfred Stieglitz, and Edward Steichen and modernist masters such as Paul Strand, Andre Kertesz, Andreas Feininger, Helen Levitt, Brassai, and Harry Callahan.

“This gift transforms the role of photography in the museum’s collection and enables us to share hundreds of important works with residents and visitors,” Nash says. “It is a foundational gift that propels the museum into the ranks of serious photography programs and provides a substantial base for growth.” Prior to receiving this gift, the museum’s photography collection emphasized two areas: desert landscape photography and celebrity photography from the 1930s to the 1960s in Palm Springs and Hollywood.

“We’re organizing the Mapplethorpe exhibition and producing one of the most important Mapplethorpe publications in the last decade,” Nash says, adding that the exhibition will travel to other institutions after it closes in Palm Springs. “It puts us in the league with major national museums.”

And Nash says there will be more news soon about major gifts of works of art. That’s a sure foot forward in becoming great.