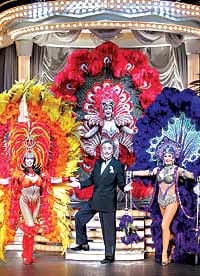 It’s like Topsy,” Riff Markowitz says. The impresario leans back in his chair for a moment before noting his interviewer’s uncomprehending stare. He heaves a sigh. “You don’t know who Topsy is, do you? No one knows anything about literature anymore. This is what’s wrong with California’s educational system.”

The writer will later learn that Topsy, noted for growing at a remarkable rate, appeared in Uncle Tom’s Cabin, a book unlikely to have turned up on many public-school reading lists in the past few decades. In some ways, it’s a perfect Markowitz moment: nostalgic, curmudgeonly, and politically incorrect — just like his routines as master of ceremonies at The Fabulous Palm Springs Follies.

As founder and producer, Markowitz doesn’t have to worry about offending the boss. Besides, the show has a record of success under his guidance. In fact, it has grown like, well, like Topsy. But even the curmudgeon-in-chief admits he’s not the main attraction. Neither are the various celebrity headliners that have graced the stage of the Historic Plaza Theatre over the years. No, that honor belongs to a unique ensemble of high-spirited singers and dancers, all in their mid-50s or beyond.

“Who’s going to pay to see old ladies’ legs?” a local entertainment writer quipped at the outset. For a time, the cynicism seemed justified.

“It was frightening,” Markowitz recalls. “By the end of the second week, we had no advance sales. The usual presumption would be that word of mouth is not strong enough and so people are not calling in for tickets, until I realized somewhere around the third week that people in this town don’t buy green bananas. Although they were buying tickets, they were not making long-range plans, like for next week.”

Markowitz, who retired as a television producer in his 50s, says he conceived the notion of a Ziegfeld Follies-style revue featuring performers old enough to have seen the original as a way of occupying himself during his dotage. The general theme of the show was inspired by Palm Springs’ history as the playground of the stars in early and mid-20th century, and the content dictated the casting.

The Real Deal
“Young people would have had perhaps more energy, but all the people in this show either did or saw people do the authentic performance,” Markowitz explains. “They are as authentic as any of us can be who try to remember what it was like. We were there. It isn’t like a young actor doing research and saying, ‘Well, I’ve looked at the old films, and I can dance that way.’ Dorothy Kloss does and did always dance that way, and the people she worked with danced that way for the 40 years before she danced with them, and those people worked with people who had danced that way for 40 years prior.”

Kloss, 82, is the Follies oldest current chorister. During the 1940s, she performed in swanky Chicago nightclubs and appeared on television when it was still a novelty.

“Everybody was just breaking in,” she recalls. “They had just one camera, which doesn’t always work with a dancer. ‘Oh, she disappeared! She’ll be back.’ But it was great fun.”

She is enjoying her 11th year with the Follies.

“Where else in the world at this time of life can you get a standing ovation?” she asks. “Of course, it isn’t all for me; I was hoping it would be, but that’s just the way it goes. But that is the best part: when that audience stands up and they applaud. And then also in the lobby, when we shake hands with guests —  I think that is the highlight because the people relate to us so well. There’s a kind of warmness, and they give back the magic I felt at 15 when I started in the business.”

Although Markowitz runs a tight ship, Kloss has no complaints.

“He has been a joy for me to work for,” she says. “A lot of people think we’re restricted and it’s like a school, but the reason he has such a successful show here and the reason it has lasted so long is because of the rules and the regulations. There are no excuses in the show.” That strictness comes as nothing new. “We were trained for this. In show business, if you’re not going to be on time, it’s not acceptable. In New York, you’re fired. Goodbye.”

“I like an organized life,” she says. “That’s the reason I like the Follies. I know what I’m going to do and where I’m going to be. We have a hotline that we must call every night after the show or in the morning. I’m sure this is annoying to a lot of people, because we leave work at 10 o’clock at night after being here from 12:30. But that is the rule; because if you don’t, you don’t know what’s happening the next morning. If someone hurts themself, you have to shift everything around. It’s good for an older person like me. It keeps you alert to what’s happening. That’s the life of the Follies.”

Getting Better With Time
At 70, she’s not the oldest, but Leila Burgess can justly claim to be the most senior of the Follies dancers. She attended the show in its first season and saw room for improvement.

“There could have been more dancing,” she says. “The shoes shouldn’t have all been just black shoes. There was one stationary set that never changed. It seemed like there were two lights.”

The next year, she was on stage. Now in her 14th season, Burgess not only holds the position of company dance manager but also serves as creative consultant, having input into almost every aspect of the production. And as the reputation and resources of the Follies have grown, the production has become more elaborate — presenting new challenges.

Each show features multiple sets. Since the Plaza began life as a cinema, it lacks the overhead and wing space into which stage sets might be moved when not in use. Stagehands must therefore continually assemble and disassemble the sets and transport them in and out of storage areas during each performance.

Costumes have become more complicated and expensive as well, particularly in the pretty-girl number, a traditional revue feature in which showgirls parade and pose to the accompaniment of “A Pretty Girl Is Like a Melody” and similar songs.

“In the first year, the pretty girls wore large hats,” Burgess recalls. Now they wear elaborate costumes that can cost up to $40,000 each. Each includes an aluminum frame worn as a backpack, to which the wardrobe department attaches plumes, rhinestones, and other ornamentation. One memorable creation incorporated several Charlie McCarthy heads. The backpacks can weigh up to 18 pounds apiece, and that’s without taking the weight of the rest of the women’s wardrobe into account.

In Markowitz’s opinion, the pretty-girl number stands as one of the best segments of the show.

“It makes you aware of a sexuality and a life force that when you’re younger you simply can’t imagine will still exist at that age,” he says. “There’s a kind of enormous hope that radiates, and you see they really look terrific and they move so well and they’re so alive. To keep yourself vital and alive, you really have to have a goal. The Follies typifies that. ‘What does Grandma do every day? Well, she goes to a theater, takes all her clothes off, puts on 32 pounds of feathers and jewels, wears 5-inch heels, and walks down a flight of stairs to ‘A Pretty Girl Is Like a Melody.’”

That experience of remembering what was best about the past while finding beauty and romance in the present is what has made the Follies such a success in its first 15 years.

The Fabulous Palm Springs Follies opens its 15th season on Nov. 1 at the Historic Plaza Theatre with guest star Anacani, once a regular on The Lawrence Welk Show. Acts include Olate’s Canine Capers and comic Janice Hart. Matinees start at 1:30 p.m., evening performances at 7 p.m. No shows on Sundays and Mondays in November. The season continues through May 21, 2006. Information: 327-0225