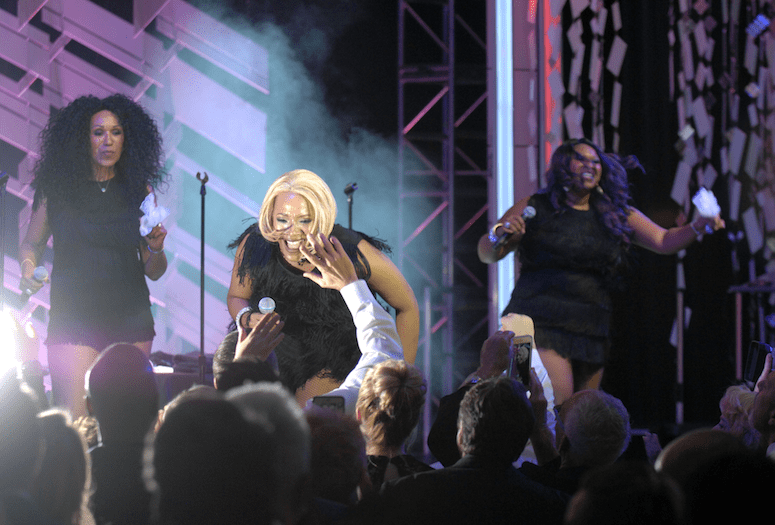 The Pointer Sisters lured most of the audience to the front of the ballroom with a well-rounded performance of their hits.
PHOTOS BY DIMITRI HALKIDIS

More than 1,500 guests walked the red carpet at the Steve Chase Humanitarian Awards gala in February, which featured paparazzi photographers, a multimedia fashion lounge where red carpet standouts were interviewed on camera, and an installation of sculptures by Karen and Tony Barone. One hundred Desert AIDS Project volunteers welcomed attendees to the event.

This all occurred before the guests even entered the Palm Springs Convention Center for the gala.

The gala began 23 years ago and in honor of interior designer Steve Chase, a DAP donor, volunteer, and board member who passed away in 1994. Since its inception, the event has raised millions of dollars to care for people living with HIV and it is a highlight of the desert social season.

Lance Bass, of the boy band NSYNC, served as emcee. He welcomed Barry Manilow as the first presenter. Manilow posthumously presented his friend Elizabeth Taylor with the Partners for Life Award and illustrated why she is remembered as an early leader and advocate for the care of people living with HIV and AIDS.

Humanitarian Awards were presented to Barbara Keller, who has served as Steve Chase co-chair for seven years and is also co-chair of the 100 Women annual giving program as well as a member of DAP’s board of directors; G. Aubrey Serfling, Eisenhower Medical Center president and chief executive officer; and Martin Masiello, Eisenhower’s executive vice president and chief operating officer.

Following dinner, The Pointer Sisters lured most of the audience to the front of the ballroom and, after a well-rounded performance of their hits, the after party began, featuring performances by ’90s dance duo LaBouche, plus DJs, other dancers, and a series of colorful and tasty surprises. Guests danced the night away.

The Chase has a reputation among trendsetters as one of the few gala events where attendees are encouraged to have fun and take risks with fashion … and the guests did not disappoint. Black sequins and Mr. Turk dinner jackets were de riguer for many men, as were well-fitted and accessorized tuxedos (which held their own alongside long gowns and sexy short dresses).

Keller did not disappoint in her forest green fitted sequin sheath with a hem in matching fur. The honoree’s husband, Jerry Keller, complemented her style with a green bow tie and pocket square.