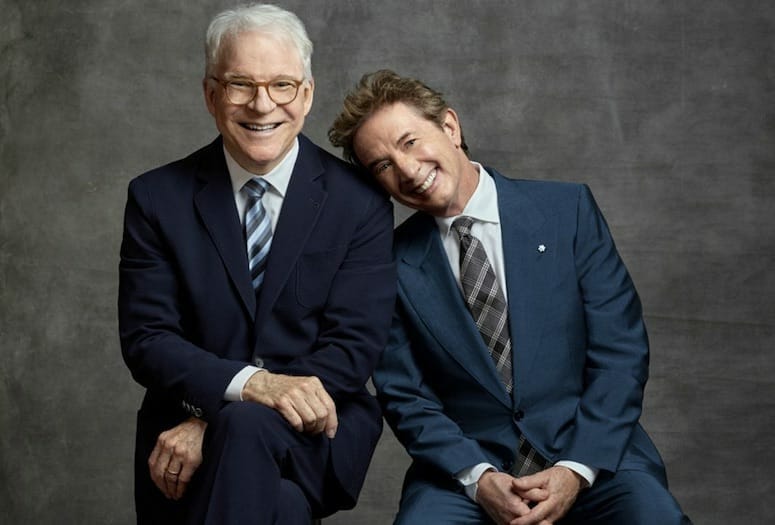 Perhaps more than ever, we all need a respite from the unsettling events happening in our country. It's a challenge to think of two comic personalities who are more capable of providing comic relief than Steve Martin and Martin Short. The duo can riff off one another with ease using a razor-sharp, self-deprecating wit that comes with being great masters of their craft.

Both, of course, have had long, distinguished careers. Martin has been a popular stand-up comedian for five decades, had best-selling comedy albums, and starred in hit movies, such as The Jerk, Roxanne, and L.A. Story. Short has long been regarded as a comic genius in his native Canada due to his work on the sketch comedy SCTV and later in the U.S. on Saturday Night Live, made hit films such as Innerspace and Mars Attacks!, and won a Tony award for his performance in Little Me. He might be most famous as under-informed celebrity interviewer Jiminy Glick on the Comedy Central series. Martin and Short became pals while filming the hit comedy Three Amigos! (Chevy Chase was the third) in 1986 and later worked together in the Father of the Bride movies.

The duo also stars in the hit Hulu comedy series Only Murders in the Building along with Selena Gomez that focuses on a trio of neighbors obsessed with true crime (Season 2 will premiere June 28). This summer, Martin and Short are traveling North America with their live show You Won’t Believe What They Look Like Today!, which will be performed on June 18 at Agua Caliente in Rancho Mirage.

The longtime friends and colleagues recently spoke with Palm Springs Life, the morning after the Uvalde, Texas school shooting, about how to find humor during dire times, why their TV series is resonating with viewers, and, yes, the colonoscopy parties they host with Tom Hanks.

...we're just our own little pocket. We're married on every other weekend and then we're not married, you know?

— Steve Martin on his chemistry with Martin Short

Where do you find inspiration for your humor when there's so much tragedy going on in the world?

Martin Short: Our philosophy of this show is that it can provide a respite from the horrors of the news that night. So, we try not to do a political show, even though we both are political people, but we appreciate that the audience is often split. So, you don't want to make anyone feel guilty about their, let's say horrible lack of backing for gun control in America. So, you don't bring it up.

Steve Martin: When I was very young, it was probably 1963, so I was 18 years old, and I was working at Knot’s Berry Farm doing a show. And on that day, John F. Kennedy was assassinated. We thought, well, we can't possibly put on a show. We cannot. That show will definitely be canceled. And the producer, the directors said, no, we're going to do the show. And we did the show, and it was like nothing had happened. In fact, they were laughing harder than they usually do. And I thought, oh, this must be providing something to people. And that's sort of what I've gone with whenever these things have come up. I mean, I hosted the Oscars on the day we invaded Iraq.

Martin Short: And I remember the headline in Variety the next day after the Oscars when you hosted.

Steve Martin: Yeah, what was that?

Martin Short: You think there are bombs going off in Baghdad? [Both laugh.]

You’re both very spontaneous comics. Do you adapt your show to each audience or is it closed?

Martin Short: Well, first, I find the audiences are not fairly different from state to state that we play. I mean, tomorrow night, we'll play in Windsor, Ontario, and we will adjust some material for the Canadian audience. But you know, if you play in Massachusetts and then you play in New York state, same audience. They laugh at the same thing.

Steve Martin: Yeah. We wouldn't go to Texas or Florida and do certain kinds of jokes, but we don't hype them up for New York City. It's basically the same.

You guys were recently on Jimmy Kimmel’s show and revealed you host colonoscopy parties with your buddies, Tom Hanks and Walter Parks. I couldn’t determine if this is real or a bit. If it’s real, should other men follow your example?

Steve Martin: That's real and I highly recommend it. Yeah, it's a good way to get it done and get a few laughs out of it.

VIDEO: View a Season 2 tease for Only Murders in the Building.

Your series Only Murders in the Building has really connected with viewers. Do you think this is partly because of how themes of loneliness and finding connections have been a result of the pandemic?

Martin Short: That's an interesting question. I don't know if that's true. I think that hits are very, very rare, true hits and I think they're based on many factors. I don't think Steve and I are a minor portion of that factor. I think Selena Gomez is a big part of that factor. I think it’s also because of great scripts. I think if you put the three of us together in a crime caper and the writing had been mediocre, I think we would be off the air. So, I think it's a combination of great writing, good casting and...

Steve Martin: A good idea. You've got a crime, which keeps people involved, a whodunnit. And then you have two brilliant performers. And you know, it just sort of worked out. It's not a chemistry that you can just say, okay, let's do that, and we'll have a hit. It's a little bit of magic.

Your live show is called You Won't Believe What They Look Like Today, which gives people a sense of nostalgia and indicates new humor. So, I'm wondering how different is your life from what you expected it to be 40 years ago?

Steve Martin: I had no idea that my life would be like this. I had no idea. I figured I'd probably be over show business. But then we've had this, well, I wouldn't call it a resurgence, but we've had some hits. We've got our TV show, which is a hit, and I feel very, very lucky to have this happen at this stage of life, you know?

If you guys had to pick one clip for an awards show reel for the other person, which would you choose as the other’s funniest moment?

Steve Martin: Oh, my, that's a tricky one.

Martin Short: I don't know how to answer that. I mean, I could say something from Roxanne, but then there are pure moments from Father of the Bride that Steve's done, or The Jerk. I just saw it again, I hadn't seen it for 20 years and I saw it a month ago and laughed all the way through. So, with a long career, that's a tricky one.

Steve Martin: Well, that's nice of you to say, but also, I mean, I wouldn't know which movie, if he was getting nominated for a lifetime Emmy, I would have a ton of things to choose from Jiminy Glick to Ed Grimly to the synchronized swimming sketch on SNL.

Have you spent much time in the Palm Springs area or is this just a stop on the tour?

Steve Martin: I actually own a home in the desert. I've been to Palm Springs many times. I had a friend who would go and vacation there and I'd stay with her and her husband. So, I've always loved it. I mean, my first girlfriend, Nina, shot a movie in Palm Springs and it was called The Cool Ones. This would be in the ‘60s and I still see it and I could see her. She was an extra, walking across the scene. So, I always liked to watch The Cool Ones and remember staying at a Motel Six.