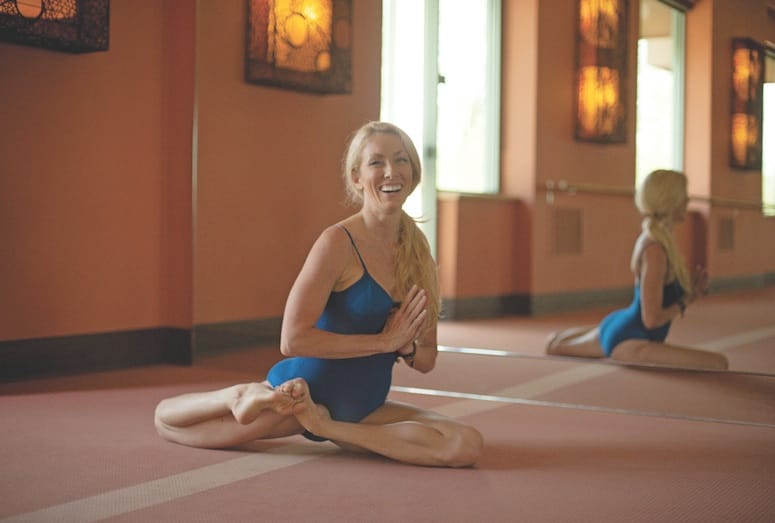 Kim Tang relaxes in an asana, or posture, at Bikram Yoga University Village in Palm Desert.
Photos by Elena Ray

In 2012, USA Yoga, a nonprofit organization, petitioned to have yoga included in the 2016 Olympics. Detractors thought yoga as a sport was an oxymoron, while supporters said it was analogous to figure skating.

Competition yogini Kim Tang, a mother of three and co-owner of Palm Desert’s Bikram Yoga University Village, defies stereotypes that all its practitioners are 20-something former gymnasts. After decades as an aerobics teacher and runner, Tang transitioned to yoga in 2003, competing in her first Southern California Yoga Asana Championship in 2007 and winning it three years later. She placed fourth in national competition in 2014 and nearly made the national team this May.

How did you get into yoga?
I started yoga about 12 years ago. Prior to that, I was a marathon runner. I didn’t know what yoga was. I thought it was a stretch class. I took this yoga class and I really liked it. I started attending once a week and was running about five days a week. Eventually I was running three days a week and doing yoga twice, and eventually I wasn’t running whatsoever. I haven’t run a single mile in 10 years … and I am absolutely, positively in the very best shape of my life.

How does Bikram yoga help us get our heart healthy?
Bikram yoga is an exact sequence that starts with a breathing exercise, then 26 postures, two times each, and then finishes with a breathing exercise. Each posture prepares you for the next. By the time you’ve gone through the entire sequence, you have worked every single cell in your body. The room is heated to 105 degrees with 40 percent humidity. We try to be really exact about that.

Why?
There are similar conditions in India, and it makes you sweat; it’s an easier, cleaner sweat. The breathing exercises oxygenate your blood. While you’re breathing in the warm air, the heat is literally dilating the blood vessels. And then the standing balancing series is cardiovascular because you are holding stillness against gravity; your heart is beating hard. So now you have oxygen-rich blood pumping hard through dilated vessels. Kim Tang: "I was a marathon runner. I didn’t know what yoga was. I thought it was a stretch class."

How did competition yoga come about for you?
My teacher at that time told me about the competition. I had no clue what I was getting myself into. You have three minutes to do seven postures. The first five postures are compulsory. The next two postures are optional so you can show your affinities, whether it’s back bending or arm balancing or whatever, so there is some room for personal expression.

Tell us about your first competition.
When I got there, I saw these very dedicated, very high-level practitioners, and it blew my mind. It inspired me to get back and work harder. This event has been the biggest inspiration for me in the context of yoga. I’ve been to every national. At some point, it really became a passion of mine for people to see what is possible through hard work and dedication. You are sharing yourself by sharing your practice in a public event.

What are these events like for spectators?
As a spectator, I was literally moved to tears by watching the connectedness, the ease (of) the yogi or yogini. It is a very deeply personal moment in a group setting. It’s less something that you see and more something that you feel. Every spectator is just holding their breath.

When was your most recent competition?
Three weeks ago. I’ve worked hard to prepare a very high-scoring routine (in which) I can actually demonstrate mastery. No one was more surprised than I that I fell out of a posture. I had three custom leotards with me in hopes of representing the United States in the international event in India in December … and then the entire thing immediately vanished. Although I had a moment afterward, I was able to be happy in the conditions that existed. That is yoga consciousness.

What kind of resolve does it give you for the future?
On my Facebook page, I posted a picture of myself in that posture and said, “Thank you for teaching humility and to be able to be happy with the circumstances as they exist.” I spent a little time letting go of it, and then I got a dose of passion back and had a good back bending day. I said to myself, “You love doing this!” Nothing has changed, nothing is lost. My value is not diminished based on a posture.