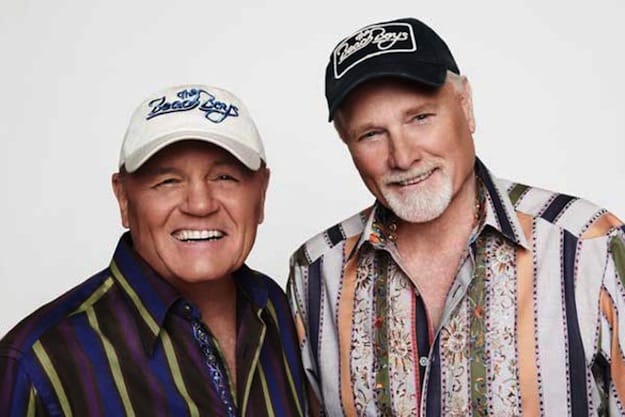 In a sea of contemporary bands like Surfer Blood, Best Coast, and Luna Is Honey, shines the gilded glow of The Beach Boys.

The venerable California-born super group is known for its sterling harmonies, clever use of alternative instruments like the Theremin, and the ability to encapsulate the sounds of summer with just one chord.

However, younger audiences may know The Beach Boys’ song “God Only Knows” as the opening theme to HBO’s [defunct] series “Big Love,” or as the originators of Macaulay Culkin’s recent viral video rendition of “Kokomo.” No bother; here’s the history of the Beach Boys, in short form:

In 1961, brothers Dennis, Carl, and Brian Wilson formed a music group with their friend Al Jardine and their cousin Mike Love. A year later, they signed to Capitol Records and began making music professionally. The kids from their hometown of Hawthorne, Calif., as well as teens from around the United States, fell in love with their killer harmonies and playful nod to beach culture.

Brian — largely viewed as the leader of the pack — found himself sinking into the depths of mental illness. Despite his fight, his skills in the recording studio led to Pet Sounds, which is regarded as one of the most influential rock albums ever released. Oh, and he fathered two-thirds of the girl-group Wilson-Phillips. You’re welcome.

As the years progressed, members came and went: Dennis died in 1983; Carl in 1998. There were legal fights over royalties and publishing rights, as well as several very public changes in lineup, including the termination of Jardine, and the addition of stage and television star John Stamos. Yes, Uncle Jesse was the Beach Boys’ drummer during the late ‘1980s – early ‘90s.

The Beach Boys have also had some impressive fans over the years. Producer Terry Melcher (son of Doris Day) produced many of the group’s hits, including “Kokomo” before his death in 2004. As well, Paul McCartney has often spoken of his love of the group. Brits cherished The Beach Boys so much, that they helped the band achieve several chart-topping positions including a No. 1 in 1966 for the single, “Good Vibrations.”

Experience The Beach Boys at 9 p.m. June 7 at Morongo Casino Resort and Spa in Cabazon, Calif.

Retraction:
A representative for the Beach Boys has confirmed that Brian Wilson is no longer touring with the band, nor is Al Jardine. The Beach Boys are led by Mike Love and Bruce Johnston, and will perform with Christian Love, Randell Kirsch, Tim Bonhomme, John Cowsill and Scott Totten. This concert will not feature Brian Wilson, Al Jardine or David Marks. So hopefully you caught the 2012 tour to see those members on stage. Sorry for the inconvenience.