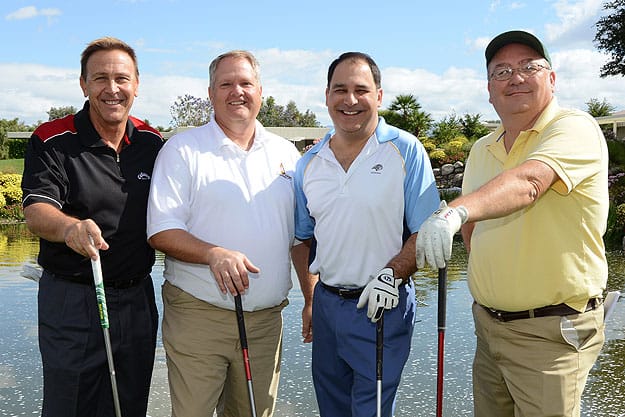 The 1965 Dick Wilson-designed golf course on Sunnylands, the former 200-acre estate of Ambassadors Walter and Leonore Annenberg, was once walked by the likes of Presidents Ronald Reagan, Richard Nixon, Gerald Ford, and George Bush. Players included former Secretary of State George Shultz, pro golfer Lee Trevino, and entertainer Bob Hope. On Monday, May 6th and Tuesday, May 7th, members of the community joined the ranks of famed golfers as The Annenberg Retreat at Sunnylands hosted three unique golf events at the historic golf course.

An early morning tee off on May 6th was the opportunity for tourism professionals, local government officials, and members of the press to learn more about the private golf course that is part of the property operated by The Annenberg Retreat at Sunnylands where high-level government officials and heads of institutions and programs come to affect change in the world. Often asked about Sunnylands, these community leaders now have additional insights into the property that welcomed over 66,000 people in its first year of operation.

Later that same afternoon, students from First Tee Coachella Valley took to the golf course as a celebration of the completion of an eight-week education program that took place at Sunnylands Center & Gardens.  First Tee is a World Golf Foundation initiative dedicated to providing young people of all backgrounds an opportunity to develop, through golf and character education, life-enhancing values such as honesty, integrity, and sportsmanship. The local desert chapter operates as a partner to many of the desert recreational activity groups.

Tuesday’s golf event was an opportunity for clients of Desert Arc to partner with students from First Tee in a day of fun on the course. Desert Arc provides educational and recreational services to over 600 mentally and physically disabled adults throughout the Coachella Valley, teaching life skills and vocational training. Employment opportunities are provided at locations such as Sunnylands and other local businesses. This was year two of welcoming both First Tee and Desert Arc to Sunnylands.