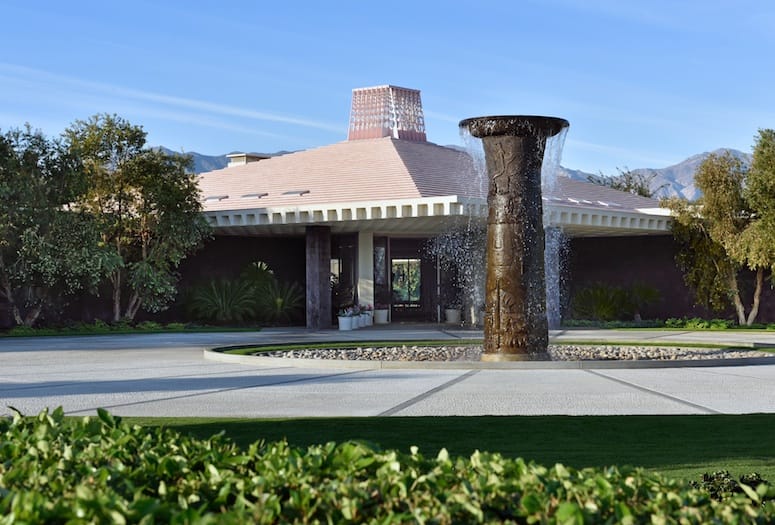 While tickets for the final Sunnylands House Tour of the season go on sale at 9 a.m. May 1 (PDT), the Rancho Mirage attraction caps off a season of 50th anniversary celebrations with three films on the Great Lawn in May.

Tickets for the $40 house tour – featuring the art, architecture, and history of the midcentury modern home of the late Ambassadors Walter and Leonore Annenberg – can be purchased only through www.sunnylands.org – the Sunnylands website.

Tours that go on sale May 1 will be conducted May 19 through June 3. Sunnylands closes for the summer June 4, and reopens Sept. 22.

Formerly the Annenbergs’ winter estate in Rancho Mirage, Sunnylands is now a high-level retreat center and a diplomatic venue known as the “Camp David of the West.” President Barack Obama has visited the 200-acre estate six times, including meetings with President Xi Jinping of China, King Abdullah II of Jordan, and the leaders of 10 Southeast Asian nations. View of the Gardens and the Great Lawn rear of the Center. Gardens designed by the Office of James Burnett.

The House Tour is a guided, 90-minute walk through the 25,000-square-foot home, completed in 1966, where the Annenbergs famously hosted U.S. presidents, British royalty and Hollywood stars.

The three films to be screened in May showcase the music, the humor, and the edgy political satire of the 1960s.The Oscar-nominated films will be shown free of charge on the first three Friday evenings in May to mark the completion of the Annenbergs’ estate in Rancho Mirage in 1966. Presented in partnership with the Palm Springs International Film Festival, the movies are:

• May 6 – A Hard Day's Night (1964): Featuring many of the Beatle’s greatest hits, the film follows the Fab Four on a “typical day” as they elude hordes of fans to make their way to a concert in London. Running time: 92 minutes.

• May 13 – Dr. Strangelove, or: How I Stopped Worrying and Learned to Love the Bomb (1964): Cold War tensions and fears of a nuclear conflict are the underpinnings of this political farce directed and co-written by Stanley Kubrick. Running time: 94 minutes.

• May 20  – The Pink Panther (1963): Peter Sellers, in one of his most enduring roles, chases an international jewel thief as the blundering Inspector Clouseau. Running time: 115 minutes.

The films are shown on the Great Lawn of Sunnylands Center & Gardens, 37977 Bob Hope Drive, in Rancho Mirage. Gates open at 7:30 p.m. Movies start at 8 p.m. Filmgoers are encouraged to bring lawn chairs, blankets, and small picnic items for the outdoor screenings. Large coolers, alcohol, smoking, and pets are not permitted. With limited parking, carpooling is strongly advised.