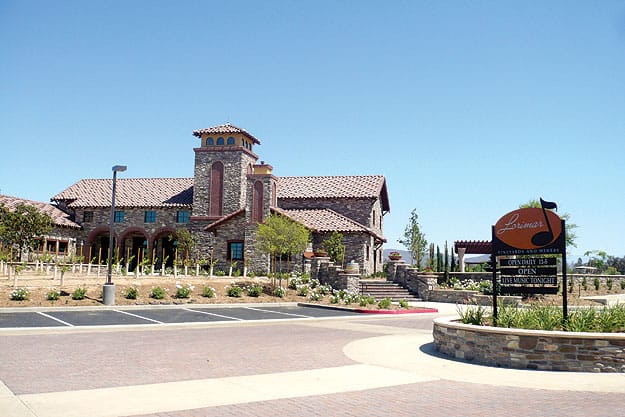 Visitors to Temecula Valley Wine Country accustomed to traveling a main road from one winery to the next now find themselves going in a circle. The first of five roundabouts planned for the wine country came online this spring as a way to facilitate the flow of an estimated 15,600 cars a day that used to stop at the intersection of Rancho California and Anza roads.

On the northeast corner, South Coast Winery Resort & Spa commands attention as Southern California’s largest winery operation, with 670 acres (including 98 in Monterey County). The 39-acre property includes a working winery producing 65,000 cases a year, a tasting room and marketplace, 76 villas, a spa, a 12,000-square-foot restaurant, banquet hall and meeting rooms, and outdoor event venues. Owner Jim Carter plans to build Carter Estates winery and resort on his 107 acres catty-corner to South Coast. The undertaking includes a production facility, 42 villas, a 180-suite hotel, restaurant and bistro, and 5,000-seat amphitheater. According to Crystal Magon, director of sales and marketing, the time line for the development is “contingent upon the economy.”

Meanwhile, South Coast is expanding with a three-story, 50-unit, all-suite hotel expected to open this fall or early winter.

“We have some beautiful meeting space, but, unfortunately, groups that are coming to use that space need more than the 76 units we currently provide,” Magon says. “We are trying to capture that midweek traveler who’s looking for off-site business facilities.”

A half-mile away (northwest on Anza Road), Lorimar Vineyards and Winery represents the area’s newest winery center for visitors. The 5,950-square-foot, Tuscan-style building includes three tasting rooms, retail space, extensive patio areas, and a small wedding lawn and bride’s room. Until the venue opened in May, Lorimar relied solely on traffic through its wine-tasting room in Old Town Temecula.

“We are doing five times the business here in a day than in Old Town,” says co-founder Lawrie Lipton. After opening in Old Town in 2010, Lorimar signed up about 600 wine club members; within a month after opening the new tasting room, membership jumped to about 950. Lorimar next plans to build a wedding pavilion, barrel room, and, eventually, casitas.

Lipton, a Canadian who first saw Temecula Valley in 2008, believes that “what this area needs is more wineries like this one — and you need the accommodations.”

“We have been farming since 1984,” says General Manager Jason Curl, noting that the tasting room built in 2003 provided a getaway “celebrated as a day in the country” and the inn lets visitors extend such a getaway. In addition to 60 guest rooms, the new building encompasses a restaurant (Ponte previously had only a patio restaurant behind its tasting room) and a cellar lounge offering a full bar and late-night dining.

One of Temecula Valley’s oldest operating wineries, Callaway Vineyard & Winery, opened a 5,400-square-foot, hilltop visitors center in July to replace the original tasting room built in 1971. The new addition includes a gift shop, tasting room, automated wine stations, and patio on the lower level and a wine bar and deck for wine club members on the second level.

Oak Mountain Winery plans to begin digging Temecula Valley’s first wine cave by the end of October. “We need the additional space, and it doesn’t take up any more of our space being undergrounds,” says owner Valerie Andrews, who expects the 8,500-square-foot cave will take nine months to complete. The winery will offer cave tours and incorporate a tasting room for a “cave club” limited to 300 members.

All these recent developments have taken place while Riverside County has been working on a new community plan for what it has identified as the Temecula Valley Wine Country Policy Area.

While the economy in general has been down, notes Principal Planner Mitra Mehta-Cooper, “we noticed that Temecula Valley Wine Country was the only region in Riverside County that was still seeing a series of development interest. People were proposing new wineries and events and large-scale resorts. … It was a good addition if Riverside County desired to make this a more international destination.”

Mehta-Cooper says there were 26 or 27 wineries in Temecula when the county prepared its 2003-2004 plan that included about some 7,000 acres in the Citrus Vineyard Policy Area.

“The vintners feel that is an extremely ambitious number just based on the available acres,” says Michelle McCue of McCue Communications, which represents the Temecula Valley Winegrowers Association. “Temecula Valley has only 1,500 acres under vine. With just 40 wineries, they’re already having to buy fruit from other regions like Paso Robles, which has over 22,000 acres planted.”

George Johnson, assistant CEO for Riverside County, explains that the almost 19,000 acres includes residential and equestrian districts and that 105 wineries represents the “land use capacity” looking 30 to 50 years in the future.

“A unique aspect of Temecula Valley Wine Country is that it has a very strong equestrian community. The county feels that’s a very symbiotic use with wineries,” Mehta-Cooper says. “We want to maintain the open and rural ambiance of wine country.”

David Bradley, co-owner of Vindemia Vineyard & Winery and California Dreamin’ hot air balloon company, agrees that the region “needs to be an agricultural area and not a real estate master-plan development.”

At the first public hearing on the county’s plan in July, about 50 supporters of Calvary Chapel spoke against it insofar as it did not take into account Calvary’s expansion plans that include a 50,000-square-foot sanctuary, 32,000-square-foot daycare and school, and 424 parking spaces. At a continuation hearing in August, vintners raised concerns about the potential effects of incorporating Calvary’s project in the Wine Country Policy Area (such as restrictions on the spraying of pesticides and serving alcohol near schools). Falkner Winery, whose land is adjacent to the Calvary parcel, would particularly be affected.

McCue points out that Temecula’s limited amount of acreage available and suitable for grape growing makes this a critical issue for the livelihood of Temecula’s wine industry.

The Riverside County Planning Commission directed county staff to determine the scope of work necessary for a revised environmental impact report that includes churches as an allowable use in the Wine Country Policy Area. “Then we can provide direction to our EIR consultants,” Johnson says. “From that point on, it’s likely to be approximately six to nine months before we would be back to the planning commission for the next hearing.”

Danny Martin, an integrated agribusiness appraiser who also owns 15 acres on which he grows grapes that he sells to local wineries, says he is “very bullish” on Temecula Valley.

“We’re within one-and-a-half hours of 22 million people,” Martin says. “What needs to happen is we need more wineries to attract people not just to come for the day, but to make this a destination — to stay three or four days.” He adds that increased tourism would be good for the county as a whole and nearby resort areas like Greater Palm Springs.

To balance the needs of wineries to increase tourism with the interests of residents and the equestrian community, the county’s plan disallows the opening of wineries on less than 10 acres and adds restrictions on the number of uses (i.e., restaurants and resorts) on a property. For example, a winery would need at least 40 acres to open a full-scale resort and at least 20 acres for smaller lodging (inn/hotel) and/or to hold special events. To accommodate the 28 wineries with existing uses that would be disadvantaged under the new restrictions, Mehta-Cooper says, the plan provides for the establishment of a Wine Country – Winery Existing zone.

“I think the quality of the wine has come up substantially in the last five or six year,” Martin says. “There’s a lot of new talent coming here from wineries in the north. It’s just a natural progression.”