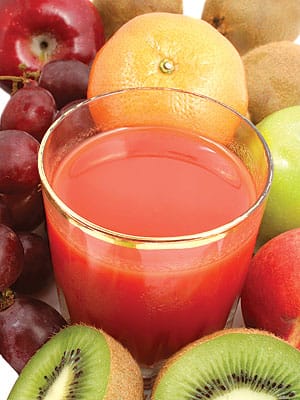 The kitchen countertop disappears under a colorful mosaic of fruits and vegetables, bounty from an early-morning foray to the local farmers market. Certified to be organic, they are a testament to the best nutritional intentions, all 14 destined for the juice extractor’s maw, standing at the ready to turn the lot into a high-powered, cancer-fighting drink. Ah, juicing for the cure.

Juicing is lauded as a great source of nutrients and phytochemicals and is especially valuable when chewing or swallowing is a problem or when a poor appetite is an issue, as suggested in the American Cancer Society’s Complete Guide to Nutrition for Cancer Survivors.

"The Evidence," a paragraph that summarizes the pros and cons of most subjects in the book, adheres to one of Hippocrates oft-cited quotes: "There are in fact two things: science and opinion. The former begets knowledge, the latter ignorance." This, says Barbara Grant, one of the four authors, was the intent when the "Complete Guide" series was launched last year: to disseminate information in a factual, evidence-based manner.

"We approached this material in a consumer-friendly way and tried to give straightforward guidelines to patients, who can be misled by all the confusing and contradictory information out there," says Grant, a board-certified specialist in oncology nutrition at Saint Alphonsus Cancer Care Center in Boise, Idaho.

The guide also examines "alternative therapies," including vegetarian and macrobiotic diets, and offers an informative section on a more new-age wheatgrass diet. Dietary supplements — including vitamins, minerals, and herbs — are reviewed with microscopic precision.

Your uncle ate a Big Mac,with cheese every day for most of his adult life, washed it down with a beer, and died disease-free at the respectable age of 88. You, on the other hand, have been righteously diligent about your diet for most of your adult life, but a recent biopsy came up positive for cancer.

Same gene pool, but different DNA — and one little strand of yours got in a twist.

Cancer is sneaky that way; and no amount of high-minded eating could have prevented it. But it’s entirely possible that a careful diet protected a whole lot of your cells that might have been vulnerable to DNA damage.

When the first draft of the human genome was completed 10 years ago, it paved the way for what are now standard practices in the nutritionist’s arsenal: DNA analysis and nutrigenomic testing. The first can tell you how fast you metabolize certain medications and herbs; the second offers insight on how well your molecular identity will handle certain foods.

For the cancer patient, this futuristic food mapping can mean an easier transition before, during, and after treatment. For every-one else, it represents the next generation of dieting: tailor-made food plans based on your own molecular identity, like an internal GPS.

"We used to think it was simple, that each cell has a code — like a parts list — and if we could only learn the code, we’d know a lot more about the human body," says Carolyn Katzin, whose degrees in nutrition from the University of London and UCLA School of Public Health formed the basis for more than two decades of research into how genes interact with the environment to produce the cancer cell.

"Nutrigenomics, which literally translates into nutrition plus genetics, is a completely new approach to dieting and gets very specific in its research on foods’ importance in the development of or hindrance to cancer" says Katzin, who serves on the California Division Board of Directors of the American Cancer Society. "What we know absolutely is that, at its very basic level, nutritional recommendations need to be about one thing only: eating to protect your DNA."

The American Cancer Society guide matches nutritional therapies to specific cancers and their treatments. For example, people undergoing chemotherapy or radiation therapy for oral cancer or cancers of the neck, esophagus, or gastresophageal junction commonly encounter eating and swallowing complications. The juicer, with its phalanx of fruits and vegetables, could be a valuable weapon in achieving maximum nutritional levels.

Maintaining healthy weight is a common issue in chemo and radiation therapies for all cancers because of changes in taste and smell or feelings of fullness. The guide lists more than two dozen tricks to outsmart these side effects, including the tip to make breakfast the main meal because the appetite will be greater in the morning.

As nutritionist for the Lucy Curci Cancer Center at Eisenhower Medical Center in Rancho Mirage, Katzin travels from Los Angeles twice a month to meet with patients who prefer a personal guide to navigate the morass of information available on cancer and nutrition. She assesses individual needs based on a variety of factors, including body composition, personality, and the patient’s willingness to participate in the process.

"By the time we get to midlife, when most cancer issues present themselves, we’ve established certain eating patterns," she says. "And when I hear what people tell me, I understand more and more that we are all distinctly different; and it’s on that information that a unique plan takes shape."

Katzin’s book, The Cancer Nutrition Center Handbook, is an efficient compendium of drug- and vitamin-specific recommendations matched with various forms of cancer, as well as recipes for specific conditions related to different treatments.

It’s easiest, Katzin says, to change an eating pattern by building on what you already like from the long list of triple-A foods: antioxidants, anti-inflammatories, and anticarcinogens. For example, if you’re nuts for nuts, the lowly walnut and exotic Brazil are two that supply copious amounts of, respectively, omega-3 fatty acids and selenium, both bold cancer fighters.

By the year 2015, the American Cancer Society estimates it will achieve its goal of identifying the causes of cancer. Some facts are already known and can be put into practice. Scientists estimate that as much as 80 percent of all cancers are caused by environmental and lifestyle-related factors. At least 35 percent are diet related and in men may be as high as 50 percent.

"Nutrition has always been important to cancer prevention, but most studies indicate that dietary benefits need to start at a very young age," says Dr. Luke Dreisbach of Desert Hematology and Oncology Medical Group in Rancho Mirage. "Various diets have correlated with a decrease in certain cancers, such as low fat with fewer breast cancers. But there is no specific diet that decreases all cancers."

While it’s important to establish healthy eating principles early in life, it’s not a done deal if you didn’t get that memo.

"Remember," Dreisbach says, "it is seldom too late to correct bad habits, and doing so may help patients more comfortably and successfully deal with unavoidable treatments when cancer occurs." Hippocrates, the ancient Greek physician who considered the right food to be the best medicine, so believed in the healing powers of watercress that he built his first hospital next to a stream so he could grow it. The spiciness in watercress comes from sulfur-containing phytonutrients called glucosinolates. Studies suggest these compounds can help reduce DNA damage and display powerful anticarcinogenic properties. Next to watercress, a bowl of berries and cherries should be dietary staples — not only for their store of the phytochemicals known as quercetin and ellagic acid, but also for fiber, vitamin C, and their altogether rich antioxidant and nutrient content. It seems all the lab rats who work to prove things safe (or not) to humans agree that berries and cherries are pretty impressive when it comes to inhibiting the growth of cancer cells. People with treatment-related low white blood cell counts are at higher risk for food-borne illness. The extra effort to clean produce can loosen and remove pesticides and pathogens.

PRODUCE SPRAY
Mix one tablespoon lemon juice, two tablespoons baking soda, and one cup water in a spray bottle. Spray on produce and let sit for two to five minutes, then lightly scrub with a clean sponge or vegetable brush. Rinse thoroughly and dry.

PRODUCE WASH
Mix one-half cup white vinegar and three tablespoons salt. Stir until salt dissolves. Add to a sink of cool water and soak produce for 15 to 20 minutes. Rinse and pat dry. Reprinted with permission from Complete Guide to Nutrition for Cancer Survivors. Combine all ingredients in a blender. Optional: Serve with chocolate sprinkles.

Reprinted with permission from The Cancer Nutrition Center Handbook.