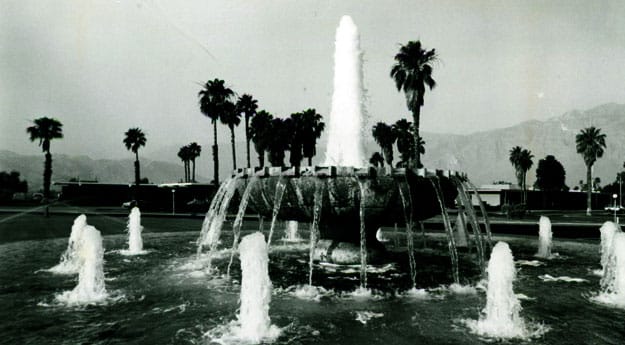 Reprinted from the December 1966 Issue of Palm Springs Life Magazine

Guadalajara is a long way south of the border from Palm Springs. But good will instantaneously transmits itself across the barriers of distance — a fact soon to be evidenced in a magnificent, night-lighted fountain which will grace the entry grounds of Palm Springs Airport's new terminal building.

Design of the fountain is a gift to Palm Springs from one of Mexico's most talented architects, Julio de la Pena, who, during his first visit to Palm Springs with the city's then-mayor, Frank Bogert, expressed his surprise at the fact that there were so few fountains in "one of the most beautiful cities in the United States."

His surprise was real. In Guadalajara, his native city, there is at least one elegant fountain in every park, and on many streets there is one on every corner. Many of the fountains were designed by Julio, who is also the master planner for the city and one of the closest friends of Francisca Medina Acencio, governor of Jalisco, the western-Mexico state of which Guadalajara is the capital.

Additionally, he was the architect for the Diane Theatre, San Juan Market, Monte Carlo Restaurant, Copa de Leche Restaurant, the Guadalajara Condominium and many other outstanding buildings in Jalisco. His most recent project is the new 14,000-seat convention and sports auditorium now being constructed on the outskirts of Guadalajara. One of his best-known fountains is the huge Diana fountain which every tourist sees as he enters the city on Vallarta Boulevard.

It was not surprising then, that on his second visit to the desert, in 1965, he expressed his feelings again and offered to design a fountain, "as a present from my country to your country.”

Frank Bogert, not being one to pass up a gift to his city, set the wheels in motion.

But while the fountain was conceived in love, its birth was not destined to be a simple one. Gestation was uneasy, and numerous midwives were involved in the ultimate delivery.

It started out well. Bogert, after several trips to Guadalajara, came home with complete plans, which included Julio's agreeing to have the components of the fountain cut from the native stone In Jalisco and shipped to Palm Springs. At this point, the total cost was to be around $10,000, which was Julio's estimate, based on what it would cost in Mexico.

Bogert took the plans to Ed Dillon, member of the Airport Commission, who immediately visualized the beauty of a fountain in front of the proposed air terminal, on McCallum Way.

Dillon and Bogert conferred with Pearl McCallum McManus, thinking she might donate the money to build the fountain, as a gift to the city she loved, at the end of the street which bears her father's name. Mrs. McManus agreed at once — but suggested a figure of $25,000 instead of the original $10,000, commenting that she had found that "everything one tries to build usually ends up costing double the estimate."

Dillon and Bogert then presented the idea to the airport commission and to the city council, who gave the go-ahead on the plan.

Donald Wexler, architect for the airport terminal building, and Dave Hamilton, the landscape architect, were consulted and were enthusiastic about Julio's design. After consultation with Julio, Wexler began to locate sub-contractors who could assemble the fountain, once the stones from Guadalajara had arrived.

Momentarily, the pretty bubble burst. No subs would bid on an unknown quantity, and none had ever built a fountain. T. "Pappy" Hubbs, president of Hoams Construction Company, offered to put in pumps, filtering system, lights and other equipment but shied from putting the fountain together.

All this had taken a year and a half. Now it was mid-summer of 1966. The airport terminal building was nearing completion. Word from Julio de la Pena said the stones were being cut in Jalisco. Still, no one could figure what the cost of construction would be.

Bogart and Dillon, with Wexler, again went to the council. They explained the costs might be more than Mrs. McManus's $25,000. Her agreement on the deal was that the completion of the fountain must be assured or the bank of America could not issue the check for $25,000.

The result of these meetings was that the city would guarantee the completion of the fountain and would budget as much as an additional $15,000 if needed. With the resolution passed, Public Works Director Tom Essen and Councilman Dragicevich were asked to fly with Del Canady, the airport director, to Guadalajara, to determine the size and weight of the stones and check shipping costs. They returned with flowing reports of the beauty of the potential fountain — but they found it would weigh more than forty tons rather than the ten tons previously planned.

Dragicevich was given the ball and came up with a trucking company that could haul the load across the border. Too, they could work out the customs problems. In a few days a truck out of Mexico City was loaded. A second truck ran into a slight problem. The fountain bowl wasn't completed.

The first truck took off sans papers and had to wait at the border in Morales until the other truck could arrive with the papers. The phone line between Dragicevich and Arrendadora de Transposes was hot. Two trucks were now tied up and waiting.

Again, a slight problem. The Rio Fuerte was flooding and the bridge was out. Dragicevich again burned the phone lines. He arranged for the truck to be loaded on a flat car and hauled for two days to Nogales. Then the waters went down, the truck forded, and the fountain rolled again.

When both trucks, the entire fountain, and its birth certificates had arrived in Nogales, everyone sighed and smiled.

The stones for the fountain are of volcanic origin. Volcanic rock is sometimes associated with gold. Mexican law says gold-bearing rock can't be exported except under special circumstances. An assay was called for, and the temporarily ill-fated fountain was delayed at the frontier while its temperature was taken.

But all’s well that ends well — or almost well. The beautiful stones arrived at last. Some were broken in transit and were replaced via another shipment from Mexico.

And then the total cost of installing the fountain went up from $40,000 to $55,000. The cost of purchasing the special rock and transporting it from Mexico was $2,912 above earlier estimates, and the construction cost is $12,088 higher than expected. Once again the city council came through with $15,000 in a four-to-one action opposed by Mayor McCoubrey.

Last word was that the fountain, which will be 65 feet in diameter and will gush 800 gallons a minute at the entrance to the airport's new $1.5 million terminal, is scheduled for completion in January by Press Construction Company of Palm Springs.

Julio De La Pena did not design the fountain to conform to the architectural styling of the airport terminal.

"The fountain is Mexican in flavor," he says. "It is supposed to be, so that people will see it as a symbol of friendship from Mexico."

Julio comes honestly by his talents. His grandfather, Jesus Lomelinni, also was a fine architect in Guadalajara. The family heritage, with that of other Latin American artists, includes artistic traditions that can be traced back to more than four thousand years in Mexico. From the famous Mayan culture, which left behind it monuments, palaces and cities — ruins that are favorably compared with those in Egypt and Indonesia — through the Spanish Colonial period of magnificent cathedrals and colorful baroque structures, to the vigor of contemporary architecture, ingenuity has been the keynote of a nation that has known three outstanding cultures and is, today, a charming blend of all three.

De la Pena's work is an individualized reflection of the Mexican modern architecture which is considered to be among the most daring in the world, with a dramatic and imaginative use of structural methods and materials.

Much of the material used is, of necessity, material at hand. For decades, Latin America has been compelled to sell or transfer its raw materials at frequently un-remunerative prices and to import relatively high-priced elements necessary to its industrialization. Proof that necessity is the mother invention is apparent in a use of materials indigenous to Mexico that has only increased the inventiveness of the nation's creative people.

When asked whether, like most artists, he has cherished a dream in terms of artistic endeavor, Julio answers, "Oh, yes. I did have a dream. I wanted to build a town. And I built one. I designed the entire town for a mining company — 500 houses, a civic center, a school, a hospital, two clubhouses, two hotels, plus all the industrial installations for the company. So now I have built the town. And now I will have to find a new dream."

Meanwhile, he can sleep nights, without the disturbing dreams of a desert city whose beautiful new air terminal is devoid of a grand fountain. Palm Springs, California, USA will have its fountain, thanks to Julio de la Pena, Guadalajara, Jalisco, Mexico —and the roster of mid-wives who have affectionately spanked it into existence.