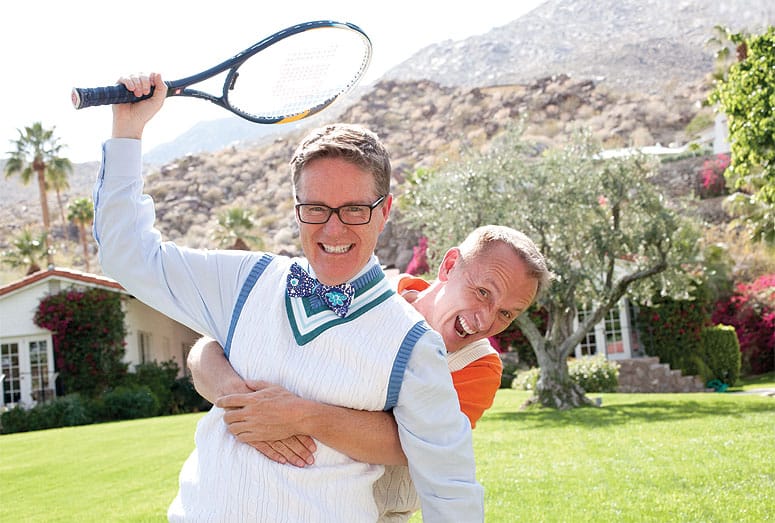 A bright-yellow smiley-face flag snaps with each gust of wind that blows through the yard of the idyllic Johnny Mercer estate in the Mesa neighborhood of South Palm Springs. “This is our happy place,” says Bob Hayes, as he sets down a tray of beverages in the pavilion that he and his partner, Jim Burba, built next to the tennis court that Ginger Mercer had commissioned for the 1.25-acre property. “We love being out here.”

The Laguna Beach-based couple started exploring Palm Springs neighborhoods while visiting the area in 1999. However, they bought a house in Santa Fe, N.M., and waited until 2006 to reconsider Palm Springs.

“I wanted an escape home,” Hayes says. “I fell in love with the environment and clean air and the lightness of Palm Springs. We have friends who live out here. People seem lighter; they come out here to relax and have fun.”

Buying a weekend house in the desert gave Burba and Hayes great pleasure, but acquiring the Mercer estate, in particular, proved a bittersweet experience.

“I fell in love with a different house in the Movie Colony that had been on the market for two years,” Hayes says. “But Jim was dragging his feet. And then it was sold.”

“It was a cute house,” Burba concedes. “Bob had that sad puppy look on his face. It was a loss. It hurt me, too. Then I stepped into high gear.”

“I loved Johnny Mercer’s music, and I love this setting,” Hayes says, noting the next house on the block is the iconic Streamline Moderne-style Ship of the Desert, owned by Palm Springs power couple Trina Turk and Jonathan Skow. “We like smaller houses on bigger properties. This is a triple lot. We built the [tennis] pavilion. It’s the perfect place to look back at the mountains.”

Burba adds, “We spend more time out here than any other part of the house.”

The 2,500-square-foot, three-bedroom, three-bathroom ranch-style house, built for Mercer in the 1920s, includes the studio where, according to lore, the composer wrote “Moon River.” The property also has original jacaranda and olive trees and a pool with diving board. Burba and Hayes are the third owners of the house since the Mercers.

The story of how Burba, 59, and Hayes, 55, arrived at this sweet spot in Palm Springs’ Canyon Corridor is at once prodigious, entrepreneurial, and brightened by a philanthropic spirit that makes them a perfect fit for the town.

They’re doing more than fitting in; they’re standing out for the way they run their business — and inspire others to run theirs.

Burba and Hayes, co-founders of Burba Hotel Network, produce conferences around the world for the hotel and tourism investment community. But they are gaining notoriety for their philosophy of “shared success” with their corporate partners and for showing other couples, straight and gay, how to go the distance as business partners.

“We approach business differently than most, and it has worked,” Burba says. “Our product is connectivity, and we don’t think it stops there.”

Featured in Inc. and listed among Out magazine’s “15 Power Couples You Should Know” — which also included Neil Patrick Harris and David Burtka, Tom Ford and Richard Buckley, Elton John and David Furnish, and Ellen DeGeneres and Portia de Rossi — Burba and Hayes have emerged as the go-to duo for advice on how to live, work, and thrive together. Trade magazines such as Successful Meetings and California Meetings have profiled the couple, and The Advocate has enlisted them to co-write commentaries.

“We can step back and look at what we’ve done,” Hayes continues. “We talk about how we do what we do and share the knowledge and experience so it might help others along the way. We like going out of our way to help other people.

“When we started working on a book, we needed a platform,” Hayes says. “No one outside our business knew who we were. We pushed out because we had a story to tell. People became interested in our story. They understand because they can relate to it through their own life. The gay issue is especially timely.”

“We believe in getting involved in the communities where we live,” Hayes says, pointing out their support for Laguna Art Museum and Santa Fe Opera.

They also give generously at the office. Burba Hotel Network — through its conferences that draw brokers, lenders, developers, and others in the hospitality industry — leverages years of relationships to raise money for humanitarian aid and hotel industry scholarships, research, and educational product development.

Last year, the company became a sponsor of Youth Career Initiative, an International Tourism Partnership program that launched in India to place disadvantaged youth in hotel jobs that teach them life and work skills. In its first year, 35 young people graduated from the program and landed jobs within only a few days. “It’s transformational,” Hayes says. “It changes families’ lives and breaks the cycle of poverty.”

Burba and Hayes also led the hotel industry into Stand Up to Cancer, Habitat for Humanity, and other charitable organizations. Since 2000, Burba Hotel Network events have raised more than $9 million for charities and educational causes.

The company has a conference this month in Hong Kong and dates set in 2014 for India and Singapore, as well as destinations in the Caribbean and Latin America.

The growing audience for the thoughts and ideas of Burba and Hayes follows the duo at burbahayes.com and on social media. Their website includes the “Out and About” blog, which hints to the respect they command in business (one photo shows them posing with Simon Hobbs of CNBC’s Squawk on the Street at the Americas Lodging Investment Summit in Los Angeles), as well as their fun-loving spirit — other photos show them with Matthew Morrison of Glee and Jesse Tyler Ferguson of Modern Family at the Steve Chase Humanitarian Awards.

Prior to the Steve Chase event, Burba and Hayes hosted a reception with Lorna Luft at the Mercer house. “We’re both fans of Judy Garland,” Hayes says, noting that she had an affair with Mercer. “I knew Johnny wrote the song ‘Lorna,’ so the song stuck out in my mind.

“We went to a [Human Rights Campaign] fundraiser, and I won lunch with Lorna in a raffle for $40,” he continues. “At lunch we talked about Johnny Mercer. She hadn’t been to the house. Her mother and Mercer had a relationship. We got her over here a couple of years ago, and she was mesmerized by the house. She’s been back a few times, including for the Steve Chase cocktail party. She told movie stories, Broadway show stories, and Mercer stories.

“Hollywood has come back to the house!”

Johnny Mercer (1909-1976), a Georgia native, began writing songs at the age of 15 and eventually became one of the foremost figures of 20th century American popular music. For nearly five decades, Mercer had a prolific career as a lyricist, composer, and performer. He is credited with writing 1,400 songs, was nominated for 18 Academy Awards, and was one of the founders of Capitol Records.