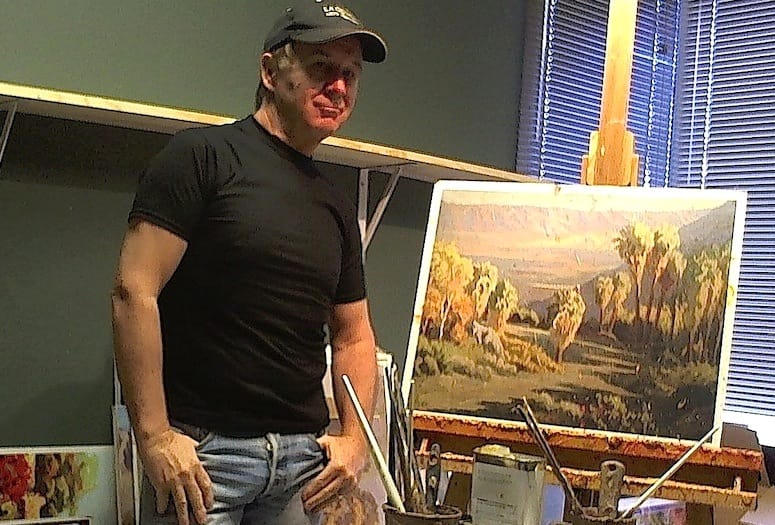 When artist Robert Ferguson talks about his artistic vision, he’s not just being speaking figuratively.

He means it, literally.

“I do not use photos or slides…just my eyes,” says Ferguson. “I will create paintings on location or create a study in nature to bring back to my studio to develop more. I love all elements of nature. I love the smell…snow and rain.  I once painted in Venice in the rain and I loved it!”

Ferguson, whose studio is located in Escondido, will be a featured artist at the prestigious 32nd annual La Quinta Arts Festival, March 6-9.

Art Fair Sourcebook ranks the La Quinta Arts Festival as the No. 1 Fine Art Festival in the country. Ferguson will not only showcase his talent but also serve as one of the panel judges. He says this particular show is “intense”, and he will load and unload approximately 2,000 pounds of artwork and material in one day.

Out of the Crayon Box

Ferguson work captures nature’s images he creates with his own eyes and tools. He is a “plein air” artist, painting on location with very large canvases.  His artwork lends to landscapes and scenery that is very popular with his patrons, selling more than 2,000 paintings in the past 15 years.

Raised in Las Vegas, Nev., a far cry from what would be perceived as natural surroundings, Ferguson says he grew up surrounded by country western singers. His parents were small business owners in the hospitality industry.

“Roy Clark, would babysit me and my sister in exchange for room and board,” he recalls. “Roy would drive up in his Cadillac and there were guns and silver dollars welded onto his car. I would run and try to pull them off.”

When asked how this lively upbringing translates into his current natural art aesthetic, he says, laughing, “I know from artificial heaven (referring to Las Vegas) to my love of nature, my life has been extreme.”

The Urban Outdoors
Ferguson was formally trained as an artist at the Parsons School of Design in New York, another urban outpost that is a night and day contrast to the likes of camping at Lake Cahuilla in the desert.