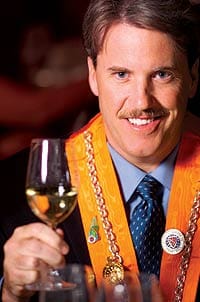 Five times a year, a large group of valley residents don purple, red, green, blue, and gold ribbons and embark on a night of fine dining. Covered with chains, medallions, and pins, the ribbons designate the wearer’s rank in an organization that dates back to the 1200s.

Chaîne des Rôtisseurs’ history begins with the French guild of goose roasters, or rotisseurs, who prepared the meat for all noble tables. King Louis XII granted the guild a coat of arms, and it held sway until being abolished during the French Revolution. One hundred sixty years later, three friends dining together in Paris — inspired by a perfectly spit-roasted leg of lamb — revived Chaîne des Rôtisseurs to celebrate the pleasures of the table and encourage the development of young professional chefs and sommeliers. A society within a society, L’Ordre Mondial des Gourmets Dégustateurs organizes special events — including trips to wine-producing regions — for epicureans with a special knowledge or interest in wine and spirits.

Now an international organization, Chaîne des Rôtisseurs boasts 24,000 members, including people like Martin and Annette Rakowitz of La Quinta. The organization affords them ready-made contacts when they travel.

“We go from city to city and call the bailli or one of the officers of the baillage and ask what’s going on in town — do they recommend any specific restaurants?” Annette Rakowitz says. “Some of the restaurants are members, and they usually show us a little bit more attention.” (True to its French origins, Chaîne des Rôtisseurs refers to each club as a baillage and the head of each club as the bailli.)

The Palm Springs baillage began in 1981. Though about half its 50 members are chefs, restaurateurs, or in other culinary-related professions, such an affiliation is not requisite. Members must simply enjoy fine food, wine, and camaraderie — and be invited to join.

This season, the local club dined at The Rattlesnake at Trump 29 Casino, Roy’s, Cuistot (where it held its black-tie induction dinner), Omri & Boni, and Thunderbird Country Club.

Philippe Caupain, executive chef at Thunderbird and a 10-year Chaîne member, hosted the food and wine aficionados most recently. “There are so many things you can do,” he says. “We have a good budget, so we can create something nice and use expensive ingredients.” For the April dinner, he ordered a special Sonoma duck for 55 diners.

It’s not entirely about caviar-and-champagne-style dinners, however. It’s also about encouraging aspiring chefs and sommeliers at culinary institutes and colleges. The Chaîne Foundation has raised and awarded more than $1.2 million in scholarships in the last seven years.

Chaîne’s Jeune Commis (young chefs) Competition further promotes culinary excellence. The Rakowitzes attended the regional competition at Santa Barbara College Culinary School in March. Competitors, who must be 27 years old or younger and have a maximum of five years of kitchen experience, receive a mystery basket. They have 30 minutes to write a three-course menu and 2 1/2 hours to prepare a three-course meal using all the ingredients in the basket. In Santa Barbara, the basket contained scallops, live crab, sea urchin, rabbit, and vegetables.

“There were six chefs and six completely different menus,” says Annette, who said watching the flurry of activity was “one of the most enjoyable experiences” — even though she didn’t get to taste the results.