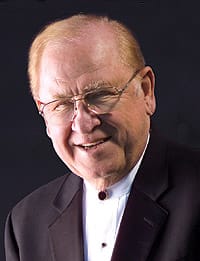 The nature of secrets is such that some of the very best things in the world remain lost to those who might most benefit from their knowledge — so it’s to no one’s favor that Indian Wells Desert Symphony remains one of the desert’s best kept. Even after 15 years of distinguished service, chairman and conductor Edwin R. Benachowski sees a vast wealth of opportunities to bring music to the ears of a community long on intrinsic beauty but often woefully short in cultural programs.

Since taking the helm in 1989, Benachowski, 80, and his wife Marilyn, the symphony’s contractor and co-concertmaster, have advanced an agenda of diverse and rich programming through a rigorous and varied lineup of musicians and performers. For this season — the 15th anniversary — the Benachowskis collected broad headline talent, including Grammy Award-winning singer (and official symphony spokesperson) Jack Jones, violinist Jennifer Frautschi, jazz clarinet impresario Eddie Daniels, soprano Lori Stinson, and in a stroke of fusion that marks the symphony’s eclectic mix, Mariachi Sol de Mexico led by Jose Hernandez.

It’s a five-star lineup, certainly, but it hasn’t always been so easy for the Indian Wells Desert Symphony — especially before it took permanent residence at McCallum Theatre in Palm Desert. “We were homeless,” Benachowski says of the early years, when the symphony bounced from hotel to hotel, the quality of the performance more often gauged not by the expertise of the players — which culls from both the figurative and literal virtuoso talent found across the Southland — but by, well, the food. “We were more concerned about the meals than the show,” he says. “We knew the show would be good — but, my goodness, if the food was bad we heard about it!”

While it may be hard to imagine a vagabond group of ragtag musicians carrying wind instruments across the valley, the perception alone that the symphony didn’t have established roots has long fed into the secret quality of the troupe — a quality the Benachowskis have also tried to assuage by attacking misconceptions about who and what a maestro should be, and in the process challenging what one might expect from an evening at the symphony.

In a pragmatic sense, Benachowski is indeed the very essence of a maestro: educated at Julliard and Columbia University; a performance history seasoned with names like Gene Autry, Pat Buttram, Henry Mancini, and Frank Sinatra; a phalanx of protégés who’ve gone on to their own widespread success; a tall and graceful physique that looks smart in a tuxedo, narrow baton clutched lightly in hand. But in person, he is quick with a story, quicker still to laugh (often at himself), and blessed with the personality of a talk-show host. It is this mixture that brought about a most unnatural turn, but one that has become a fixture with the symphony: Maestro Benachowski talks to the audience.

“Part of our mission statement is that music should bring communities together,” he says of his pioneering decision to make performances interactive. “I would perform Mozart’s Movement 39, which is a tough piece, and wonder, ‘What’s the solution to connect with the audience?’ And it was to have them take part.” What Benachowski did was break his audience into thirds, with each third giving a pneumonic response to Mozart’s notes, creating an ad-hoc chorus of voices singing, “In the middle of a book/Uh-Oh/Digga-digga-digga-dig,” which ends up being the whole theme of the 39th movement.

Since then, he has ensured that each concertgoer feels a personal connection with the music. It’s a part of the symphony experience that for a long time has been neglected, says Marilyn Benachowski. “In the old days, music was played in people’s homes, in salons — it was an intimate relationship with the music,” she says. “Where the stuffiness came from, I just don’t know. Everyone now knows the caricature of the conductor with his back turned to the audience, his hands out, his hair messed, but it wasn’t always like that. And it shouldn’t be.”

Part of the challenge the Indian Wells Desert Symphony faces, then, is still largely about awareness. As Palm Springs Valley grows and demographics skew younger than ever before, the Benachowskis see a dearth in the field of music education and appreciation, which means a wealth of their potential audience must be cultivated.  Through its Children’s Music Discovery Series, the symphony conducts performances especially geared toward fostering music education in young, often underprivileged children valleywide. For some, it is their very first up-close-and-personal interaction with a musical instrument. For others, it may be their only immersion in the arts whatsoever.

“It is a musical happening,” Benachowski says, “and it’s often also a miracle. There will be 1,100 children in an auditorium and I swear you’d be able to hear a pin drop. I greet them, I make them feel comfortable, I talk to them, and I put on programs for them that they can understand, with musicians often from their own age group. And they respond beautifully.”

The tragedy is that more children aren’t yet taking part — Benachowski estimates that the program reaches only 5 percent of local children, a funding issue that remains one of the symphony’s top concerns.

As the lone local symphony, Indian Wells Desert Symphony holds a key to a not-so-distant past when entire cities flocked to the halls of music for both entertainment and education — a conceit that might be difficult to imagine for a new generation raised via on-demand arts pumped directly into the privacy of their home computers. Nevertheless, for 15 years and hopefully many more, the Indian Wells Desert Symphony has held one thing true in both spirit and practice: “Music can change and inspire people,” Benachowski says. And that, certainly, is no secret.