In the series Dogs Chasing My Car in the Desert, artist John Divola shot out of the window of his moving truck with a 35-mm camera while running canines kept pace.
PHOTOS BY JOHN DIVOLA/COURTESY GALLERY LUISOTTI

The sun lingered long enough on the High Desert horizon for John Divola to race across the barren landscape and photograph a green- and yellow-painted jackrabbit homestead cabin in Wonder Valley.

As he closed in, signs of life came into view: a blue Suzuki Samurai parked along the side, two rusted lawn chairs outside the front door, and an improbable power line stretching from a faraway source to the top of the tiny dwelling. Rocks and boulders framed the unpaved driveway, and three dogs in a fenced-in pen barked at anything that drew near. The blinds on the windows were open, and when Divola stepped out of his pickup truck he could hear a television on inside.

“A man came out and asked what I was doing,” says Divola, an artist and University of California, Riverside, art professor who has been prodding and photographing Southern California environments since the early 1970s. “I said, ‘I’m taking a picture of your house. It’s extraordinary.’

“He grunted and went back inside.”

Divola continued shooting. With cotton candy–pink clouds illuminating the sky, he captured one of the most memorable images of Isolated Houses, a series he created here between 1996 and 1998.

He grew interested in the one-bedroom shacks while working on Four Landscapes, a previous series consisting of grainy black-and-white photographs of Southern California’s desert, mountains, city, and sea — and traces of people running into nature. 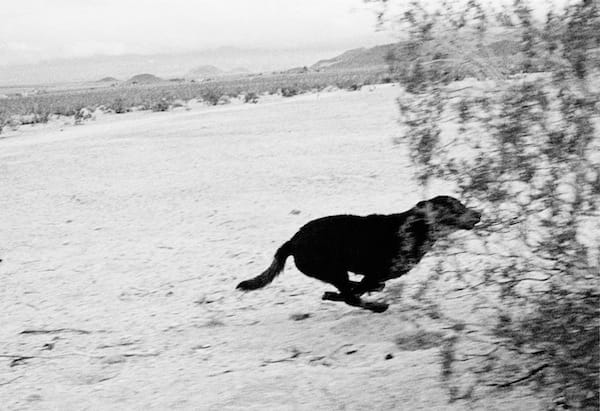 “I was seduced by the light and started this series of these arbitrarily dispersed jackrabbit houses,” he recently told Desert X symposium participants in Palm Springs. “There’s this notion of the melancholic, like in all of my work, but my interest was existential — the cube on this seemingly infinite desert landscape — and in creating iconographies of desire, to be alone or go ‘outside’ or ‘beyond.’ It was by far the most enjoyable body of work I’ve done. Imagine the beautiful days driving in the desert and encountering these structures.”

Divola began his symposium presentation with an apology: He couldn’t stay for the Q&A at the end of the program because he had to catch a flight. He never revealed he was en route to New York, where he would attend the opening of the Whitney Biennial. The critically acclaimed exhibition includes a selection of Divola’s 2007–2008 Abandoned Paintings, photographs of student art he rescued from a UC Riverside dumpster and hung in abandoned buildings.

He says, “Paintings and sculpture are made to be framed and photographed and recontextualized,” a philosophy reflected in his own collection of Hollywood film stills that studios used to ensure continuity. “I’m interested in the artificiality,” he says of the images. “Eventually I started noticing categories [of photos]: chairs and empty hallways, for example.”

Divola describes “moving through the landscape looking for evidence of existential desire.” 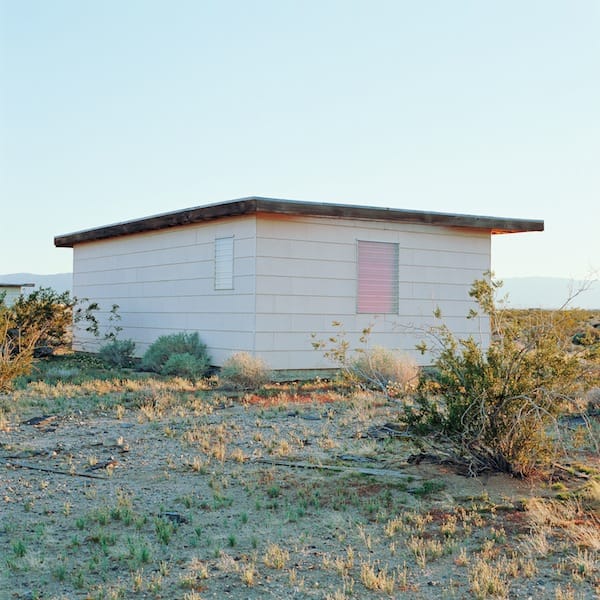 The intervention on abandoned buildings harks to the artist’s 1979 Zuma and 2007–2008 Dark Star series. Both feature his own crudely spray-painted marks and symbols on walls of abandoned structures.

Divola, a native Californian who earned his Master of Fine Arts at UCLA in 1973 under the cutting-edge “paraphotographer” Robert Heinecken, has always favored a conceptual and indexical approach to making art. His works are singular ideas presented in series. He’s interested in “time, place, and circumstance.” The Zuma photographs document fire, vandalism, and the artist’s own graffiti on a beachfront property over two years. In As Far As I Could Get, Divola runs as fast as he can from the camera after setting the timer for 10 seconds. And in the book project The Green of This Notebook, he juxtaposes photographs with pages from Jean-Paul Sartre’s seminal 1943 Being and Nothingness. Sartre illustrated the abstract nature of being with experiential examples, and Divola highlighted one on each page and paired it with an image that translates the metaphor on the facing page. In one he highlighted the phrase “ ‘I see yellow’ because I have jaundice or because I am wearing yellow glasses.” On the facing page he placed a gold-tinted photograph of a road cutting through a desert landscape.

The breadth of Divola’s oeuvre crystallized in 2013 when three museums — LACMA, Pomona College Museum of Art, and Santa Barbara Museum of Art — mounted simultaneous exhibitions, creating a collaborative survey under a single title, As Far As I Could Get. It included his latest ongoing series, Theodore Street, and his new mural-size photographs he created with a robotic camera mount called a Gigapan. Developed for the Mars Rover, the technology scans a scene with a telescopic lens and makes overlapping exposures. He explains, “For each Gigapan image there are up to 120 images made over a 15- to 20-minute period. Software stitches them into one view.” He deployed the camera at George Air Force Base, Wonder Valley, and Landers, as well as in Moreno Valley for Theodore Street.

Palm Springs Art Museum recently added one of Divola’s 10-foot-long photographic prints to its permanent collection. His work has appeared in several exhibitions at the museum. Three Zuma photographs were in the 2012 exhibition Backyard Oasis: The Swimming Pool in Southern California Photography, 1945–1982,, and a selection from Isolated Houses and Dogs Chasing My Car in the Desert was in Contemporary Desert Photography: The Other Side of Paradise in 2005.

Divola was living in Venice in the 1980s when he started driving to Twentynine Palms and Wonder Valley. He appreciated the deep horizons, the quality of light, and the way sound moved on the landscape.

The diminutive cabins appeared on the terrain shortly after World War II, when building materials became available and the Small Tract Act of 1938 made up to 5 acres of “useless” federal land available to any U.S. citizen who would build a home or business on it. 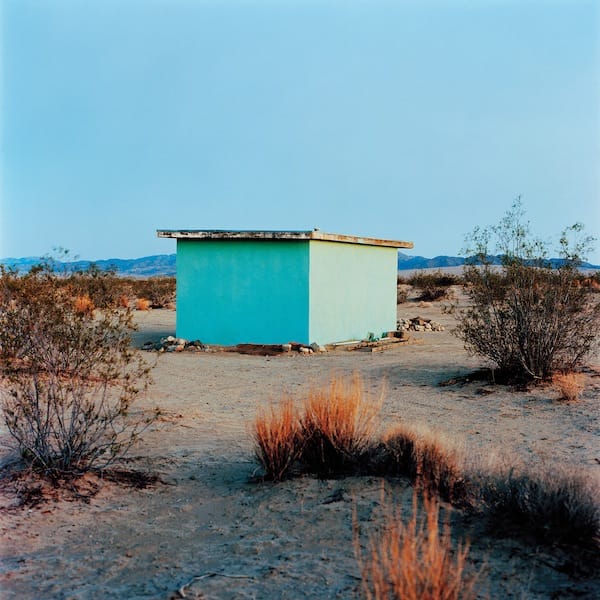 “This parallel economic universe rose for the non-elite working class,” Divola says. Some of the properties passed to younger generations, but “most were abandoned and fell into disrepair.” Others crumbled to the ground, instigating a later series of photographs, Collapsed Structures. “I’m interested in their sculptural qualities.”

First, he spun off Dogs Chasing My Car in the Desert, photographs he took from a moving pickup truck using a motorized 35-mm camera and high-speed black-and-white film. “I had one hand on the steering wheel and held the camera out the window,” he says.

Most sublime are the Isolated Houses under big, lush skies with mountains in the distance. Divola describes “moving through the landscape looking for evidence of existential desire” to escape, decompress, and bathe in the quietude of solitude. It manifests in pink, white, and mint-green houses and stirs endless curiosity: Who lived in these dwellings and what occupies them now?

The desert is a place of extremes. And the people who inhabit it are quirky. When Divola returned to the “extraordinary” green- and yellow-painted cabin two weeks later, he found the cranky owner had repainted it white.