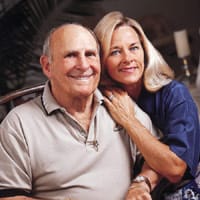 Ethan Kaminsky
The quintessential director of I Love Lucy, the wizard of Bewitched, Gidget‘s Big Kahuna, the principal ingredient in Our Miss Brooks and the brains behind hundreds TV comedy episodes takes a breather in La Quinta.

It is often said, many times in a clichéd manner, that a difficult childhood with lessons well-learned leads to a successful adulthood. Cliché or not, such was the case with phenomenally successful William Asher. Whatever rotten times colored his boyhood experience, something must have given him the insight and direction to exceed his parents’ dreams and circumstance.

Asher came from the sort of rough and tumble family immersed in the world of vaudeville, silent films and early talking pictures, where his father Ephriam Asher was an associate producer, and his mother Lillian worked as a clerical assistant at the MGM Studios. The senior Asher died when William was 11.

After his father’s death, the excitement of a life in the new and daring film industry was replaced by the bottle for a Catholic mother whose Jewish associate producer-husband had died young, leaving her the burden of rearing children during The Depression. Young William would eventually enlist in the Army, lying about his age and forging his mother’s consent, when he was 15.

But show business was in his blood, apparently. Asher got out of the service after a few years, never being sent overseas during World War II (a fact that he says probably saved his life because he just couldn’t take orders very well and often ended up in fights) and headed for Hollywood to get a job in the motion picture business.

“I went to some guys my dad knew for help,” he remembers today. “They slammed the door in my face.” He ended up leaving Hollywood and moving down to the Salton Sea area east of Palm Springs where rent was cheap and life was pretty basic. There, “I just stared writing short stories for magazines.” It was something he knew how to do; he had written stories while he was in the Army and had sold them to various magazines. The stories still sold. Soon he was writing for short films. Five-minute reels that were used as interstitial filler in theaters and on a fledgling medium called television. Then came a call from this network called CBS. They’d seen Asher’s work and they were looking for directors.

“What did a television director do?” Asher asked. This was new and uncharted territory. Within six weeks, he was back in Hollywood directing a “pilot” for a television “series,” featuring the movie actress Eve Arden. The show would become Our Miss Brooks.

On the sound stage next to Arden’s new program’s set was another show just in its infancy. This one was about a young married couple – the husband was a Cuban bandleader and the wife was a dizzy-like-a-fox showbiz-crazed redhead – and it was having trouble. The network was all over the creators and the survival of the show was in question. It is well documented today in TV history that Desi Arnaz and Lucille Ball stood their ground against all odds to preserve the honesty of their show, and in so doing turned the production into a dynasty. One of their moves was to hire young William Asher from next door to direct. “Desi called me in from Our Miss Brooks,” Asher recalls. “He wanted to try me out for a couple of episodes.” The year was 1952. By the end of the season the show had survived and was picked up for another year. Asher was asked to direct the series at a salary of $500 per episode. “In those days if you were making $200 a month, you were doing well,” Bill says. “I was in my mid-twenties, unmarried, working on Our Miss Brooks and I Love Lucy, making $1,000 a week from both shows combined. I lived like a drunken sailor!” He pauses. “You can believe I spent the money.”

He also learned the ropes. Delivering quality television, Asher became one of the early wunderkind of TV-land, blazing a path in the new medium that was the technological wonder of its day. Doors that may have been closed to his father and to him a few years earlier, were now wide open. Asher would eventually become involved with all of the great talents of the Golden Age of the tiny tube: Danny Thomas, for whom he directed the first 10 episodes of Make Room For Daddy; Sheldon Leonard, Dinah Shore (Asher won an Emmy in 1959 for directing her show); Sally Field (Asher directed the pilot of Gidget and launched the series). Others with whom he collaborated include Sidney Sheldon, Dick Van His glory days in the 1960s and ’70s featured his then-wife Elizabeth Montgomery’s catching the attention of the nation portraying a gorgeous and charming witch on Asher’s creation Bewitched.

And there was more: heady days hobnobbing with President John F. Kennedy and his entertainment counsel Frank Sinatra, planning Kennedy’s 1961 Inaugural. Those years also saw Asher’s marrying Montgomery in 1963 and siring three children. After their amicable divorce in 1973, he then married twice more, once to actress Joyce Bulifant and now to Meredith, a desert resident whom he met when he retired. What Asher has truly accomplished is the art of living on his terms in a creative whirlwind. He has survived and, moreover, he has achieved great success. Many of his ideas in TV comedy live on.

Look through these mementos. The achievements speak for themselves.

This personal shot of Lucille Ball holding her son Desi Arnaz, Jr. is signed by Ball especially for Asher, the original and longtime director of the TV legend I Love Lucy. “For Sweet William.a thing of beauty is a joy forever. Love, Lucy.” Today Asher says, “Lucy was a great talent and a great lady. And she worked. Worked for perfection in all she did.” Elizabeth Montgomery had survived two failed marriages before meeting and falling in love with Asher on his movie set of Johnny Cool in 1960. Their collaboration on and off-screen was a winner for a number of years. “The early years were magic,” Asher recalls. “Elizabeth actually typed the rewrite of the scripts for producer Sol Saks that would become Bewitched.” The original show, as conceived by Asher, was to be much darker and menacing, meant as a vehicle for Broadway actress Tammy Grimes. Miss Montgomery succumbed to cancer in 1995.

Peter Lawford, Kennedy’s brother-in-law, married to Kennedy’s sister Pat, was the executive producer of Asher’s 1960 Johnny Cool for UA. Asher would not only meet his future wife Montgomery on this film, he would also be introduced to The Rat Pack through Lawford. The relationship led Asher to Washington to direct the Kennedy Inaugural. “Lawford was a good guy,” Asher remembers. “Marilyn was a wonderful woman. She really cared about people. She also cared about the work. All she really wanted to do was be the best actress she could be.” And Jackie Kennedy? “Jackie Kennedy didn’t like many in the Hollywood crowd but she liked me. Actually she barely tolerated anybody else.” Lucy and Elizabeth were not the only actresses Asher’s talent would elevate into the public spotlight. Asher developed the Gidget pilot for Sally Field. It was a natural for him as he loved the ocean and surfing, evident in his Hollywood movie output – films like How To Stuff a Wild Bikini.

“The scenes that made audiences howl with Lucy were taken from life. The writers, myself and Lucy and Desi worked to create the most honest moment for the character America would love. Lucy was natural. Her instincts were very sharp. Many times the scenes would be filmed in just one long take. But if they weren’t right, we would do them for as long as it took to make it right.”

Asher directed, wrote and/or produced Beach Party, How To Stuff a Wild Bikini, Muscle Beach Party, Beach Blanket Bingo and Bikini Beach. His formula was simple: Blondes, bodies and beach, with a silly plot twist or two to keep the audience guessing. Following his divorce from Joyce Bulifant after 17 years of marriage, Asher moved to La Quinta from LA. “I wanted to be in the desert and it was time,” he says. Several years ago Asher met Meredith, also divorced, and the pair hit it off instantly. Now they share a combined life filled with family on both sides. “He’s a great man and I want the world to know just how talented and incredible my husband is,” Meredith says.