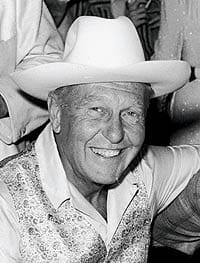 Two actors without a place to play tennis decided to build their own court, starting a chain of events that would cement Palm Springs’ reputation as Hollywood’s desert playground. One man would go on to become one of the city’s leading socialites and celebrity icons and eventually its mayor, commemorated with a bronze likeness at the airport.

This article is about the other one.

Ralph Rexford Bellamy, born 114 years ago on June 17, didn’t live here as long or have as high a profile as his friend Charlie Farrell, but he left an indelible impression. That he moved on while Farrell became the toast of the town somehow suits the dedicated actor who appeared in more than 100 films in a variety of roles, but who is best remembered as the man who doesn’t get the girl.

A Star Is Born

The Chicago-born Bellamy arrived in Hollywood not as a budding young star, but as a star-struck tourist. After paying 25 cents to get into Universal Studios, he snapped a picture of someone he thought was silent-film star Dustin Farnum, only to learn he was the animal keeper.

On a return visit in 1919, young Ralph took a job as a bellboy and was privileged to polish the shoes of the aptly named actress Louise Lovely. He mentioned that he wanted to be an actor, and she arranged for him to appear in her Wings of the Morning, a shipwreck story filmed on location in Newport Beach. He made his screen debut as a cabin boy, delivering a message to another of the famous Farnum brothers, William. Bellamy earned $5 for one day’s work.

Back in Illinois, he became president of his high school drama club, but his term came to an end — along with his formal education — after he was caught smoking once too often. Undaunted, he phoned a theatrical producer in Chicago and bluffed his way into a road-show production of the Ozark melodrama The Shepherd of the Hills playing the father of the hero, portrayed by an actor 10 years his senior.

Several jobs followed, including a position as supporting player and stage manager with a stock company in Madison, Wis. His $45-a-week salary enabled him to go halves on a car with the troupe’s debonair leading man, Melvyn Douglas. They regularly drove their Model T Ford to the edge of town and bought bootleg wine for 50 cents a pint.

Bellamy took charge of his own career in 1926 with the formation of the Ralph Bellamy Players, a stock company that lasted two seasons in Des Moines, Iowa, and two in Nashville, Tenn., before its leading man succumbed to Broadway fever. The ambitious young actor moved to the Big Apple in 1930 and appeared in two plays. Neither was a success, but Bellamy attracted the attention of talent scouts in desperate need of good-looking men who could learn and speak lines for the nascent talking-picture industry.

Bellamy debuted in talkies as a vicious gangster in The Secret Six, which featured major star Wallace Beery and relative newcomers Clark Gable and Jean Harlow.

During the next few years, Bellamy appeared in tough-guy roles with some of the era’s top draws, throwing punches at Pat O’Brien and Jimmy Cagney. Later, these three, along with Spencer Tracy and others, would form an informal association they called the Boy’s Club, also known as the Irish Mafia. But that wouldn’t be the most famous club in which Bellamy played a part.

Ralph Bellamy and Charlie Farrell made only one film together in their long careers — the largely forgotten 1932 Western Wild Girl — but their names belong together in our valley’s history.

By 1933, Bellamy had enjoyed enough Hollywood success to seek an escape from it. He found it in the sleepy desert village of Palm Springs, as had Farrell before him. Here, the two actors discovered they shared a passion for tennis. Unfortunately, as Bellamy later told the story, the town had only two tennis courts and one of them was cracked. He and Farrell would hop the fence to play all day at El Mirador, until the owner politely asked them to stay away and give paying guests a chance.

The players resolved to build their own court on part of a 53-acre parcel they had purchased for $3,500. During construction, they decided to add another court and a sheltered observation area. After adding a swimming pool, lockers, and shower facilities, Bellamy suffered buyer’s remorse. They had invested $78,000 on an occasional hobby. He told Farrell they had to come up with a way to make some of it back.

So began the legendary Racquet Club. Out of 173 people originally invited to join, four ponied up the $50 initiation fee: Frank Morgan, who went on to play the title character in The Wizard of Oz; Charles Butterworth, a specialist in comic milquetoast roles; British actor Reginald Owen; and Paul Lukas, later to win an Oscar for his leading role in Watch on the Rhine.

The partners discovered if they raised the fee, more people would join. Soon they charged $650 a head and had more members than they could accommodate at one time. They added a bar trimmed in bamboo and red leather and a dining room with a dance floor. Rudy Vallee and his orchestra entertained on Saturday nights. Club pros included prominent players of the time such as Keith Gledhill and Alice Marble, but Bellamy still kept an eye on expenses. The used stove in the kitchen cost $25. The bar featured a $400 clock, but only because gossip columnist Louella Parsons took up a collection for it.

Farrell went to make films in England for a couple of years, and Bellamy became the manager of the club. He wasn’t comfortable turning away friends who wanted to join or collecting payment from guests who couldn’t remember how much champagne they had consumed the night before. On Farrell’s return, Bellamy sold him his interest. The Racquet Club continued as a playground of the rich and famous for many years, helping to draw the world’s attention to Palm Springs. Bellamy, meanwhile, would find greater fame in Hollywood and New York.

Road to the Presidency

A 1937 screwball comedy largely defined Bellamy’s movie career. He appeared as Irene Dunne’s suitor in a role originally tailored for British actor Roland Young, but given to Bellamy to play as a comically uncouth Oklahoma oilman, hopelessly out of his element and no match for the suave and sophisticated Cary Grant. Largely improvised and filmed in only six weeks, The Awful Truth became a hit, helped define Bellamy’s career, and earned him his only Academy Award nomination for acting.

After losing Ginger Rogers in Carefree and Carole Lombard in Fools for Scandal, Bellamy faced Grant a second time in the His Girl Friday, this time in a part originally written for a woman. The 1940 comedy classic began life as the second screen version of The Front Page, a stage play about newsmen. When one of those men became Rosalind Russell, Bellamy became her likable but hopelessly outclassed fiancé. Grant’s character dismissively describes him as looking “like that fella in the movies — you know, Ralph Bellamy.”

That fella had appeared in roles ranging from a German POW camp officer to a doctor struggling to cure a deadly fever, but now he was typecast. One day, in a studio executive’s office, he saw a casting note that read, “A charming but naïve fellow from the Southwest. A typical Ralph Bellamy part. ”

Although he continued making films, he looked to New York for more rewarding roles. In early 1943, Bellamy began a yearlong run in Tomorrow the World as an American professor trying to rehabilitate a young Nazi. He followed this up with the political comedy State of the Union. During that engagement, he met Ethel Smith, an organist who had a major hit with the Latin-flavored “Tico Tico.” A couple of years later, she became his third ex-wife.

In 1949, he found himself fighting crime on two fronts. By day, he was private eye Mike Barnett in Man Against Crime, one of the first weekly half-hour dramas on network television. By night, he was police detective Jim McLeod in the Broadway play Detective Story. On Friday evenings, he would ride from the broadcast studio to the theater in a speeding squad car with siren blaring. That same year, Bellamy wedded theatrical agent Alice Murphy. This union would last the rest of his life.

In the 1950s, he began a 12-year stretch as president of Actors Equity Association, appeared with Gary Cooper in The Court-Martial of Billy Mitchell, and received an Emmy nomination for his performance in the live television drama Fearful Decision, later remade as Ransom. But for Bellamy, the highlight of his career came when he won the chance to play a personal hero in the stage play Sunrise at Campobello, a depiction of Franklin Roosevelt’s struggle with polio.

Bellamy studied recordings of Roosevelt’s speeches, worked with paraplegics at the institution where FDR had learned to use his crutches and his braces, and met with members of the Roosevelt family. The play ran for a year and a half in New York, followed by a six-week engagement in Washington, a national tour, and a film version. Bellamy beat Richard Burton and Laurence Olivier for the 1958 Tony for best actor.

The following decades saw Bellamy appearing mostly on the small screen, as a guest star on numerous series, as a regular in a few short-lived programs, and in television movies, including Emmy-nominated turns in The Missiles of October and The Winds of War.

He did, however, make a few more films worth mentioning. In 1966, he had a pivotal role in The Professionals, a Western romp starring Lee Marvin and Burt Lancaster, with Jack Palance as his rival in romance. (If you wonder who gets the girl, you haven’t paid attention.) He played a sinister obstetrician in the horror classic Rosemary’s Baby (1968). In 1972, he appeared in Cancel My Reservation, notable only as the final film to star Palm Springs’ ultimate celebrity icon, Bob Hope.

Bellamy and Don Ameche portrayed scheming commodity traders in the Eddie Murphy/Dan Aykroyd hit Trading Places in 1983, the same year the Screen Actors Guild gave Bellamy its lifetime achievement award. In 1986, he received an honorary Oscar “for his unique artistry and his distinguished service to the profession of acting.” In his final role, Bellamy played a benevolent capitalist threatened by corporate raider Richard Gere in 1990’s Pretty Woman. He succumbed to a lung ailment in 1991.

If you stroll down the west side of Palm Canyon Drive between Tahquitz Canyon Way and Arenas Road this month and glimpse the star for former mayor Charlie Farrell, just turn your head slightly to one side to acknowledge his partner in putting us on the map.

No, not Ruby Keeler. The other side. That’s where you’ll see the star for Ralph Bellamy, Hollywood’s leading other man.