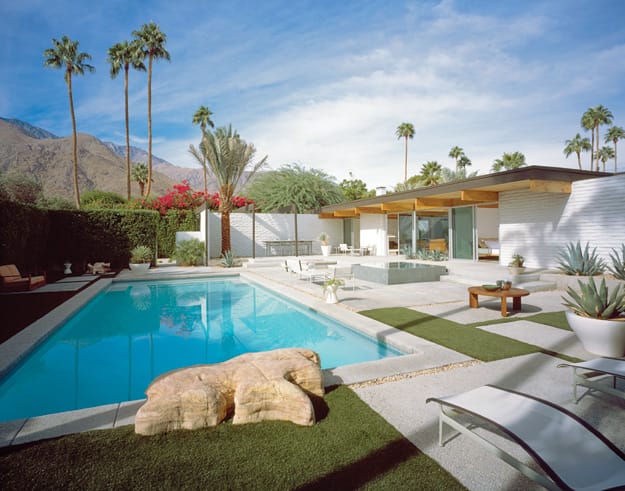 Like a magic doorway to the ’60s, a steel house designed by Donald Wexler greets visitors to Palm Springs Art Museum, where a retrospective on the 50-year career of the architect is on view (Donald Wexler: Steel and Shade, Jan. 29-May 29). The full-scale re-creation of the Alexander Steel Houses that Wexler designed four decades ago in north Palm Springs features the “folded” metal roof that is his most famous design motif. The reconstruction (the work of design students from Cal Poly) epitomizes the straightforward, no-nonsense work of Wexler: elegant, innovative, and acutely aware of climate.

Wexler is all about logic and efficiency. His buildings fit together tightly, like parts of a machine. Nothing seems out of place, and details rarely distract from the whole. His approach to building dates back several decades, when the elegance of architecture was supposed to be a byproduct of research and good thinking. He is as interested in building technology as a general contractor and as aware of cost as a developer.

“His designs are very integrated,” says Lauren Bricker, professor of architecture at Cal Poly Pomona and co-curator with Sidney Williams of the museum retrospective. Wexler, she adds, is “a very detailed-oriented person, so detail in his designs is very carefully thought out.”

He is emphatically an architect of the desert. With long overhangs and explicit references to sun angles, his buildings belong in the Coachella Valley, where he has spent virtually his entire career and where he chose to build almost all his projects. A visitor tells him that his buildings would evoke Palm Springs even if they were transposed to Antarctica. “I take that as a compliment,” says Wexler, now 85 and in delicate health.

“I try to work with the desert as much as possible,” he says. Deep eaves and overhangs help keep them cool and comfortable amid the relentless sun. His public buildings have shaded walkways — most notably, perhaps, is the one fronting the Spa Hotel in downtown Palm Springs that he designed with then-partner Rick Harrison in association with William Cody and Philip Koenig. To maximize natural light, roofs often tilt slightly to the north. Two exceptions (230 and 231 Lilliana Drive) tilt west toward a mountain view “because the hills provide shade in the afternoon,” Wexler explains.

Palm Springs modernists of the 1950s and ’60s “not only loved the desert environment, but [also] they solved the problems of designing in the desert long before those solutions were required by code,” Bricker says.

Perhaps Wexler’s legacy is all the more remarkable because of the constraints he set for himself: to remain a small office and build almost entirely in the Coachella Valley. After graduating from University of Minnesota in Minneapolis, following a Navy tour in World War II, he worked briefly in only two offices before opening his own with Rick Harrison.

He moved to Palm Springs in early 1953 to work with William Cody, a high-living socialite with solid design sense. The assignment was originally intended to last only half a year. Like many people, however, Wexler fell hard for the Coachella Valley as soon as he saw it. “After six months,” he recalls, “I didn’t want to live anywhere else.”

Raised and educated in Minneapolis, Wexler remains something of a self-effacing Midwesterner. As with many people who think in spaces rather than words, language seems almost a necessary evil to him. Take his pithy praise of one-time mentor, Austrian-born modernist Richard Neutra: “He had a sense of design and designed the details carefully,” Wexler says of his first employer. “He was just a good, all-around architect.” Keep in mind that Wexler venerates Neutra.

Wexler eschews architectural theory and other abstractions. “I never tried to do any kind of style,” he says disdainfully, as if declining to try on a clown suit. He claims not to know whether he is a modernist, a practitioner of the International Style, and other pundit-created labels. But that doesn’t mean he’s wishy-washy about design values. Underneath that Midwestern modesty is a hardheaded man with strong views. Early in his career (at a time when his office had comparatively little work), a couple requested a house designed in “an early American style.”

“You mean like a tepee?” responded Wexler impishly. End of interview.

He was also an enthusiastic adopter of prefabricated building technology a generation before the recent prefab craze set shelter books abuzz. He considers steel, glass, and concrete the most appropriate materials for desert buildings. “They’re inorganic, so they don’t take the beating of natural materials and don’t need the maintenance [required by other materials],” he explains.

The Alexanders in north Palm Springs are perhaps the best-known example of Wexler’s preference for inorganics. In collaboration with structural engineer Bernard Perlin, he built nine houses (followed by more than a dozen school buildings) using light steel, prefab construction.

Marduk “Duke” Sayad has spent much of the past seven years restoring an early Wexler masterwork on Lilliana Drive. Within a square-shaped plan, Wexler created an open-air atrium with plants (a motif often used by Los Angeles architect A. Quincy Jones) and wrapped the house around it, bringing sunlight into the center of the house through openings between the ceiling and interior walls. Sayad tapped the octogenarian architect to help him restore the structure.

“He was always relaxed and pleasant,” says Sayad, a graphic artist. And open-minded: Wexler had no objections to Sayad’s ideas for remodeling the kitchen and baths, even though some of those ideas, such as bath-room cabinets that tilt forward at an angle, might seem heterodox to midcentury purists.

Though he prides himself on being responsive to clients’ needs, Wexler claims he never compromised. “I guess for 50-some years [that] I was practicing, I was very lucky,” he says. “I didn’t get into disputes with clients. I was able to work with them and satisfy them without violating what I thought was good.”

Despite the disappointment of seeing some of his buildings insensitively altered (there are houses that he will no longer enter), Wexler sounds pleased about his career, particularly for the time when Palm Springs was a frontier of modernist building.

restrictions that buildings now have.

“The buildings in the desert have stood up very well,” Wexler continues. “The only regret is that I’m growing too old.”