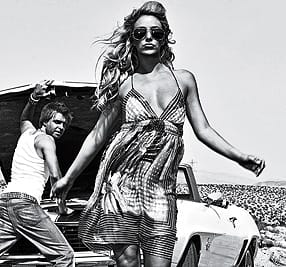 The media portray members of the all-girl band Danity Kane as little more than sex kittens with a vocal register. In fact, lead singer Aubrey O’Day can hardly stop talking about the upcoming election.

“It’s so important,” she says, going on to talk at length about charity work she has done around the world for children with AIDS, battered women, refugees, and other causes. The La Quinta native, launched to fame by the MTV reality show Making the Band, realizes the dichotomy of her life.

“Everybody thinks they know who I am based on the show,” she says. Like other reality programming, it relies on drama (with a capital D) and ego winning out over true human emotion. “I’d see something that wasn’t real, because obviously reality TV isn’t reality. Something was edited wrong and I’d think, ‘No, that’s not the way it happened!’ I used to take it so personally. Now I realize it’s just entertainment. It’s not personal. It took me being around other powerful females in the [entertainment] industry that are very secure and very criticized to get there.”

O’Day doesn’t look much like she’s in the biggest-selling pop girl-group on the planet. It’s a few days after her second album with Danity Kane claimed the top spot on Billboard’s album chart, selling more than 236,000 copies in one week, and she has slipped back into the Coachella Valley for a brief respite at her parents’ lakeside home. On television and in paparazzi shots, the 24-year-old often wears revealing outfits that leave little to the imagination, her hair and makeup ready for the nightclub. On this day, however, she wears a camouflage T-shirt and white shorts, her makeup largely nonexistent and her hair shorter than in her videos or in 2004 when hip-hop impresario Sean “Puffy” Combs selected her from a pool of 10,000 contestants to be part of his all-girl group. She looks for all the world like a graduate student on spring break.

The media have trained its lens on O’Day for nearly five years, first as a Making the Band contestant whose ambition, drive, and unwavering verve to make the final cut alternately endeared and chafed viewers of the reality program that centered on Combs finding and nurturing unknowns into formidable talents. Now, as the outspoken leader of Danity Kane, she is unafraid to butt heads with the powerful Combs in Band’s latest incarnation, which follows the often-contentious production of the group’s second album, Welcome to the Dollhouse, and subsequent tour. The artistic results have been legion for O’Day: two No. 1 albums filled with infectious hits, international popularity, and opportunities to dabble in acting and modeling. It’s how she always envisioned things — even if, when opportunity came knocking, she was already looking at another life altogether.

“I was graduating college, getting ready to go to Columbia for law school,” she says. After spending her childhood and teen years in La Quinta, O’Day was a student at University of California, Irvine. But, she notes, “I always wanted to be a star. I came out of the womb with heals on!”

She frequently performed alongside fellow Coachella Valley natives Alison Lohman and Tyler Hilton in shows at McCallum Theatre, landing prized roles in Annie, The Wizard of Oz, and The Sound of Music, among many others. Nevertheless, she had somewhat resigned herself to life outside the bright lights. “I went away to college because I felt like I was getting really competitive and really becoming not such a nice person,” O’Day says. “I just had to win, so that I became almost like a robot; and my life became very driven by success.”

Her lawyer mother finally forced her hand, e-mailing her when the Making the Band open call was posted in Los Angeles. “I was ready to go and become a lawyer. My bags were packed,” O’Day recalls. “And she e-mailed me and said, ‘Are you sure you don’t want to be a singer?’ She thought I would be miserable as a lawyer.”

O’Day outlasted thousands of other girls auditioning for one of five spots in the group that would become Danity Kane. For those who watched the show, it was evident that she was going through a transformation of her own, not only from being thrust into the media spotlight, but also for the sheer fact that she was growing up on camera, warts and all. If she missed a note, got emotional, had a hair out of place, a blemish on her cheek or, in later seasons, deigned to question Combs’ thoughts on the direction of the group, she did so in the open. Every show needs a villain, or at least a character willing to stand in the middle of the fray and start swinging. And as Making the Band progressed, that person often was O’Day, either through editing or through her desire to fight for artistic direction.

“The cameras are incredibly intrusive,” she says. “I had to learn a lot of lessons really quickly. The biggest one was to be comfortable with myself. When I watch the old episodes and watch the ones now, as much as I’ve been criticized, as much as I get criticized for who I am, I had to be that way. I had to be strong. I had to learn to love me, because everyone else in this industry will knock you down. You’re looked at as a product to everybody, and you better not screw up their money.”

Though Danity Kane’s eponymous first album was a huge success, spawning the infectious single “Show Stopper,” the criticism leveled at O’Day in the media and in the gossip blogs has at times been withering. Rumors abounded that she was pregnant with Combs’ child, that she’d left the group, that she’d been kicked out of the group, that she had joined the Pussycat Dolls — in essence, everything but the truth.

“I have always loved being part of Danity Kane,” O’Day says, brushing off any suggestion that she and Combs had anything but a professional relationship. If the show is any barometer, that relationship has been a difficult one. “Puff likes to push buttons,” she says, a level of resignation rising in her voice. “Absolutely.” That said, her own high-profile friendships with adult film star Jenna Jamison and reality siren Kim Kardashian have kept her front and center for gossip hounds.

The fame, however, has provided O’Day a platform to achieve lofty goals. “I want to affect as many people as I can. That’s my mission statement,” she says. “I hope I can use this status I have, this situation, to make the world better. Danity Kane is doing something together that we couldn’t do by ourselves.”

From a business point of view, the results are already in: Danity Kane is the first all-girl group to have their first two albums hit No. 1 upon release. Not the Supremes. Not the Go-Go’s. Not Destiny’s Child. Only Danity Kane.

That’s not to say it’s been all champagne and roses. After the first album, Danity Kane fell victim to unscrupulous financial advisers and had the indignity of being fired by their own manager via text message. In short, they were being called a one-hit wonder before they even had a chance to make a second record.

“We were broke,” O’Day reveals. “All of our money was gone. Our financial advisor was taken away to jail on tax evasion. No one was returning our calls. No one at our label [the Combs’ owned Bad Boy] cared about us.” But the group stayed together, even when it felt like they were sure to break apart. Together, the women found a new voice in their second album: a tougher, more mature tone.

“I don’t believe in nonsense in anything that I do,” O’Day says. “Whatever I do, it has to be something I’m 100 percent passionate about.”

That attitude rang true a few days later when Danity Kane performed their first local concert at a daylong festival at the Indio Fairgrounds celebrating the 10th birthday of U92.7, the local hip-hop station. Six thousand fans chanted along while the members of Danity Kane, in scant black outfits, electrified the crowd with their biggest hits and seductive choreography. “This show wasn’t even on our books, but they [U92.7] have always shown us the most love,” O’Day says. “They play our songs more than anyone, so it was a must.”

Still, even she recognizes that the vagaries of the music industry, the precipitous nature of fame, and, naturally, the desires of the performer herself make for an uncertain future. But O’Day looks forward to the possibilities. “I’m not asking for a story that ends well,” she says. “I’m just asking for a great story. I don’t need a good ending.”