Palm Springs nightlife | The Service is the Show 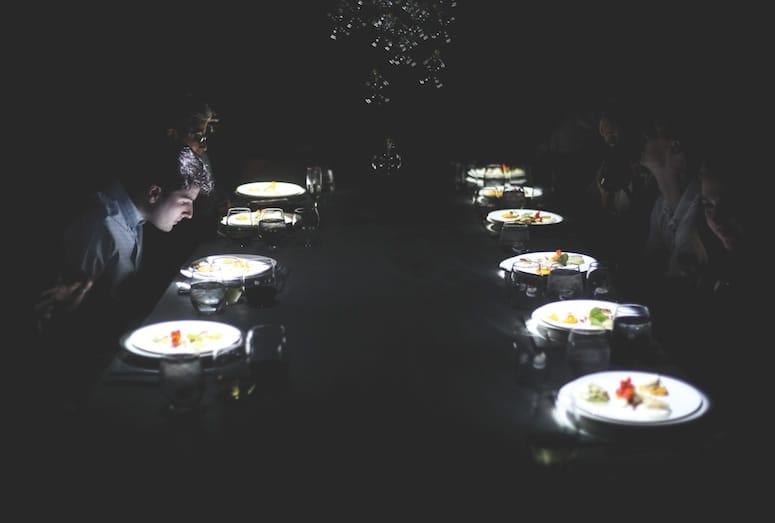 Light serves up a parade of flavors over six entertaining courses produced by PS Underground.
Photos by JimPlusKelly.com/Palm Springs Underground

Dressed in white Cirque-style tights and stretched across the center of a long dining table, two, er, waitresses (apologies) lie motionless while 16 guests enter from the bar, jaws agape, finishing their cocktail-hour chatter and taking a seat.

The six-course dinner — and, evidently, a show — is about to begin.

Few people here knew one another before the cocktail hour. They’re a flavorful mix of in-the-know locals, wide-eyed visitors, and adventurous foodies with at least one thing in common: They have no idea what to expect in the hours ahead. Doubling as performance artists, the waitstaff at Light delighted diners as much as the cuisine.

They’re here for Light, an “avant-garde dinner event” produced by PS Underground, which has created culinary experiences in the desert since 2013 — from a picnic at the polo grounds to a full-scale re-creation of the last dinner on the Titanic. It’s the hobby-turned-business of chef David Horgen and theatrics whiz Michael Fietsam (who also has an appreciable food service résumé).

“We create an environment to engage all the senses — the room temperature, how it smells and sounds, whether the music is conducive for conversation, and how the food matches the theme — all without any one part overpowering the others,” Fietsam says. Michael Fietsam (right) applies some touches to a dish.

The business evolved from dinners he and Horgen threw for friends at their house in the Cove neighborhood of Cathedral City. “One was a Passage to India theme,” Fietsam says. “We moved all of our living room furniture out, and we had belly dancers, a hookah den, and a six-course dinner on the floor.”

Guests at Light knew only to wear white. Everything else would be a surprise. “I liken it to before you go on a vacation,” Horgen says. “Half of the fun is the anticipation of what will happen. It adds suspense. People really like that.”

Diners can indicate dietary restrictions when they make reservations online. “If someone can’t eat seafood, I might replace a scallop with a piece of chicken cut into the shape of a scallop to accommodate in a way that’s discreet, so all plates look the same,” Horgen says. The appetizer this night is crostini with Brie cheese and olive tapenade.

At Light, the contortionist waitstaff serves the wine and appetizer — crostini with Brie cheese and olive tapenade — and then the first course comes out: heirloom tomato and roasted beet salad with burrata cheese, pomegranate vinegar, Turkish olive oil, and Hawaiian sea salt.

The second course — wild mushroom and black truffle bisque, scented crème fraîche, dry sherry, and toasted pistachios — comes with a side of live jazz and a light show on the table.

The third course is scallops on a trio of purées and sauces: a cilantro vinaigrette on a bed of sweet pea and mint purée, a lemon cream sauce on a bed of carrot and green apple purée, and a nutty brown butter on a cauliflower and rutabaga purée — with a bitter greens salad with citrus vinaigrette and clover honey.

“We time the courses to music and sound cues,” Fietsam says. After a palate cleanser of a blend of frozen grapes topped with prosecco, the fifth course arrives with a large portion of Hollywood drama. The lights go out, and a spotlight hits each diner’s crystal dome–covered plate as they’re placed.

When all 16 are illuminated, the waitstaff lifts the covers to reveal the slow-braised beef short ribs; herb- and wine-infused couscous; tomato, root vegetable, and red wine reduction; and French green beans.

“There’s no model for what we do,” Fietsam says. “But we have a lot of ideas. It’s great to give people a memorable experience, and make them happy.”