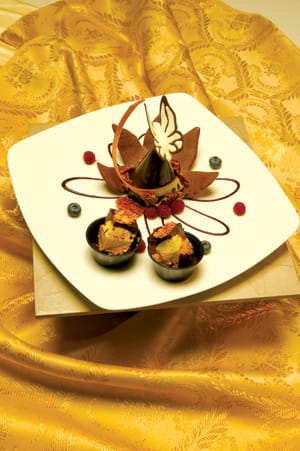 Pamela Anderson and Kid Rock? Crashed and burned. Britney and K-Fed? Splitsville. Doesn’t love endure? Sure it does. The love we’ve had for chocolate has lasted for 5,000 years. And you know what? It’s still a thrill.

Civilization could exist without chocolate. But it would not be much fun. The Mayans were mad for it. They discovered cocoa beans sometime in the sixth century and thought the gods were doing them a big favor. Who’s to say they were wrong?

The Mayans crushed cocoa beans and whipped them up with water, creating a dark brew that was no cup of instant cocoa but an earthy drink they used as sacrament. They had gold, but who cared? They
valued cocoa beans more. It served as Mexican currency until 1887.
The Aztecs were no less taken with chocolate, particularly their leader Montezuma, history’s first known chocoholic. He was known to drink 50 cups of cocoa before visiting his harem — Viagra, shmiagra.
Whether it was chocolate’s exquisite flavor or what it could do for lovers in the bedroom, the Spanish conquistadors knew a great thing when they tasted it. They brought cocoa beans back to their homeland, and everyone decided this New World deserved checking out.

It can also make you healthy. Pure cocoa beans contain twice as many antioxidants as red wine and three times more than green tea. Chocolate’s antioxidants, called flavanols, provide exquisitely edible health benefits. They help control cholesterol, lower blood pressure, and perform other cardiovascular functions.
Chocolate’s loaded with magnesium, too. No other food has as much, and it’s by far sexier than kelp, your other major magnesium player. Magnesium is the trace element 80 percent of Americans lack, and this mineral deficiency has been linked to every neuro-ailment from migraines to aggression. Why go ballistic when you can go for bittersweet?

Mireille Guiliano, that famed French woman who doesn’t get fat, won’t live without it. “Chocolate is my ‘drogue’ with no negative side effect and it always puts me in a delicious mood,” Guiliano says. She even thinks it should be covered by health insurance, “but that is a very French public policy perspective.”

Chocolate Art
Much of the world has proudly gone public with its chocolate addiction, making chocolate not shameful but chic. Couturiers including Carolina Herrera and Sonya Rykiel have happily outed themselves as chocoholics. Rykiel has even designed her own chocolate line.

Confectioners including San Francisco’s Michael Recchuiti, Katrina Markoff of Vosges in New York, and Paris’ Michel Cluizel have gotten in line, too, creating chocolates adorned with gold leaf, embellished with infinitesimal filigree, stenciled with flowers and fruit, and painstakingly molded into everything from bunnies to breasts. None would look out of place in a jeweler’s window, and all of it’s entirely, desirably edible. These confectioners not only design chocolate, they also believe in chocolate’s ability to awaken body and soul.

The Knox Family makes chocolates by hand and without preservatives, using the finest, freshest ingredients and the creator’s original recipe. While they ship all over the country, they’re proud of their ties to Palm Springs — and to chocolate. “It’s a romance. It’s a relationship,” owner Rob Knox says.
The romance begins even before you eat it. Unwrap the chocolate of your choice. Breathe in its fragrance. The notes are low, earthy, intense. Place the chocolate on your tongue. Creamy and luscious, it fills your mouth and slowly melts. “There’s this sensual experience,” Knox says. Oh, yeah. That’s the PEA kicking in.

The first taste hints of nuts and brandy and then grows and intensifies with hints of vanilla, coffee, spice, flowers, and fruit. Chocolate rivals only wine in complexity. It has a range of flavors, and all of them are delicious. No wonder we love it — it’s nature decocted and delightful.

Science or sensual pleasure, it hardly matters — love needs no reason. It’s surrender, it’s joy. And when it comes to love of chocolate, it’s enduring. What’s more, chocolate loves us right back.