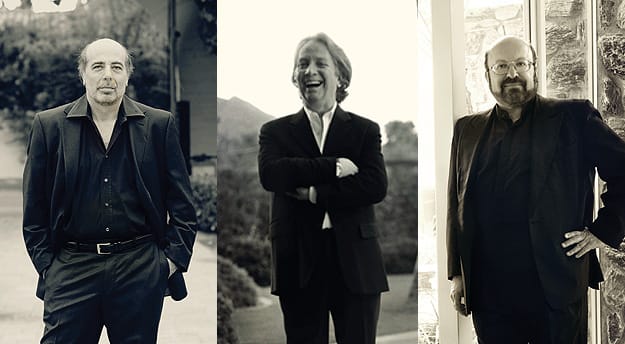 For the Desert Symphony’s season opener in November, Gary Berkson conducted the orchestra in concert with popular swing band Big Bad Voodoo Daddy — a wild departure from the classical scores of the Royal Swedish Ballet and Royal Swedish Opera, where he was longtime resident conductor.

When he was 14, John Bayless — the youngest church organist in his home state of Texas — wove strains of “Devil With a Blue Dress On” into a standard hymn or played “House of the Rising Sun” as a Bach invention to gain the attention of classmates sitting in the back row of the Baptist church in Borger, where he grew up.

Within a two-year period, these edgy innovators converged on the desert to lead a trio of prominent music establishments. After striking up an e-mail friendship with the late Desert Symphony founder Ben Benachowski, Gary Berkson met the popular conductor during one of his frequent trips to Southern California. (A California native, Berkson also serves as music director and conductor of The Peninsula Symphony in Palos Verdes.)

Benachowski’s widow, Marilyn, and symphony President Nancy Tapick invited Berkson to conduct last April’s concert with violinist Elizabeth Pitcairn and Brett Duebner on viola. That’s when the Juilliard School of Music graduate (one of the alumni featured in the school’s centenary publication Dance, Drama, Music: 100 Years of the Juilliard School) and wife Annika, a dancer and teacher with the Royal Swedish Ballet, welcomed the idea of moving to the desert after three decades of working and living in six of Europe’s coldest countries.

Although he works in a smaller arena, Berkson revels in the considerable assets local audiences reap because of the area’s proximity to Los Angeles.

“I am not concerned that it has to be the Met or a philharmonic,” he says, “because our symphony is staffed entirely with seasoned, professional musicians from all over Southern California — many which regularly do studio work and who can just walk in, sit down, and play. All they have to do is turn on the microphone.

“These musicians like to work hard, especially for someone they consider to be in control and who is doing good musical work,” he continues. “There’s a theory in the industry that orchestras like to test new conductors, but I did not find that to be true here.”

Although most of The Desert Symphony’s lineup was inked by the time Berkson ascended the podium, he did have input about the Dec. 17 holiday show. “Everything else had been covered,” he says, “and plans were to present a concert of traditional holiday music.

“Considering the eclectic nature of the rest of the season’s offerings —country, Gershwin, Latin, the ’60s and ’70s, a Michael Jackson tribute — I thought it would be a great time to do a different kind of holiday show, so it’s going to be a Motown show with The Contours.

“There’s very little in music that I don’t like,” Berkson says, “and it all offers something different that helps define me musically. My responsibility is to put something good on stage. I’m an equal opportunity conductor.” For all of the impressive notches in his opera-conducting belt, Valéry Ryvkin is a realist when it comes to the popular appeal of the genre.

He recognizes that some scores engage audiences more than others — such as Mozart’s "Die Zauberflöte" ("The Magic Flute"), which he conducted for the first time recently in Greensboro, N.C., as artistic director of the city’s opera company. “I have to say I adored it,” Ryvkin says. “It was refreshing.”

Another refreshing experience awaits him when he raises the baton for the daylong Opera in the Park on March 27, 2011, spotlighting some of the Southwest’s brightest new talent. It will mark the second year Ryvkin has lent his skills to Palm Springs Opera Guild’s popular event, now in its 13th year. “It is so important for young, would-be performers to experience the audition process for the Palm Springs opera competition,” he says.

“One of the deciding factors in who performs at Opera in the Park — part of a prize for that competition — is career potential, because if they succeed at this level, it means financial help and more opportunities to perform elsewhere.”

While Ryvkin may find it hard to believe the desert has 5,000 die-hard opera fans who would clamor to attend, for example, "The Maid of Orleans" (the Russian production with which he made his European debut last year in Germany), he sees potential in the informal ambiance of Sunrise Park attracting those whose musical tastes lie elsewhere. “They might say, ‘Hey, this is not that scary; we should try opera sometime.’”

And they would be among the converts making opera the fastest-growing performance art in the country, enjoying a 35 percent increase in its audience in the past decade, according to The New York Times.

If Ryvkin could make an opera sound like Broadway by putting a big orchestra and big voices behind it (as in "Séance on a Wet Afternoon"), then further decoding it with a series of youthful vocals under blue skies and sunshine is all to the greater good of the art.

REBEL WITH A CAUSE According to John Bayless’ formula, if a musical composition engages an audience or challenges a player, he’s game.

The prodigy, who was studying at Juilliard when he was 17, attributes much of his mindset to friend and mentor Leonard Bernstein, longtime music director of the New York Philharmonic, who was on faculty for the inaugural class of NYU’s musical theater masters program when Bayless was invited to participate as a composer.

“Leonard was an egalitarian about music in that he didn’t segment it by type, only by quality,” Bayless says. “It was either good or bad.” Bernstein’s broad-based thinking and encouragement helped Bayless realize critical and commercial recognition.

“I’ve always been a rebel,” the concert pianist and composer says in talking about his crossover success with "Bach on Abbey Road", named by Billboard Magazine as one of the top 10 classical crossover recordings of the 1980s.

“I was originally concerned when this album was released, because I thought the classical snobs would think it was a party trick. In the classical world, music is pigeonholed; it can be played in only one way.”

A different kind of success story has played out for Bayless since he suffered a stroke shortly after moving to the desert from Marin County in 2008. While the road back to normal will never lead to its former definition in Bayless’ life, it has positioned him in a new normal in which music still plays a central role.

Through a series of chance encounters that began in the stroke rehabilitation unit at Desert Regional Medical Center, Bayless was invited to serve as composer in residence on the board of the Virginia Waring International Piano Competition.

The biennial competition, which begins March 27, 2011, hosts aspiring pianists from around the world for a week of competitions, master classes, and concerts. Bayless is composing two pieces — one for junior and one for intermediate musicians — that he hopes will propel these technically competent youngsters from their comfort zone into a more interpretive frame of performance, stretching the boundaries of the predictable to the improbable.