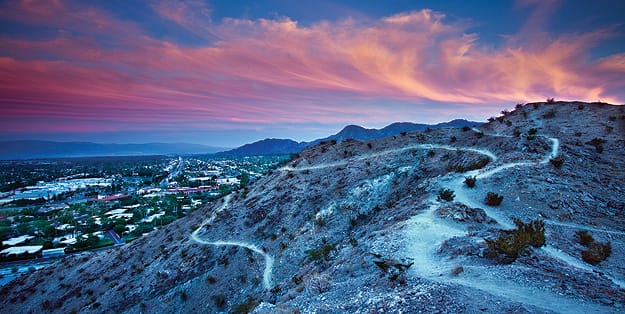 Ryan Stendell climbs the Bump and Grind Trail with a post driver stuffed in his snowboard pack, a signpost lashed to the pack, and a post digger in hand. At the top of the hill, the Palm Desert city employee halts and hammers in the sign — “No Dogs” — as speedy hikers listening to iPods whiz past. Then he heads back down the trail, his load only slightly lightened.

Before Stendell reaches the trailhead, the new sign has been uprooted and tossed down the hill, joining others littering the gullies. Stendell will start again. It’s all part of working the urban edge, the place where wilderness and civilization meet in the Santa Rosa & San Jacinto Mountains National Monument.

Palm Desert and La Quinta claim an unusual concentration of urban fringe trails, a cluster seen in only a few places around the country, such as Boulder, Colo. Compared to the backcountry, there are more rules and signs here — and more disputes about rules and signs. Overall, it’s a civilized place. Bureau of Land Management Ranger Wesley Miller says the biggest issue is hikers who leave their dogs’ waste on the trails.

Another ongoing area of dispute is dog bans, meant to protect the endangered Peninsular bighorn sheep. Only a few anarchists actually take out their frustration on the signs. Some hikers say they’ve encountered sheep and insist the dogs do not disturb the wild animals. Yet monument Manager Jim Foote says heart rate telemetry data suggests otherwise. Officials worry that when the hikers go home, sheep will vacate an area necessary to their survival.

Along with bootleg trails carved by so-called “social hikers,” Palm Desert has built a network of new trails along the town’s lowlands. Former Mayor Buford Crites, now president of Friends of the Desert Mountains, wanted to avoid allowing Palm Desert to become “landlocked,” like Indian Wells and Rancho Mirage, with no access to the monument trails. His job: “convincing a majority of the City Council [that] trails were a good investment.”

The city purchased five-acre jackrabbit homestead parcels, patching together vacant land and creating trails with historic names like Hopalong Cassidy, named for the cowboy actor, and Herb Jeffries, another Western star. The trailheads feature amenities like shade palapas and water fountains for dogs. If Crites and others have their wish, someday still more trails will link Palm Desert to La Quinta and the Salton Sea.

While some council members remain unconvinced trails were essential, hikers think otherwise. The trailheads are busy every morning, even when city tennis courts are not. Trails cost less to build and maintain than tennis courts and swimming pools, Crites says.

The City of La Quinta also decided to emphasize access to trails after surveying residents about their desires for the community. Kay Wolff, widow of the city’s first mayor, Fred Wolff, says her husband was so dedicated to natural landscape that he threatened to chain himself to a tree when the wash by their house was being bulldozed.

When developers tried to buy that wash, on the west side of the cove, activists stepped in and founded The Fred Wolff Nature Preserve. The Bear Creek Trail meanders along the preserve.

From here, hikers can merge into the backcountry of the monument. Those who head out on the Boo Hoff Trail (La Quinta Cove) or the Art Smith Trail (accessed from the Palm Desert Visitors Center) should not assume the trails are as well-patrolled as the Bump and Grind. These long traverses call for backcountry skills, overnight emergency rations, map- and/or GPS-reading abilities, and maybe snake gaiters for good measure. Before you head out on any monument trail, stop by the monument Visitors Center on Highway 74 and ask about trail closures due to bighorn sheep lambing. “It’s all about ‘know before you go,’” advises monument Recreation Technician Stacey Wellman.

The Boo Hoff and Art Smith trails began as remnants of ancient Indian trails that were expanded and maintained by an equestrian group called Desert Riders, formed in 1930 and still going strong. Members were the original “social hikers.” They gathered for breakfast and moonlight rides, scaring up the wild ponies, then living in the mountains. Their mission was to build and maintain trails, but partying was a close second. They toasted their completed projects with champagne carried in by packhorse.

Unlike modern social trail users, Desert Riders disdained the running shoe and the fat tire (not that they had mountain bikes then). “Man on foot ain’t no man at all,” says Desert Riders member Ray Corliss.

One of the original Desert Riders, Jane Hoff, remembers riding her horse to scout the Art Smith Trail when the club was building the route. She’d lose the faint Indian path, circle back, lose the trail again, and circle back.

Today, a popular trail guide calls the Art Smith the “grand tour” of the desert wilderness. You leave the malls and gyms behind. Hike eight miles and the Art Smith will take you to Dunn Road and the “dead tractor” memorial — a broken-down dozer used to build the gated dirt road.

The Boo Hoff has an even wilder feeling, with its ancient rock cairns and abundant yucca and cactus. Quail and rabbits skitter ahead of your feet. Go high enough and you can see the Salton Sea and Joshua Tree National Park, as well as twisting arroyos with names like Lost Canyon and Devil Canyon. Named for a late trail boss of the Desert Riders (Jane Hoff’s husband), the Boo Hoff leads to the faintly marked Guadalupe Trail — the best place to see fat ocotillo in season. Author J. Smeaton Chase once said the red blossoms light up with “fierce, fatal beauty.”

At 7:11 a.m. on a weekday, 30 cars — BMWs, shiny Mustangs — are parked behind the Target store in Palm Desert. This is the trailhead to the Bump and Grind, the most heavily trafficked trail in the monument. A cast-off T-shirt or two hang artfully from the creosote bushes. Delivery trucks beep.

Fresh deodorant scents the morning air, as hikers pull on shoes, insert water bottles into holders, set iPods, strap heart monitors to biceps, and set out singly. They call this a social trail, but no one is chatting. It’s social only in the sense that others sweat within view.

A line of red and orange shirts toils up a long grade still in shadow at this hour. The Grinders look like builders of the pyramids, laboring single file with their stone blocks. They reach the switchbacks, their heads drop with effort.

On a winter day, Wellman encounters as many as 200 people on the Bump and Grind.

Some purists disdain the workout trail. But even people who come here for work return for play. Stendell rides his mountain bike here several days a week after work. Miller sheds his ballistic vest and ditches his badge to hike the Bump and Grind for leisure. La Quinta Cove residents, rich in their own trails, regularly trek here, too.

Stendell says monument and city staffs are still learning about this new world of social trails. So far, one thing is certain: Here on the urban edge, everyone bumps and grinds.