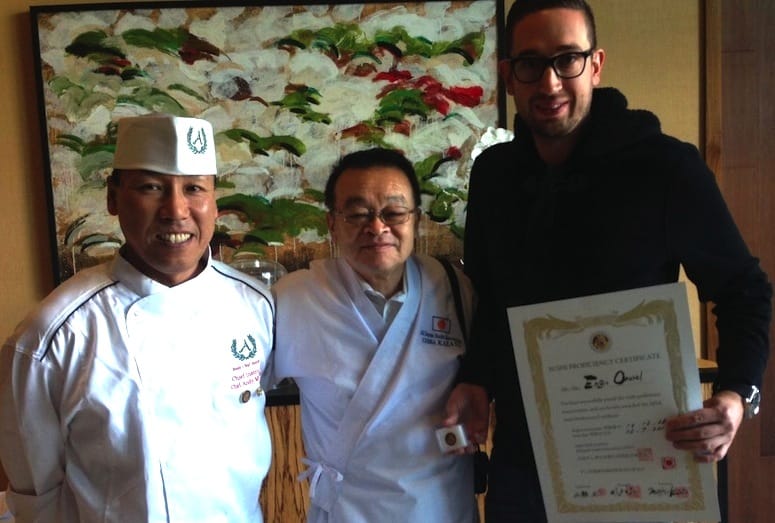 The 33-year-old owner of The Venue Sushi Bar & Sake Lounge on El Paseo has accomplished the first of three steps in his ascent to becoming a Master Sushi Chef.

Onural earned a sushi proficiency certification from All Japan Sushi Association, recognized by the Japanese government, an honor for any sushi chef, but especially for a non-Asian. Onural trained under his sensei (mentor) Andy Matsuda, and was certified under rigorous testing by AJSI director Masayoto Kazato from Japan.

The certification means that Onural can now teach sushi and already gave his first sushi class – The Art of Sushi Making 101 — at his dramatic yet intimate 50-seat restaurant. “This is a big honor,” says Onural. “It tells the world about what you are doing. It certifies that I know how to make all the traditional sushi. I am the only certified sushi chef in the Coachella Valley.”

But Onural has never rested on tradition. His inspiration comes from a multi-cultural background and highly accomplished family that play a significant part in raising the bar for himself and his restaurant.

“The first year we won Best of the Best sushi restaurant from Palm Springs Life, which raised the bar for me,” says Onural. “The second year, we won again, so that raised the bar even more. People now expect the best from me and my restaurant. The level keeps going up.”

American born of Turkish parents, Onural returned with them to Turkey where he grew up, but continued to visit the United States often, including summer vacations on the west coast. “I consider myself 100 percent American and 100 percent Turk,” he said.

Both parents are highly educated – a university professor and a dean – and always have high expectations of their son. When only 10 years old, Engin told them he wanted to pursue the culinary and hospitality industry.
He remembers, “My parents looked me straight in the eyes and asked ‘Are you sure this is what you want to do?’ I said, ‘Yes,’ then my father said, ‘Whatever you choose to do, be the best you can be.’”

This certification verifies Onural’s accomplishments thus far. But he hopes to achieve the level of Master Sushi Chef before he is 35, which he likens to “getting my PhD in restaurants.”

He says the first 10 years in the industry were his “life school;” the last three years when he opened up his own restaurant he considers his Master’s degree.

At 22, Onural left his home, friends and family to arrive in Los Angeles’ Little Tokyo to apprentice as a sushi chef at Sushi Skill Institute. He later came to the Coachella Valley at the Marriott Desert Springs where he honed not only his creative sushi making skills, but people and business skills as well. Three years ago he opened The Venue on El Paseo.

But how was this Turkish-American inspired by sushi?

Onural says he is experimenting with “molecular cuisine”, creating caviar out of soy, for example, or his jellied “tear drop” mojito that explodes in the mouth. He plans to open another restaurant in Palm Springs in the coming year – “a new baby born, and double the headaches,” he said.

But Onural considers himself fortunate to do “what I love, I am very grateful.  I cannot wait to open the door of my restaurant every day, just as I am glad to get out the door at the end of the evening. The day I lose my passion, that is the day I will close the restaurant.”